Disinfection is the elimination of microorganisms from inanimate objects or surfaces.

Disinfection is the elimination of microorganisms from inanimate objects or surfaces. The term disinfectant is used for an agent used to disinfect inanimate objects or surfaces but is generally toxic to use on human tissues. Antiseptic refers to an agent that kills or inhibits growth of microorganisms but is safe to use on human tissues.

Antibiotics produced by microorganisms which kill or inhibit the growth of other microbes.

Basic terms used in chemical control of microorganism are mentioned in Table 3.1 and Table 3.2 Describes the difference between Bactericidal and Bacteriostatic agents.

Disinfection: The selective elimination of certain undesirable microorganisms to prevent their transmission directed against their metabolism or structure; applies to the use directly on inanimate objects.

Antisepsis: Prevention of the growth or activity of microorganisms by inhibition or killing; applies to the use of chemicals on living tissue

-cide: Suffix used to denote agents, usually chemical, that kill. Commonly used terms are bactericide, fungicide, virucide, and algicide. The term germicide is used if the agents kill pathogens but not necessarily spores. An agent that kills bacterial spores is a sporicide.

-static: Suffix used to denote agents, usually chemical, that prevents growth but do not necessarily kill the organism or bacterial spores. Commonly used terms include bacteriostatic and fungistatic.

Table 3.2: Difference between Bactericidal and Bacteriostatic 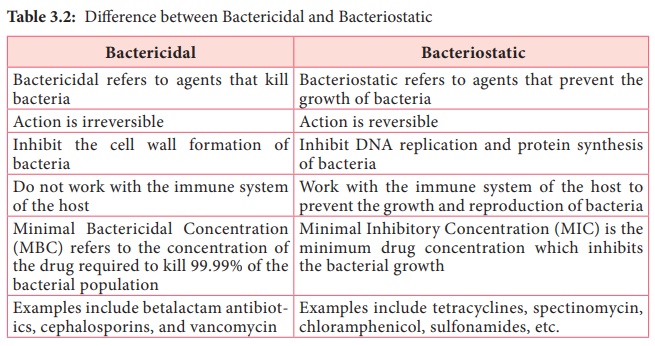 • Do not work with the immune system of the host

• Minimal Bactericidal Concentration (MBC) refers to the concentration of the drug required to kill 99.99% of the bacterial population

• Bacteriostatic refers to agents that prevent the growth of bacteria