Home | | Prestressed Concrete Structures | Different types of joints used between the slab of prestressed concrete tank
Posted On :  29.07.2016 03:26 am 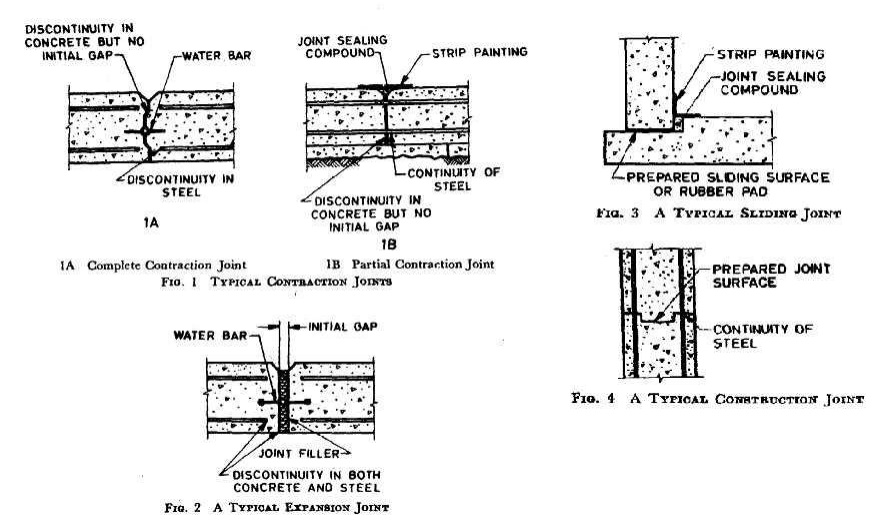 Joints shall be categorized as below:

Joints shall be categorized as below:

a) Movetnent Joints - There are three categories of movement joints:

contraction joint - A movement joint with a deliberate discontinuity but no initial gap between the concrete on either side of the joint, the joint being intended to accommodate contraction of the concrete ( see Fig. 1 ).

Expansion joint - A movement joint with complete discontinuity in both reinforcement and concrete and intended to accommodate either expansion or contraction of the structure (see Pig. 2).

In general, such a joint requires the provision of an initial gap between the adjoining parts of a structure which by closing or opening accommodates the expansion or contraction of the structure. Design of the joint so as to incorporate sliding surfaces, is not, however, precluded and may sometimes be advantageous. 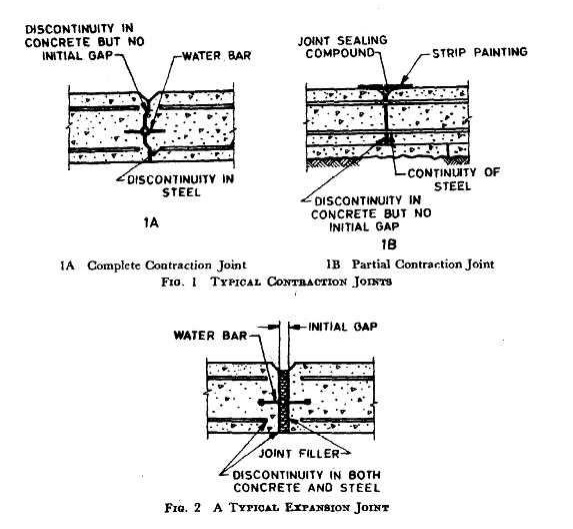 b) Construction Joint-A joint in the concrete introduced for convenience in construction at which special measures are taken to achieve subsequent continuity without provision for further relative movement, is called a construction joint. A typical application is between successive lifts in a reservoir. 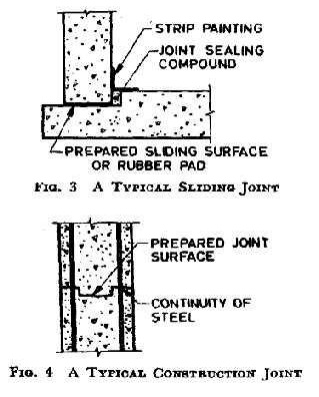 The position and arrangement of all construction joints should be predetermined by the engineer. Consideration should be given to limiting the number of such joints and to keeping them free from possibility of percolations in a similar manner to contraction joints.

c) Temporary Open Joints - A gap temporarily left between the concrete of adjoining parts of a structure which after a suitable interval and before the structure is put into use, is filled with mortar or concrete either completely ( Fig. 5A) or as provided below, with the inclusion of suitable jointing materials ( Fig. 5B and SC). In the former case the width of the gap should be sufficient to allow the sides to be prepared before filling.

Where measures are taken for example, by the inclusion of suitable jointing materials to maintain the water tightness of the concrete subsequent to the filling of the joint, this type of joint may be regarded as being equivalent to a contraction joint ( partial or complete ) as defined above.

(b) Design the circular tank (only procedure.

in the construction of concrete structures for the storage of liquids, the imperviousness of concrete is an important basic requirement. Hence, the design of such construction is based on avoidance of cracking in the concrete. The structures are prestressed to avoid tension in the concrete. In addition, prestressed concrete tanks require low maintenance. The resistance to seismic forces is also satisfactory.

Prestressed concrete tanks are used in water treatment and distribution systems, waste water collection and treatment system and storm water management. Other applications are liquefied natural gas (LNG) containment structures, large industrial process tanks and bulk storage tanks. The construction of the tanks is in the following sequence. First, the concrete core is cast and cured. The surface is prepared by sand or hydro blasting. Next, the circumferential prestressing is applied by strand wrapping machine. Shotcrete is applied to provide a coat of concrete over the prestressing strands.

The analysis of liquid storage tanks can be done by IS:3370 - 1967, Part 4, or by the finite element method. The Code provides coefficients for bending moment, shear and hoop tension (for cylindrical tanks), which were developed from the theory of plates and shells. In Part 4, both rectangular and cylindrical tanks are covered. Since circular prestressing is applicable to cylindrical tanks, only this type of tank is covered in this module.

The following types of boundary conditions are considered in the analysis of the cylindrical wall.

a) For base: fixed or hinged

b)  For top: free or hinged or framed.

Fixed: When the wall is built continuous with its footing, then the base can be considered to be fixed as the first approximation.

Hinged: If the sub grade is susceptible to settlement, then a hinged base is a conservative assumption. Since the actual rotational restraint from the footing is somewhere in between fixed and hinged, a hinged base can be assumed.

The base can be made sliding with appropriate polyvinyl chloride (PVC) water-stops for liquid tightness.

Free: The top of the wall is considered free when there is no restraint in expansion. Hinged: When the top is connected to the roof slab by dowels for shear transfer, the boundary condition can be considered to be hinged.

Framed: When the top of the wall and the roof slab are made continuous with moment transfer, the top is considered to be framed. The hydrostatic pressure on the wall increases linearly from the top to the bottom of the liquid of maximum possible depth. If the vapour pressure in the free board is negligible, then the pressure at the top is zero. Else, it is added to the pressure of the liquid throughout the depth. The forces generated in the tank due to circumferential prestress are opposite in nature to that due to hydrostatic pressure. If the tank is built underground, then the earth pressure needs to be considered. The hoop tension in the wall, generated due to a triangular hydrostatic pressure is given as follows.

The hoop tension in the wall, generated due to a triangular hydrostatic pressure is given as follows.

In the previous equations, the notations used are as follows. CT = coefficient for hoop tension

w = unit weight of liquid H = height of the liquid

Ri = inner radius of the wall.

The values of the coefficients are tabulated in IS:3370 - 1967, Part 4, for various values of H2/Dt, at different depths of the liquid. D and t represent the inner diameter and the thickness of the wall, respectively. The typical variations of CT and CM with depth, for two sets of boundary conditions are illustrated.

of them are mentioned.

1)   The computed stress in the concrete and steel, during transfer, handling and construction, and under working loads, should be within the permissible values as specified in IS:1343 - 1980.

Values of limiting tensile strength of concrete for estimating the cracking load are Specified in the Code.

3)  The ultimate load at failure should not be less than twice the working load.

5) There should be provisions to allow for elastic distortion of the structure during prestressing. Any restraint that may lead to the reduction of the prestressing force, should be considered.