Depression: Pharmacotherapy and Other Somatic Treatment

Treatment during the acute phase with medication is highly efficacious in reducing signs and symptoms of MDD.

Pharmacotherapy and Other Somatic Treatment

Treatment during the acute phase with medication is highly effi-cacious in reducing signs and symptoms of MDD. Antidepressant medication has the most specific effect on reduction of symptoms and is often associated with improved psychosocial functioning. When symptoms of depression are mild to moderate, a course of depression-specific psychotherapy without medicine may also be effective. If symptoms of depression are moderate to severe, acute phase treatment with medications is often indicated. A wide variety of antidepressant medications have been documented as effective in moderate to severe MDD.

Antidepressant medications which are currently available for acute treatment of MDD are listed in the associated table (Table 46.3). 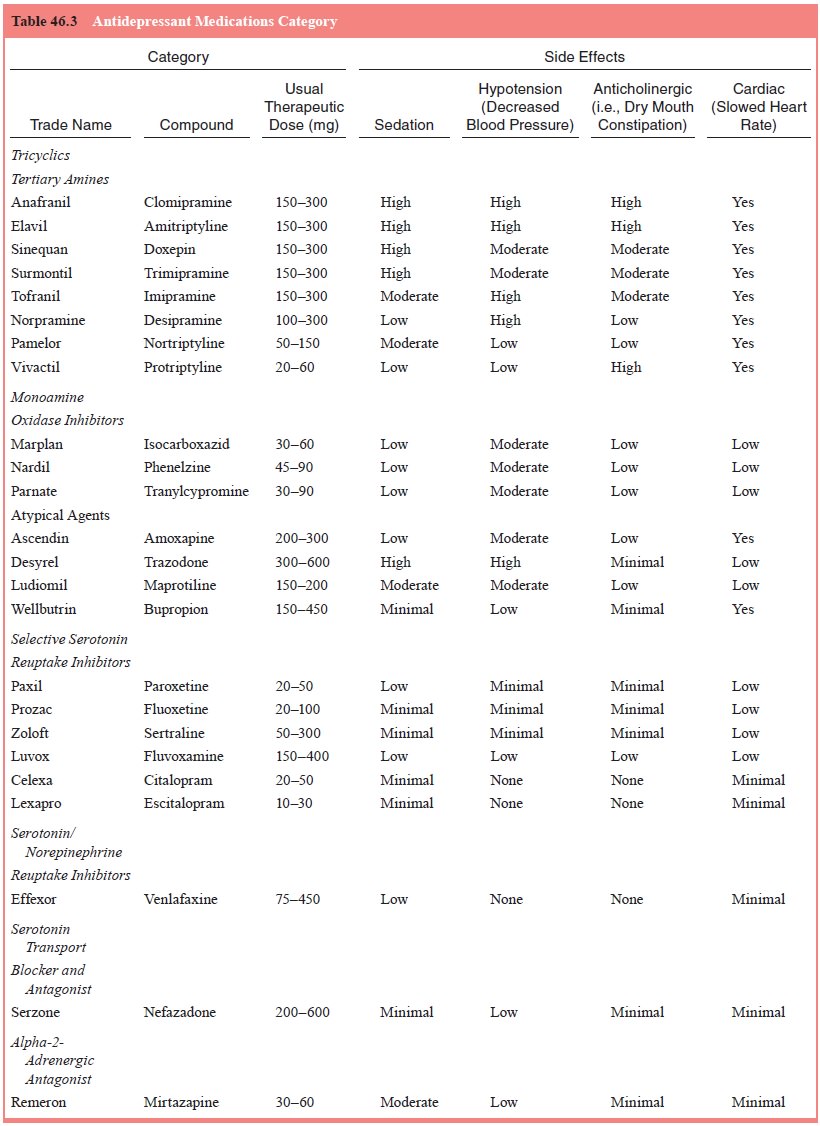 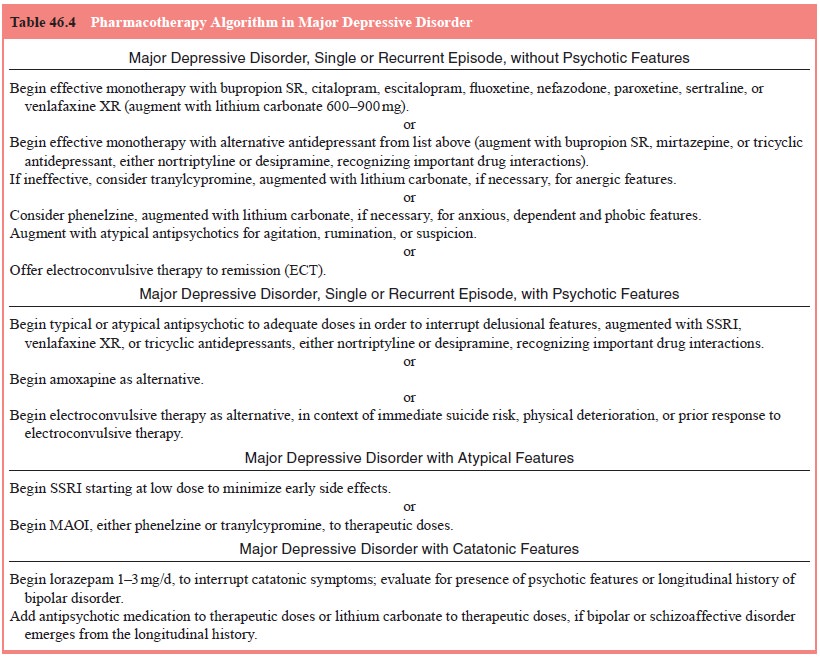 Choice of treatment with a specific antidepressant treat-ment in a given clinical situation is based on prior treatment response to medication, consideration of potential side effects, history of response in first-degree relatives to medicines, and the associated presence of cooccurring psychiatric disorders that may lead to a more specific choice of antidepressant treat-ment. Table 46.4 illustrates an algorithm developed for pharma-cotherapy of MDD which includes a staged trial of newer medi-cations (because of their superior side-effect profiles) followed by treatments with older medicines available for the treatment of MDD. The ultimate goal of pharmacotherapy is complete remission of symptoms during a standard 6- to 12-week course of treatment.

The most commonly prescribed antidepressant medicines in the past 10 years are SSRIs. They are selectively active at se-rotonergic neurochemical pathways and are effective in mild to moderate nonbipolar depression. They may also be particularly effective in MDD with atypical features as well as DD. Often these treatments are well tolerated and involve single daily dos-ing for MDD. Because of selective serotonergic activity, these treatments have also been demonstrated to be effective with cooccurring OCD, panic disorder, generalized anxiety disorder, PTSD, premenstrual dysphoric disorder, bulimia nervosa, so-cial anxiety disorder, as well as MDD. They tend to be reason-ably well tolerated in individuals with comorbid medical con-ditions. There are particular medication-specific interactions based on inhibition of cytochrome P-450 liver enzyme systems which require attention if an individual is taking other medica-tions for primary medical conditions or associated psychiatric conditions. The currently available SSRIs in the USA include fluoxetine, paroxetine, sertraline, fluvoxamine, citalopram and escitalopram.

In addition to SSRIs, greater attention has been brought to medi-cines with dual noradrenergic and serotonergic pathways includ-ing venlafaxine which has become available in both immediate release (IR) and extended release formulations. In addition, an alpha-2-adrenergic agonist, mirtazapine has become available, as well as a serotonin transport blocker and antagonist nefazodone. Recent concerns about hepatic complications associated with nefazodone has required liver function monitoring. A predomi-nantly noradrenergic and dopaminergic agonist, bupropion is also available in an immediate release and sustained release (SR) preparation. The newest dual acting antidepressant marketed in the USA is duloxetine.

Tricyclic Antidepressants in Individuals with Severe MDD Including Melancholic Features

Tricyclic antidepressants have been best studied in individuals with MDD with melancholic features and with psychotic fea-tures. The combination of typical antipsychotic pharmacother-apy in association with tricyclic antidepressants has been rec-ommended. The side-effect profile of tricyclic antidepressants has included moderate to severe sedation, anticholinergic effects including constipation and cardiac effects which has made these medicines less popular in typical primary care or psychiatric practice. Nevertheless, the secondary amines which are metabo-lites of imipramine and amitriptyline, specifically desipramine and nortriptyline, have continued to be useful agents in more re-fractory depression.

There continues to be a role for the use of MAOIs in patients with MDD with atypical features. These agents particularly may be useful in intervention in depressive episodes with atypical features, characterized by prominent mood reactivity, reverse neurovegetative symptom patterns (i.e., overeating and over-sleeping) and marked interpersonal rejection sensitivity. MAOIs continue to have a significant role in treatment of comorbid panic disorder, social phobia and agoraphobia if individuals are not responsive to SSRIs. The ongoing prescription of phenelzine or tranylcypromine requires continued education of the patient regarding standard food interactions involving tyramine as well as specific drug–drug interactions involving sympathomimetic medications. These cautions regarding diet and drug interaction makes MAO inhibitors less attractive to primary care physicians and most psychiatrists. However, they continue to be effective treatments which may be useful in depression with atypical fea-tures as well as anergic bipolar depression.

Although therapeutic blood level monitoring in the treatment of MDD may have a role in future treatments, the only group of medicines where there has been reliable assessment of blood lev-els are the tricyclic antidepressants. Because tricyclic antidepres-sants have significant drug–drug interactions with certain SSRIs there continues to be a need for therapeutic blood monitoring particularly with nortriptyline and desipramine.

Increasingly, a trial of one class of antidepressants may be associ-ated with incomplete response leading to a question of augment-ing a treatment with another medicine versus switching from one medicine to another within the same class or to a different class altogether. Augmentation strategies with other medications, in-cluding adding lithium carbonate and other antidepressants, particularly those with a different mechanism of action, atypical antipsychotics, thyroid and stimulants, have been the focus of a number of reviews of treatment resistance. A staging system for treatment resistant depression (TRD) has been proposed and ranges from failure to respond to a single agent (Stage 1) to failure of multiple treatments and electroconvulsive therapy (Stage 5) as shown in Table 46.5. 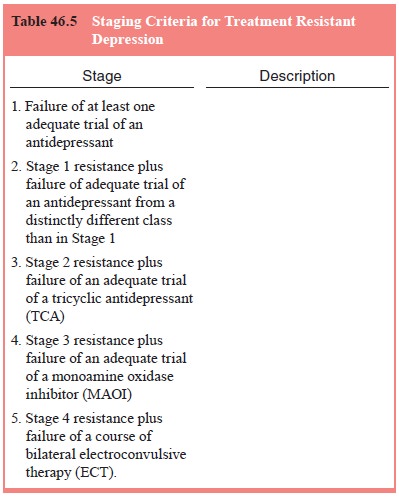 psychiatric relationship characterized by supportive interaction with the patient and family and ongoing education about the nature of the disorder and its treatment. Clinical management optimally involves careful monitoring of symptoms using stand-ardized instruments and careful attention to side effects of medi-cation in order to promote treatment adherence. Outpatient visits, which may be scheduled weekly at the outset of treatment, and subsequently biweekly encouragement and sustain collaborative treatment relationships. These office consultations allow the psy-chiatrist to make dosage adjustments as indicated, monitor side effects and measure clinical response to treatment.

For the majority of individuals with MDD, a course of 6 to 8 weeks of acute treatment with weekly outpatient visits is indicated. Subsequent office visits may be scheduled every 2 to 4 weeks during the continuation phase of treatment. Appropri-ate adjustments of dose are determined by the psychiatrist as indicated by best clinical judgments of medication effect. The dose of an SSRI may be adjusted every 3 days on the basis of telephone contact and follow-up visits may be scheduled every 7 to 10 days. Similarly, the adjustment of dosing of tricyclic anti-depressants and MAOIs must be attended to carefully in the first 2 to 3 weeks of treatment. Optimal dosing ranges of SSRIs, tri-cyclics and MAOIs are noted in Table 46.3. Because of the early anxiety, agitation and occasional insomnia associated with SS-RIs, somewhat lower doses may be initiated early in the course before achieving the typical standard therapeutic dose.

Incomplete response, which entails the failure to respond to acute treatment with an antidepressant medication at 6 to 8 weeks, requires reassessment of diagnosis and determination of adequacy of dosing. Ongoing substance abuse, associated general medical condition or concurrent psychiatric disorder may partially explain a lack of complete response. If substance dependence is present, a full substance-free interval (preferablyweeks or longer) with appropriate detoxification and rehabilita-tion may be indicated. If a reassessment discloses an associated psychiatric disorder, then more specific treatment of that associ-ated disorder, whether it be bipolar disorder or concurrent post traumatic disorder, is necessary. If the reassessment suggests an associated comorbid personality disorder, then appropriate and more specialized psychotherapy may be necessary in order to achieve a complete response to treatment. As indicated before, if the MDD has psychotic features, then antipsychotic pharma-cotherapy to adequate doses must be initiated prior to initiating a course of standard tricyclic antidepressants or a combined se-rotonin norepinephrine uptake inhibitor such as venlafaxine. If MDD is associated with severe personality disorder (e.g., bor-derline personality disorder), then adjunctive psychotherapy and low dose antipsychotic medications may be necessary. If the pa-tient has severe melancholic, delusional, or catatonic features, a course of electroconvulsive therapy may be necessary to achieve remission of symptoms.

There is also evidence that continuation of treatment be-yond 6 to 12 weeks may convert some partial responders to re-sponders if drug treatment is increased to full doses. This time allows for evaluation of the role of focused psychotherapy to ad-dress residual interpersonal disputes, loss or grief, or ongoing social deficits. The associated augmentation strategies to stand-ard treatments include lithium carbonate augmentation, tricyclic antidepressant augmentation of SSRIs, thyroid hormone aug-mentation and bupropion augmentation of SSRIs.

Light therapy investigators have continued to demonstrate ben-efit in individuals with seasonal MDD by providing greater than 2500 lux light therapy for 1 to 2 hours/day. Many of these patients experience recurrent winter depression in the context of a recur-rent MDD or bipolar II disorder. Bright light exposure has been associated with favorable response within 4 to 7 days. As with electroconvulsive therapy, light therapy is best prescribed by specialists who have experience in its use and can appropriately evaluate the indication for light therapy and monitor carefully the response to treatment.

Ongoing investigation of alternative brain stimulation techniques have been the subject of recent investigation. The use of a powerful magnet to provide transcranial magnetic stimula-tion has been the subject of several open trials. It is not yet deter-mined whether the repetitive transcranial magnetic stimulation demonstrates its effectiveness through reduction of inhibitory neurotransmission or other mechanisms.

In addition, open clinical trials of vagus nerve stimula-tion (VNS) which has been found to be effective in epilepsy has been the subject of attention in refractory MDD. Several sites of investigation have begun to reveal positive effects at 9 months using VNS implantation. This procedure requires the implan-tation of a stimulating device in the chest with the capacity to stimulate the vagus nerve at regular intervals through the course of the day.