Whereas a 4 to 5% current prevalence rate of MDD exists in community samples, symptoms of depression are found in 12 to 36% of patients with a general medical condition

According to DSM-IV-TR, when symptoms of clinically signifi-cant depressed mood accompany dementia of the Alzheimer’s Type and, in the clinician’s judgment, the depression is due to the direct physiological effects of the Alzheimer’s disease, mood dis-order due to Alzheimer’s disease is diagnosed. When dementia consistent with cerebrovascular disease leads to prominent cog-nitive deficits, focal neurological signs and symptoms, signifi-cant impairment in functioning as well as predominant depressed mood, vascular dementia with depressed mood is diagnosed. The distinction between depressive disorders and dementing disor-ders is often complicated because depression and dementia com-monly cooccur. Treatment of cooccurring depressive features may relieve symptoms and improve overall quality of life.

It is estimated that the prevalence of depression in treated pa-tients with diabetes is three times as frequent as in the general population. Further, there is no difference in the prevalence rate of depression in patients with insulin-dependent diabetes melli-tus (Type I) in comparison to patients with noninsulin-dependent mellitus (Type II). The symptomatic presentation of MDD in pa-tients with diabetes is similar to patients without diabetes. Con-sequently, full assessment of and treatment for MDD is recom-mended in patients who become depressed during the course of diabetes. The relatively high point prevalence rate may be due to higher detection rate in this treated population, having a chronic illness, as well as metabolic and endocrine factors.

When MDD is present, increased morbidity and mortality is reported in postmyocardial infarction patients as well as in pa-tients having coronary artery disease without myocardial in-farction (MI). Therefore, treatment of MDD in patients with coronary artery disease is indicated. Prevalence estimates of MDD in postmyocardial infarction range from 40 to 65%. Over a 15-month period, patients 55 years or older who had mood disorder evidenced a mortality rate four times higher than expected, and coronary heart disease or stroke accounted for 63% of the deaths. Depression may promote poor adherence to cardiac rehabilitation and worse outcome. During the first year following MI, depression is considered to be associated with a three- to fourfold increase in subsequent cardiovascular morbidity and mortality. Depression in patients with coronary artery disease is associated with more social problems, func-tional impairment and increased health care utilization. Recent studies of erectile dysfunction, cardiovascular disease and de-pression demonstrate that all three conditions share many of the same risk factors.

MDD occurs in 25% of patients with cancer at some time during the illness. MDD should be assessed and treated as an independ-ent disorder. The intense reaction in patients diagnosed with cancer may lead to dysphoria and sadness without evolving a full syndrome of MDD. The consulting psychiatrist must evalu-ate the patient’s response to chemotherapy, side effects of the treatment, and medication interactions in the overall assessment of the patient. Among patients with cancer, MDD is typically characterized by heightened distress, impaired functioning and decreased capacity to adhere to treatment. Treating comorbid MDD with psychotherapy or pharmacotherapy may improve the overall outcome in patients with cancer and mitigate complica-tions of MDD.

Depression Due to Medications

If MDD is judged to be a direct physiologic effect of a medica-tion, then substance induced mood disorder is diagnosed. Medi-cations reported to cause depression involve several drugs from the associated groups listed in Table 46.1.

Among antihypertensive treatment, beta-adrenergic blockers have been studied regarding the risk of depression. No significant differences are found between individuals treated with beta-blockers and those treated with other antihyperten-sives regarding the propensity to develop depressive symp-toms. Lethargy is the most common side effect reported. No significant depressive complications are reported with calcium channel blockers or angiotensin converting enzyme (ACE) inhibitors.

Hormonal treatments, such as corticosteroids and ana-bolic steroids, can elicit depression, mania, or psychosis. Oral contraceptives require monitoring regarding the possible pre-cipitation of depressive symptoms. Because patients with seizure disorders and Parkinson’s disease are at high risk for concomitant MDD, it is difficult to establish a link between anticonvulsant or antiParkinsonian treatment and the precipitation of depression. Nevertheless, patients require close monitoring and evaluation for evolution of depressive symptomatology 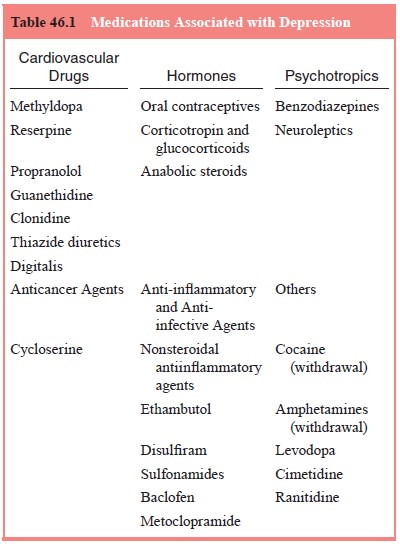