The precise nature of severity and duration of phases during the natural course of MDD has not been empirically demonstrated in longitudinal, prospective studies.

The precise nature of severity and duration of phases during the natural course of MDD has not been empirically demonstrated in longitudinal, prospective studies. Definitions of remission, re-covery, relapse and recurrence proposed by Frank and colleagues are illustrated in Table 46.2. 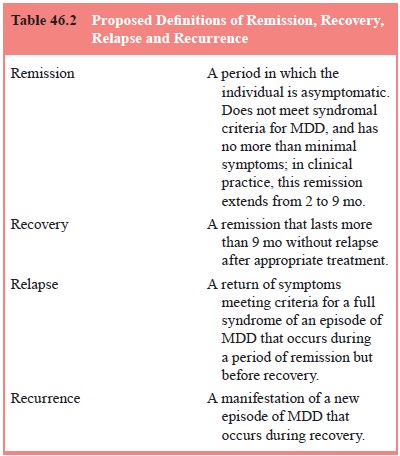 Poor outcome and likelihood of recurrent episodes is associated with comorbid conditions such as personality disorder, active substance or alcohol abuse, organicity, or medical illness. Recur-rence and outcome may be affected by the rapidity of clinical intervention. Inadequate treatment (e.g., insufficient dosing or duration of pharmacotherapy) contributes to poor outcome, in-cluding chronic MDD. Several authors have asserted that early treatment intervention in an episode of MDD is considered to be somewhat more effective than later intervention in an episode.

MDD must be viewed as a serious medical illness. Although de-pression is treatable, the prognosis for an individual diagnosed with MDD involves important implications regarding morbidity, social functioning and mortality Patients with MDD report health difficulties and actively use health services. Studies have indicated that as many as 23% of depressed patients report health difficulties severe enough to keep them bedridden. A community sample of patients with MDD demonstrated increased health care utilization in comparison to patients in the general medical set-ting (Regier et al., 1988). The Medical Outcomes Study (Wells et al., 1989) examined role functioning, social functioning and number of days in bed secondary to poor health, and compared the degree of impact of depression and other chronic medical conditions. Depression was associated with more impairment in occupational and interpersonal functioning, and more days in bed, in comparison to several common medical illnesses.

Patients with MDD were shown to be as functionally im-paired as patients with serious, chronic medical conditions as well (Katon et al., 1990). Patients with MDD evidence severely impaired occupational functioning, such as loss of work time. Further, long-term diminished activity has been shown to char-acterize depressed patients.

A significant relationship exists between MDD and mortality, characterized by suicide and accidents. Therefore, an accurate diagnosis of MDD, early appropriate intervention and specific assessment of suicidality is essential. Fifteen percent of patients with MDD who require hospitalization due to severe depression will die by committing suicide. Approximately 10% of patients with MDD who attempt suicide will eventually succeed in killing themselves. Roughly 50% of individuals who have successfully committed suicide carried a primary depressive diagnosis.

Patients with MDD who were admitted to nursing homes were found to have a 59% greater likelihood of death within the first year of admission in comparison with nondepressed admis-sions. The ECA study indicated that patients with MDD 55 years of age and older evidence a mortality rate over the next 15 months four times higher than nondepressed controls matched for age.

The occurrence of MDD in patients who previously have been hospitalized following MI is demonstrated as an independ-ent risk factor for mortality at 6 months. The consequences of MDD were at the very least commensurate with that of left ven-tricular dysfunction and history of past MI.