Dental caries, chronic periodontitis, and the sequelae of these two diseases constitute the majority of oral and dental infections and the cause of tooth loss.

Dental plaque is a soft, adherent dental deposit that forms as a result of bacterial colonization of the tooth surface. It is rather insoluble, as well as adherent, and thus resists removal by water spray or mouth rinsing. Only more vigorous means such as tooth brushing and flossing between the teeth remove it. It consists almost entirely of bacterial cells (1.7 x1011 cells/g wet weight).

Dental caries is the progressive destruction of the mineralized tissues of the tooth,primarily caused by the production of organic acids resulting from the glycolytic metabolic activity of plaque bacteria. The basic characteristic of the carious lesion is that it progresses inward from the tooth surface, either the enamel-coated crown or the cementum of the exposed root surface, involving the dentin and finally the pulp of the tooth (Fig 62–1). From there, infection can extend out into the periodontal tissues at the root apex or apices. 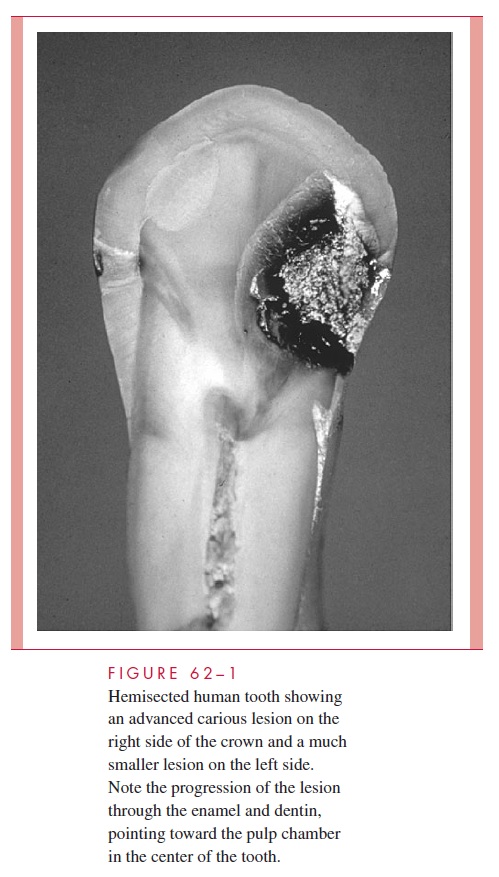 Chronic periodontitis, formerly referred to as adult periodontitis, is responsible for most tooth loss in people greater than 35 to 40 years of age. The term chronic indicates that the disease progresses slowly and results in the progressive destruction of the supporting tissues of the tooth (periodontal ligament and alveolar bone) from the margins of the gingiva toward the apices of the roots of the teeth. Although the accumulative effects of the disease make it appear chronic in nature, the disease may occur as a series of acute episodes separated by quiescent periods of indeterminate duration.