Dental caries is the single greatest cause of tooth loss in the child and young adult. Its onset can occur very soon after the eruption of the teeth.

Dental caries is the single greatest cause of tooth loss in the child and young adult. Its onset can occur very soon after the eruption of the teeth. The first carious lesions usually develop in pits or fissures on the chewing surfaces of the deciduous molars and result from the meta-bolic activity of the dental plaque that forms in these sites. Later in childhood, the incidence of carious lesions on smooth surfaces increases; these lesions are usually found between the teeth. The factors involved in the formation of a carious lesion are (1) a susceptible host or tooth, (2) the proper microflora on the tooth, and (3) a substrate from which the plaque bacteria can produce the organic acids that result in tooth demineralization.

The newly erupted tooth is most susceptible to the carious process. It gains protection against this disease during the first year or so by a process of posteruptive maturation be-lieved to be attributable to improvement in the quality of surface mineral on the tooth. Saliva provides protection against caries, and patients with dry mouth (xerostomia) suffer from high caries attack rates unless suitable measures are taken. In addition to the mechan-ical flushing and diluting action of saliva and its buffering capacity, the salivary glands also secrete several antibacterial products. Thus, saliva is known to contain lysozyme, a thiocyanate-dependent sialoperoxidase, and immunoglobulins, principally those of the se-cretory IgA class. The individual importance of these antibacterial factors is unknown, but they clearly play some role in determining the ecology of the oral microflora.

Proper levels of fluoride, either systemically or topically administered, result in dramatic decreases in the incidence of caries (50 to 60% reduction by water fluoridation, 35 to 40% reduction by topical application). In the case of systemic fluoridation, the pro-tective effect is thought to result from the incorporation of fluoride ions in place of hy-droxyl ions of the hydroxyapatite during tooth formation, producing a more perfect and acid-resistant mineral phase of tooth structure. Topical application of fluoride is believed to achieve the same result on the surface of the tooth by initial dissolution of some of the hydroxyapatite, followed by recrystallization of apatite that incorporates fluoride ions into its lattice structure. Another important mode of action, namely, the inhibition of deminer-alization, and the promotion of remineralization of incipient carious lesions by fluoride ions present in the oral fluid, has more recently been proposed as an important anticaries mechanism of fluoride, perhaps more important than the other proposed mechanisms. In any event, fluoridation represents the most effective means known for rendering the tooth more resistant to the carious process.

The microbial basis of dental caries is well established, and Koch’s postulates have been fulfilled, in general, for a number of microorganisms that cause the disease. This confirmation was achieved by using gnotobiotic (sterile) animals whose oral cavities could be colonized with a single organism. At times during the past half-century, a single microorganism was considered responsible for all caries; Lactobacillus acidophilus was regarded in this manner in the 1920s, and Streptococcus mutans enjoyed this reputation beginning in the 1960s. Currently, it is safe to say that any oral microorganism with a mechanism for colonizing the tooth surface or preexisting plaque and the ability to produce acid (acidogenic) and survive its action (aciduric) can be cariogenic. Organisms isolated from human carious lesions and shown to be cariogenic in gnotobiotic animals include some strains of S. mutans, Streptococcus salivarius, Streptococcus sanguis,Lactobacillus acidophilus, Lactobacillus casei, Actinomyces viscosus, and Actinomyces naeslundii.However, not all strains of these species are cariogenic in humans.

Studies in human subjects indicate that S. mutans is a major etiologic agent for smooth surface caries and possibly for pit, fissure, and root surface caries as well. When S. mutans strains were collected from different sources and compared, serologic and ge-netic heterogeneity led to designating some of these as separate species. Currently, those members of the mutans streptococci considered to be important cariogenic organisms in humans are S. mutans and S. sobrinus. Lactobacillus species may represent secondary in-vaders of the established caries lesion, but the mutans streptococci are thought to be the main initiators of this disease.

Cariogenic organisms must be provided with an appropriate substrate for glycolysis in order to cause tooth demineralization, and dietary monosaccharides and disaccha-rides such as glucose, fructose, sucrose, lactose, and maltose are readily used by most oral bacteria. These carbohydrates permeate the dental plaque, are absorbed by the bac-teria, and are metabolized so rapidly that organic acid products accumulate and cause the pH of the plaque to drop to levels sufficient to demineralize the tooth structure. Pro-duction of acid and the decreased pH are maintained until the substrate supply is ex-hausted. Obviously, foods with a high sugar content that adhere to the teeth and have long oral clearance times are more cariogenic than less retentive foodstuffs such as sugar-containing liquids. Once the substrate is exhausted, the plaque pH returns slowly to its more neutral pH resting level. Frequency of application of substrate is extremely important; the plaque pH may never reach a normal resting level with repeated snacking between meals.

Dietary sucrose is also used in the synthesis of extracellular polyglycans such as dex-trans and levans by some microorganisms that possess glucose transferase or fructose transferase enzymes on their cell surfaces. Synthesis of polyglycans is considered an ad-ditional virulence factor for two reasons:

1.   The polyglycan-producing microorganisms are usually aggregated in its presence, which is believed to aid in the colonization and/or accumulation of the organism on the tooth surface. S. mutans is a major cariogenic microorganism that acts in this way.

2.   Extracellular polyglycan production may increase cariogenicity by serving as an extra-cellular storage form of substrate. Certain microorganisms synthesize extracellular polyglycan when sucrose is available but then break it down into monosaccharide units to be used for glycolysis when dietary carbohydrate is exhausted. Thus, these microor-ganisms can prolong acidogenesis beyond the oral clearance time of the substrate.

Some oral bacteria also use dietary monosaccharides and disaccharides internally to form glycogen, which is stored intracellularly and used for glycolysis after the dietary substrate has been exhausted; thus, the period of acidogenesis is again prolonged and the cariogenicity of the microorganism increased. It is therefore clear that the ability to syn-thesize extracellular or intracellular storage polysaccharides, to colonize tooth surfaces, and to produce and survive in acid contribute to the microorganism’s cariogenicity.

The most common complications of dental caries are extension of the infection into the pulp chamber of the tooth (pulpitis), necrosis of the pulp, and extension of the infection through the root canals into the periapical area of the periodontal ligament. Periapical involvement may take the form of an acute inflammation (periapical abscess), a chronic nonsuppurating inflammation (periapical granuloma), or a chronic suppurating lesion that may drain into the mouth or onto the face via a sinus tract (Fig 62–4). A cyst may form within the chronic nonsuppurating lesion as a result of inflammatory stimulation of the epithelial rests  ormally found in the periodontal ligament. If the infectious agent is sufficiently virulent or host resistance is low, the infection may spread into the alveolar bone (osteomyelitis) or the fascial planes of the head and neck (cellulitis). Alternatively, it may ascend along the venous channels to cause septic thrombophlebitis. Because most carious lesions represent a mixed infection by the time cavities have developed, it is not surprising that most oral infections resulting from the extension of carious lesions are mixed and frequently include anaerobic organisms. 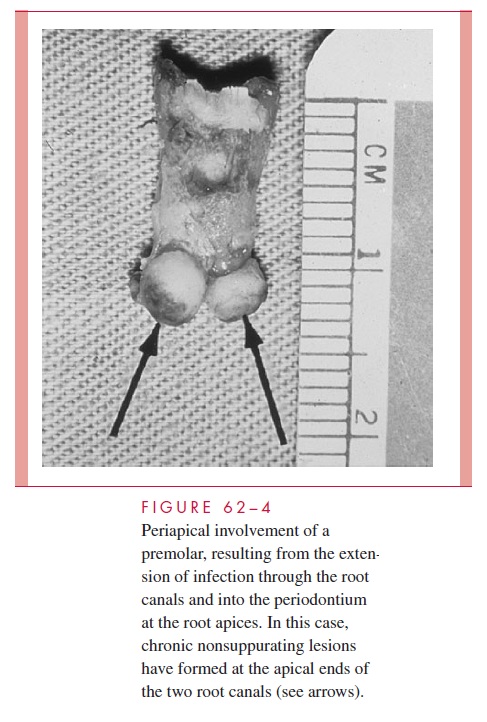