The formation of dental plaque is the result of a very specific colonization of tooth sur-faces by oral bacteria.

The formation of dental plaque is the result of a very specific colonization of tooth sur-faces by oral bacteria. The mineralized tooth surface is always coated with a thin organic film called the dental cuticle or pellicle. This coating results from adsorption and binding of specific salivary macromolecules, mainly proteins and glycoproteins, to the tooth sur-face. Because this cuticle or pellicle can form in a matter of minutes after the tooth sur-face is exposed to the oral fluid, bacteria never interact directly with the mineralized tooth surface. Instead, bacterial adherence to the tooth, which begins the colonization of the tooth surface, is mediated by bacterial receptors or adhesins that interact with the pellicle in some fashion, often a specific high affinity mechanism such as a lectin-like interaction. Subsequent to this initial colonization, accumulation of progeny as well as the attachment of other bacterial species occurs via a variety of coaggregation mechanisms.

A number of oral bacteria among the complex indigenous oral flora adhere readily to the cuticle-coated tooth above the gum line or free gingival margin. These are the initiators of plaque formation. Primary among them are Gram-positive cocci, such as the sanguis group of organisms (Streptococcus sanguis and related species) and short Gram-positive 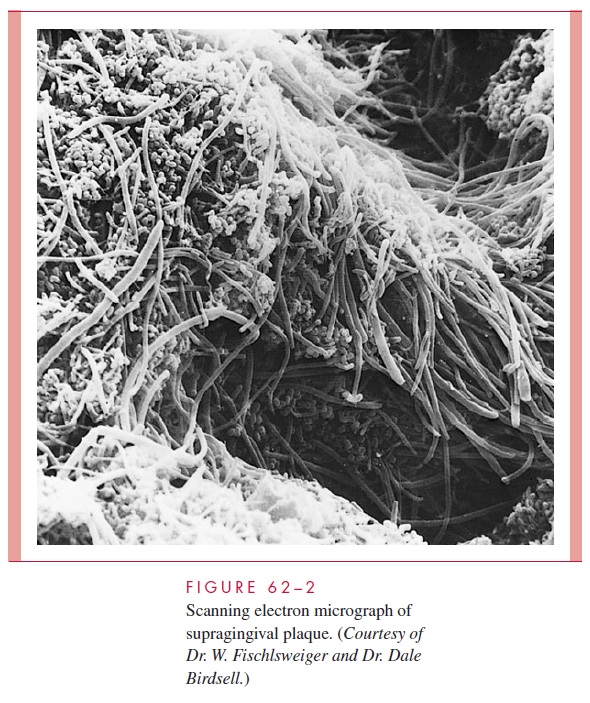 rods such as Actinomyces species. After 2 to 4 days, fusiform and filamentous organisms appear. Anaerobic vibrios, spirochetes, and a variety of Gram-negative, motile, anaerobic organisms appear at about 6 to 10 days. Thus, as the dental plaque increases in thickness, Gram-negative anaerobic organisms appear and multiply. In all, there are thought to be 300 to 400 bacterial species present in mature dental plaque. The extent and complexity of involved bacteria is shown in Figure 62 – 2. Dental plaque would coat the tooth surfaces uniformly but for its physical removal during chewing and other oral activities. Character-istically, plaque remains in the non – self-cleansing areas of the teeth such as pits and fis-sures, along the margins of the gingiva, and between the teeth (Fig 62 – 3). For this reason, the plaque-related diseases — caries, gingivitis, and periodontitis — occur in their greatest frequency and severity at these locations. 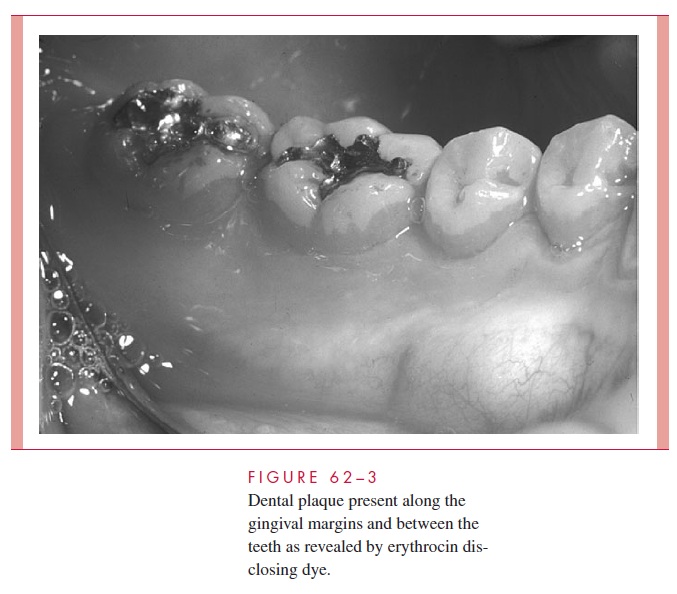 In addition to the supragingival plaque, the sul-cus around the tooth and periodontal pockets, which are pathologic extensions of the sulcus, are colonized by subgingival bacterial plaque of somewhat different composition. This plaque has a thin adherent layer attached to the tooth surface and a nonadherent bac-terial zone between that and the epithelial cells lining the sulcus, containing large numbers of Gram-negative, motile, anaerobic microorganisms. Supragingival plaque lacks such a distinct nonadherent zone. Recent investigations have shown that dental plaque is best de-scribed as a biofilm in that its biomass is permeated by fluid-filled channels that transport nutrients, waste products, and other materials, which can act as mediators of many types of interspecies interactions. These interactions are assumed to have a profound influence on the survival and metabolic characteristics of plaque microorganisms.

Because the causative organisms of both dental caries and chronic periodontitis are believed to be in the dental plaque, a prime method for maintaining oral health is regular home care practices for plaque removal. Dental plaque cannot be effectively removed from the teeth solely by chemical or enzymatic means, and the use of antibiotics for prophylactic inhibition of plaque formation cannot be clinically justified, although pa-tients undergoing long-term antibiotic treatment for other medical reasons demonstrate a lower incidence of caries and periodontal disease. Antiseptic substances that bind to tooth surfaces and inhibit plaque formation, such as the bis-biguanides, chlorhexidine and alexidine, have been shown to be effective in reducing plaque, caries, and gingival inflam-mation. The US Food and Drug Administration has approved a commercial preparation containing 0.12% chlorhexidine for use in controlling dental plaque and associated dis-ease. Toothpaste and mouthrinse additives such as phenolic compounds, essential oils, tri-closan, fluorides, herbal extracts, and quaternary ammonium compounds have been shown to have some plaque-reducing ability as well. The use of these substances must be accompanied by proper tooth brushing and flossing to ensure effective disease prevention.