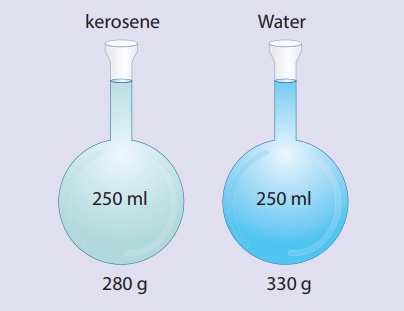 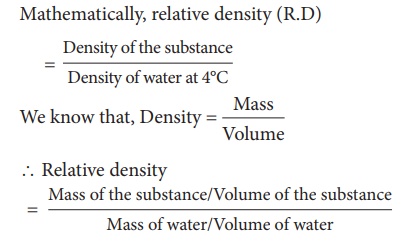 Relative density can be measured using Pycnometer (Fig. 1.15) also called density bottle. It consists of ground glass stopper with a fine hole through it. The function of the hole in a stopper is that, when the bottle is filled and the stopper is inserted, the excess liquid rises through the hole and runs down outside the bottle. By this way the bottle will always contain the same volume of whatever the liquid is filled in, provided the temperature remains constant. Thus the density of a given volume of a substance to the density of equal volume of referenced substance is called relative density or specific gravity of the given substance. If the referenced substance is water then the term specific gravity is used. 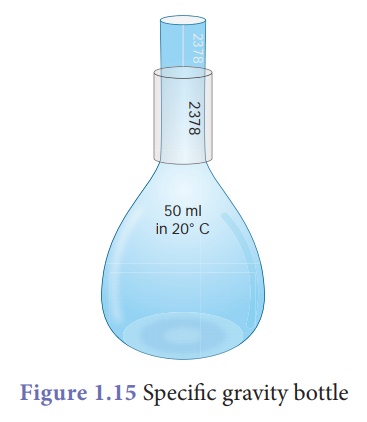 (b) The mystery material is denser than the water, so it sinks.

4. Application of principle of flotation 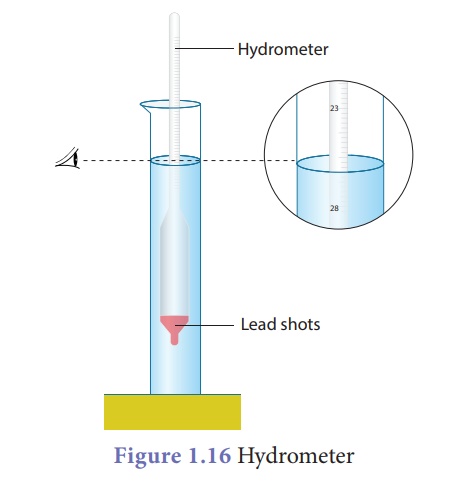 Hydrometer consists of a cylindrical stem having a spherical bulb at its lower end and a narrow tube at is upper end. The lower spherical bulb is partially filled with lead shots or mercury. This helps hydrometer to float or stand vertically in liquids. The narrow tube has markings so that relative density of a liquid can be read directly.

The liquid to be tested is poured into the glass jar. The hydrometer is gently lowered in to the liquid until it floats freely. The reading against the level of liquid touching the tube gives the relative density of the liquid.

One form of hydrometer is a lactometer, an instrument used to check the purity of milk. The lactometer works on the principle of gravity of milk.

The lactometer consists of a long graduated test tube with a cylindrical bulb with the graduation ranging from 15 at the top to 45 at the bottom. The test tube is filled with air. This air chamber causes the instrument to float. The spherical bulb is filled with mercury to cause the lactometer to sink up to the proper level and to float in an upright position in the milk.

Inside the lactometer there may be a thermometer extending from the bulb up into the upper part of the test tube where the scale is located. The correct lactometer reading is obtained only at the temperature of 60°C. A lactometer measures the cream content of milk.

More the cream, lower the lactometer floats in the milk. The average reading of normal milk is 32. The lactometers are used highly at milk processing units and at dairies.

Take two identical flasks and fill one flask with water to 250 cm3 mark and the other with kerosene to the same 250 cm3 mark. Measure them in a balance. The flask filled with water will be heavier than the one filled with kerosene. Why? The answer is in finding­ the mass per unit volume of ­kerosene and water in respective flasks.