We already saw that a body experiences an upward force due to the fluid surrounding, when it is partially or fully immersed in to it. We also saw that pressure is more at the bottom and less at the top of the liquid. This pressure difference causes a force on the object and pushes it upward. This force is called buoyant force and the phenomenon is called buoyancy (Fig.1.17). 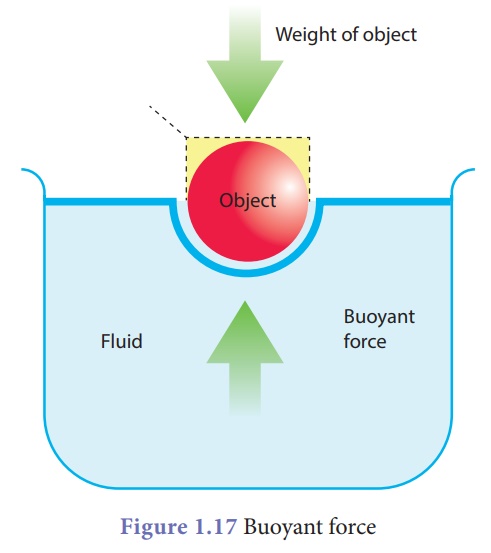 Cartesian diver is an experiment that demonstrates the principle of buoyancy. It is a pen cap with clay. The Cartesian diver contains just enough liquid that it barely floats in a bath of the liquid; its remaining volume is filled with air. When pressing the bath, the additional water enters the diver, thus increasing the average density of the diver, and thus it sinks. Six objects (A-F) are in a liquid, as shown below. None of them are moving. Arrange them in order of density, from lowest to highest.

The more of an object’s volume is above the water surface, the less dense it is. Object B must therefore be the least dense, followed by D, A, and F. Object E is next, because it is neutrally buoyant and equal in density to the liquid. Object C is negatively buoyant because it is denser than the fluid.

Therefore the order of density from lowest to highest is B,D,A,F, E,C.

For an object submerged in a fluid, there is a net force on the object, because the pressure at the top and bottom of it are different. We know that pressure, P = F/A

The buoyant force is, Fb = ρgV

First, we ensure that the units used for volume are the same.

The buoyant force acting on the golden crown is 14.7 N.