Cyber attacks are launched primarily for causing significant damage to a computer system or for stealing important information from an individual or from an organization.

Cyber attacks are launched primarily for causing significant damage to a computer system or for stealing important information from an individual or from an organization. Cyber security is a collection of various technologies, processes and measures that reduces the risk of cyber attacks and protects organizations and individuals from computer based threats.

Malware is a type of software designed through which the criminals gain illegal access to software and cause damage. Various types of cyber-attacks and their functions are given inTable 17.2. 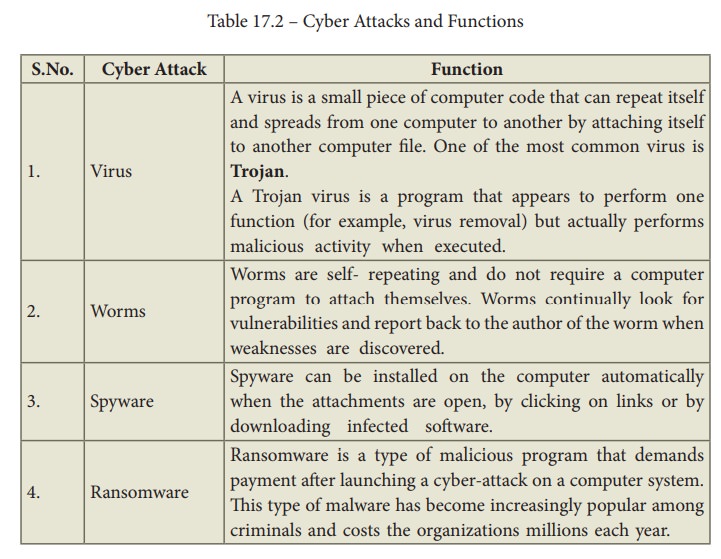 In recent years, most of the individuals and enterprises are facing problems due to the weaknesses inherent in security systems and compromised organizational infrastructures. Different types of Cyber Security Threats are categorized as below:

A misuse of an individual’s weakness, achieved by making them to click malicious links, or by physically accessing the computer through tricks. Phishing and pharming are examples of social engineering.

Phishing is a type of computer crime used to attack, steal user data, including login name, password and credit card numbers. It occurs when an attacker targets a victim into opening an e-mailor an instant text message. The attacker uses phishing to distribute malicious links or attachments that can perform a variety of functions, including the extraction of sensitive login credentials from victims. 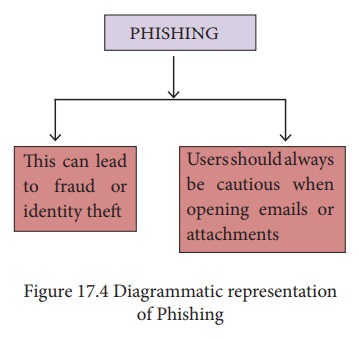 Pharming is a scamming practice in which malicious code is installed on a personal computer or server, misdirecting users to fraudulent web sites without their knowledge or permission. Pharming has been called "phishing without a trap”. It is another way hackers attempt to manipulate users on the Internet. It is a cyber-attack intended to redirect a website's traffic to a fake site. 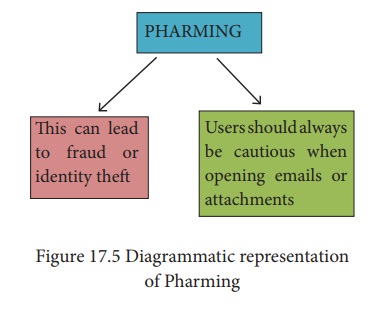 Man In The Middle (MITM)

Man-in-the-middle attack (MITM; also Janus attack) is an attack where the attacker secretly relays and possibly alters the communication between two parties who believe they are directly communicating with each other.

Example: Suppose Alice wishes to communicate with Bob. Meanwhile, Mallory wishes to intercept the conversation to overhear and optionally to deliver a false message to Bob. 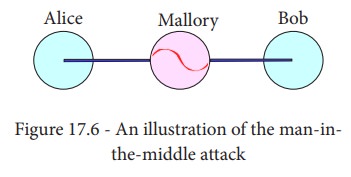 A cookie (also called HTTP cookie, web cookie, Internet cookie, browser cookie, or simply cookie) is a small piece of data sent from a website and stored on the user's computer memory (Hard drive) by the user's web browser while the user is browsing internet. Cookies were designed to be a reliable mechanism for websites to remember stateful information (such as items added in the shopping cart in an online store) or to record the user's browsing activity (including clicking particular buttons, logging in etc.). They can also be used to remember arbitrary pieces of information that the user previously entered into form fields such as names, addresses, passwords, and credit card numbers. From the security point of view, if cookie data is not encrypted, any anonymous user (hacker) can access the cookie information and misuse it.

Web sites typically use cookies for the following reasons:

• To collect demographic information about who has visited the Web site.

• Sites often use this information to track how often visitors come to the site and how long they remain on the site.

• It helps to personalize the user's experience on the Web site.

• Cookies can help store personal information about users so that when a usersubsequently returns to the site, a more personalized experience is provided.

If you ever returned to a site and have seen your name mysteriously appear on the screen, it is because on a previous visit, you gave your name to the site and it was stored in a cookie. A good example of this is the way some online shopping sites will make recommendations to users based on their previous purchases. It helps to monitor advertisements. Cookies do not act maliciously on computer system. They are merely text files that can be deleted at any time.

Cookies cannot be used to spread viruses and they cannot access your hard drive. However, any personal information that you provide to a Web site, including credit card information, will most likely be stored in a cookie unless the cookie feature is explicitly turned off in your browser. This is the way in which cookies threaten privacy.

A firewall is a computer network security based system that monitors and controls incoming and outgoing network traffic based on predefined security rules. A firewall commonly establishes a block between a trusted internal computer network and entrusted computer outside the network. They are generally categorized as network-based or host-based. Network based firewalls are positioned on the gateway computers of LANs [local area Network], WANs [Wide Area Network] and intranets. Host-based firewalls are positioned on the network node itself. The host-based firewall may be a service as a part of the operating system or an agent application such as endpoint security or protection. Each has advantages and disadvantages. However, each has a role in layered security. Firewalls also vary in type depending on where communication originates, where it is intercepted, and the state of communication being traced. Figure 17.7 shows the working of firewall server. 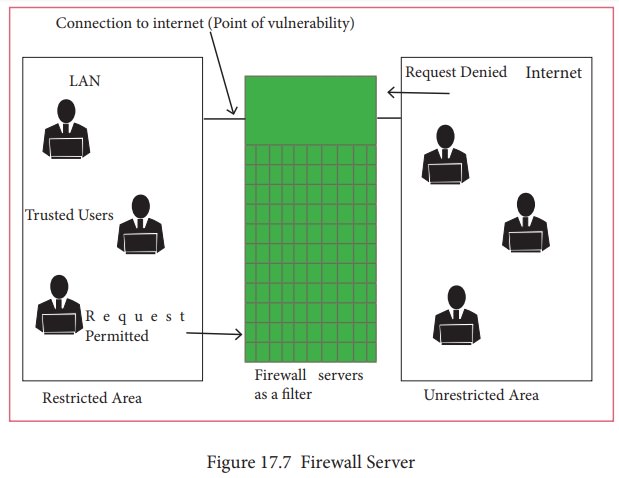 A proxy server acts as an intermediary between the endusersand a web server. A client connects to the proxy server, requesting some service, such as a file, connection, web page, or other resources available from a different server. The proxy server examines the request, checks authenticity and grants the request based on that. Proxy servers typically keep the frequently visited site addresses in its cache which leads to improved response time.

Figure 17.8 shows the working of a proxy server.

Encryption and decryption are processes that ensure confidentiality that only authorized persons can access the information.

Encryption is the process of translating the plain text data (plaintext) into random and mangled data (called cipher-text).

Decryption is the reverse process of converting the cipher-text back to plaintext. Encryption and decryption are done by cryptography. In cryptography a key is a piece of information (parameter) that determines the functional output of a cryptographic algorithm.

Encryption has been used by militaries and governments to facilitate secret communication. It is now commonly used in protecting information within many kinds of civilian systems. It is also used to protect data in communication system, for example data being transferred via networks (e.g. the Internet, ecommerce), mobile telephones, wireless microphones, wireless intercom systems, Bluetooth devices and bank automatic teller machines. There have been numerous reports of data in communication being intercepted in recent years. Data should also be encrypted when transmitted across networks in order to protect against the network traffic by unauthorized users.

There are two types of encryption schemes as listed below: 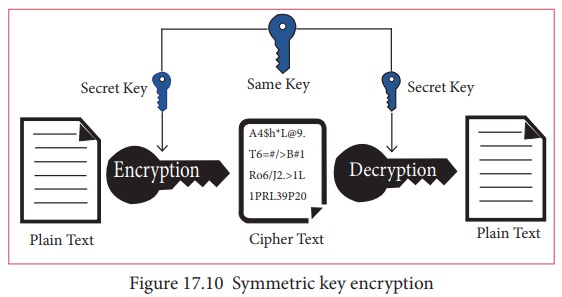 Public key encryption isalso called Asymmetric encryption. It uses the concept of a key value pair, a different key is used for the encryption and decryption process. One of the keys is typically known as the private key and the other is known as the public key.

The private key is kept secret by the owner and the public key is either shared amongst authorized recipients or made available to the public at large. 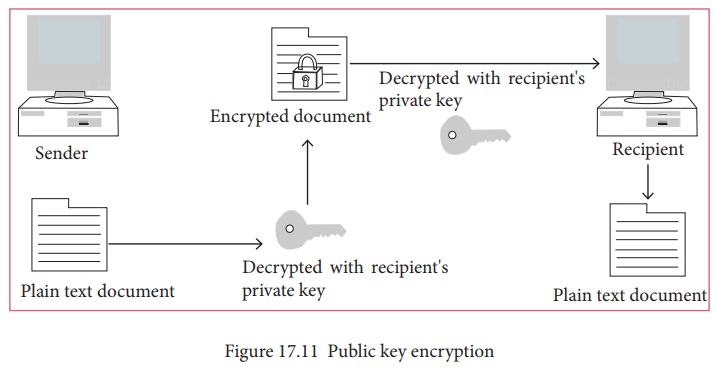 Digital signatures are based on asymmetric cryptography and can provide assurances of evidence to origin, identity and status of an electronic document, transaction or message, as well as acknowledging informed by the signer.

To create a digital signature, signing software (email) creates a one-way hash of the electronic data to be signed. The user's private key to encrypt the hash, returning a value that is unique to the hashed data. The encrypted hash, along with other information such as the hashing algorithm, forms the digital signature. Any change in the data, even to a single bit, results in a different hash value. This attribute enables others to validate the integrity of the data by using the signer's public key to decrypt the hash. If the decrypted hash matches a second computed hash of the same data, it proves that the data hasn't changed since it was signed. If the two hashes don't match, the data has either been tampered with in some way (indicating a failure of integrity) or the signature was created with a private key that doesn't correspond to the public key presented by the signer (indicating a failure of authentication). Figure 17.12 shows the function of a digital signature. 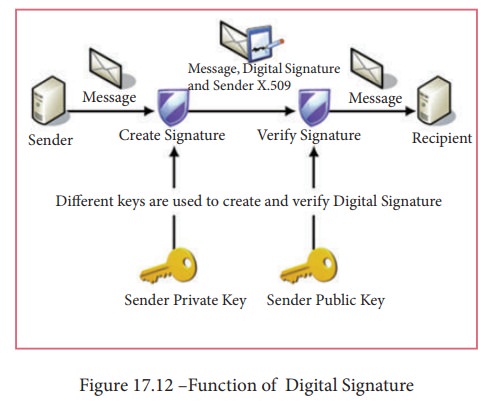