An Ethical issue is a problem or issue that requires a person or organization to choose between alternatives that must be evaluated as right (ethical) or wrong (unethical).

An Ethical issue is a problem or issue that requires a person or organization to choose between alternatives that must be evaluated as right (ethical) or wrong (unethical). These issues must be addressed and resolved to have a positive influence in society.

Some of the common ethical issues are listed below:

• Use of computers to commit fraud

• Sabotage in the form of viruses

Cybercrime is an intellectual, white-collar crime. Those who commit such crimes generally manipulate the computer system in an intelligent manner.

Examples of some Computer crimes and their functions are listed below in Table 17.1: 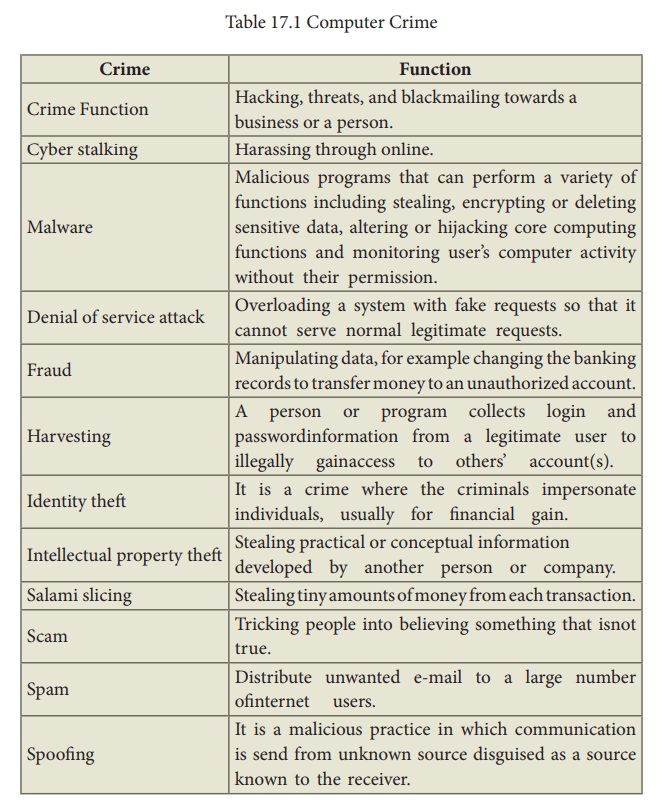 Software Piracy is about the copyright violation of software created originally by an individual or an institution. It includes stealing of codes / programs and other information illegally and creating duplicate copies by unauthorized means and utilizing this data either for one’s own benefit or for commercial profit. 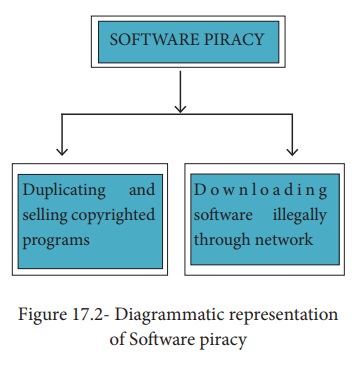 Most of the commercial software is licensed for use at a single computer site or for use by only one user at any time. When a user buys any software, he becomes a licensed user for that software. He is allowed to make copies of the program for backup purposes, but it is against the law to distribute duplicate copies to others. Such illegal copying and distribution of commercial software should not be practiced.

An entirely different approach to software piracy is called shareware, acknowledges the futility of trying to stop people from copying software and instead relies on people’s honesty. Shareware publishers encourage users to give copies of programs to friends and colleagues but ask everyone who uses that program regularly to pay a registration fee to the program’s author directly. Commercial programs that are made available to the public illegally are often called warez.

Hacking is intruding into a computer system to steal personal data without the owner’s permission or knowledge (liketo steal a password). It is also gaining unauthorized access to a computer system, and altering its contents. It may be done in pursuit of a criminal activity or it may be a hobby. Hacking may be harmless if the hacker is only enjoying the challenge of breaking systems’ defenses, but such ethical hacking should be practiced only as controlled experiments. Figure 17.3 shows a diagrammatic representation of Hacking. 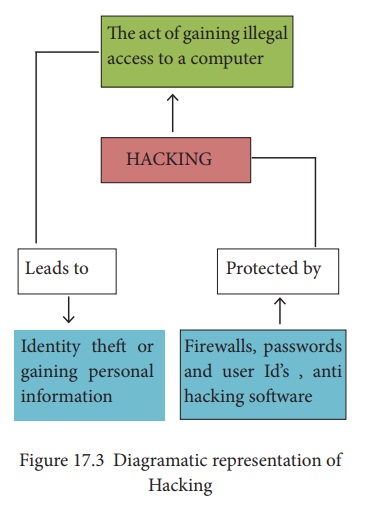 Cracking is where someone edits a program source so that the code can be exploited or modified. A cracker (also called a black hat or dark side hacker) is a malicious or criminal hacker. “Cracking” means trying to get into computer systems in order to steal, corrupt, or illegitimately view data.

A cracker is someone who breaks into someone else's computer system, often on a network, bypassing passwords or licenses in computer programs.

One more interesting fact about cracking is social engineering. It is a method of getting passwords and information using human weakness. These crackers trick people, not software. They can use just the phone for getting information, they can pretend being your friend and talk to you on Internet Relay Chat(IRC) or by Instant messenger. e-mail can also be a source for them. They may send official e-mail requesting some sensitive information. It may look like a legitimate e-mail from bank or other official institution.

The other method that uses social engineering crackers is password guessing. They find your personal information from some personal data/facts and try to guess a password.

Usually a cracker maintains knowledge of the vulnerabilities he or she finds and exploits them for personal advantage, not revealing them to either to the general public or to the manufacturer.