This type of foundations is commonly used for walls and masonry columns. These foundations are built after opening the trenches to required depth. Such footings are economical up to a maximum depth of 3 m.

Figure 2.2.1 shows a conventional spread footing for a wall and Fig. 2.2.2 shows it for a masonry column. 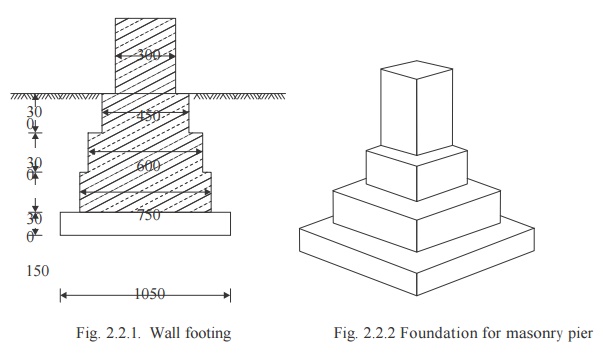 Before building these footing trenches are opened to required depth and the soil is rammed well. Then a plain concrete of mix 1 : 4 : 8 is provided. Its thickness varies from 150 to 200 mm. Over this bed, stone masonry footing is built. It is built in courses each course projecting 50 to 75 mm from the top course and height of each course being 150 to 200 mm. In case of wall footing the projections are only one direction while in case of columns, they are in both directions. The projection of bed concrete from the lowest course of foundation masonry is usually 150 mm.

There are mainly two types of R.C.C. footings:

2. Two Way Reinforced Footings: For columns two way reinforced footings are provided. The following types of the footings are common:

(i) Isolated Column Footings: If separate footings are provided for each column, it is called isolated column footing. Figure 2.2.2.1 shows a typical isolated column footing. The size of footing is based on the area required to distribute the load of the columns safely over the soil .These footings are provided over a 100 to 150 mm bed concrete. Required reinforcements and thickness of footing are

found by the design engineers. Thickness may be uniform or varying. 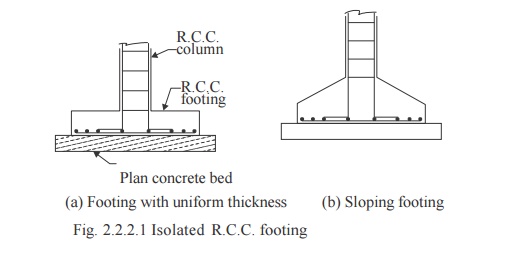 (ii) Combined Footings: Common footings may be provided for two columns. This type of footing is necessary when a column is very close to the boundary of the property and hence there is no scope to project footing much beyond the column face. Figure 2.2.2.2 shows a typical combined footing. The footing is to be designed for transferring loads from both columns safely to the soil. The two columns may or may not be connected by a strap beam.

(iv) Mat Footing/Raft Footing: If the load on the column is quite high (Multistorey columns) or when the SBC of soil is low, the sizes of isolated columns may work out to be to such an extent that they overlap each other. In such situation a common footing may be provided to several columns as shown in Fig. 2.2.2.4 Such footings are known as raft footings.

If the beams are provided in both directions over the footing slab for connecting columns, the raft foundations may be called as grid foundation also.

The added advantage of such footing is, settlement is uniform and hence unnecessary stresses are not produced. 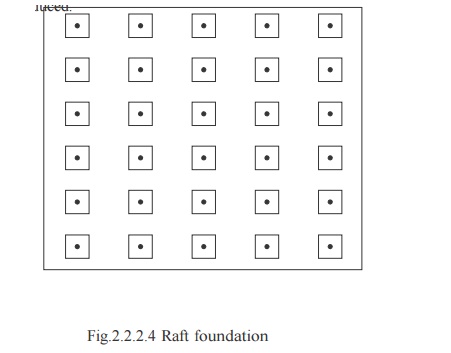 High rise buildings are built with steel columns encased in concrete. Such columns carry very heavy load and hence they need special foundations to spread the load to a larger area of soil. Grillage foundation is one such special foundation. It consists of one tier or more tiers of I-sections steel beams. Fig 2.2.2.5 shows a typical two tier grillage foundation. Top tier consists of less number but large size steel section while lower tier consists of larger number but smaller size steel sections. Column load is transferred to the top tier through a base plate. The grillage beams are unpainted and are encased in concrete with minimum cover of 100 mm beyond the edges of steel sections. A minimum clear space of 75 mm should be maintained between the flanges of adjacent grillage beams so that concreting can be made properly.To maintain spacing, pipe separators are used. 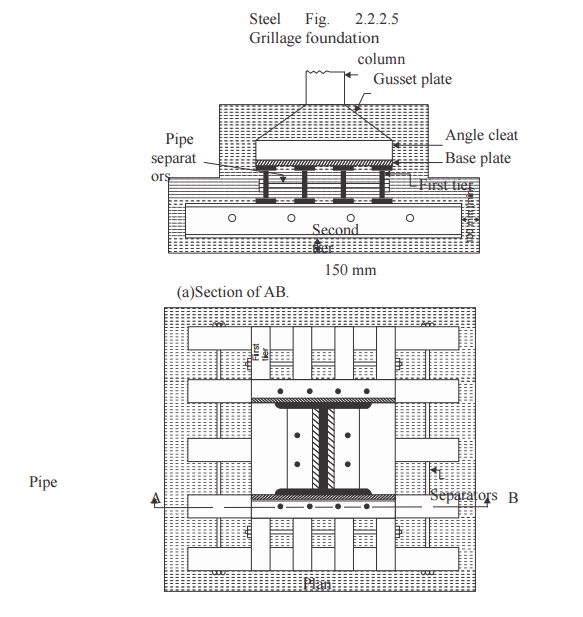