Beams are defined as horizontal load carrying member in a structure. Reinforced cement concrete, concrete, prestressed concrete and steel I sections are used as beams to support the slabs.

Beams are defined as horizontal load carrying member in a structure. Reinforced cement concrete, concrete, prestressed concrete and steel I sections are used as beams to support the slabs. 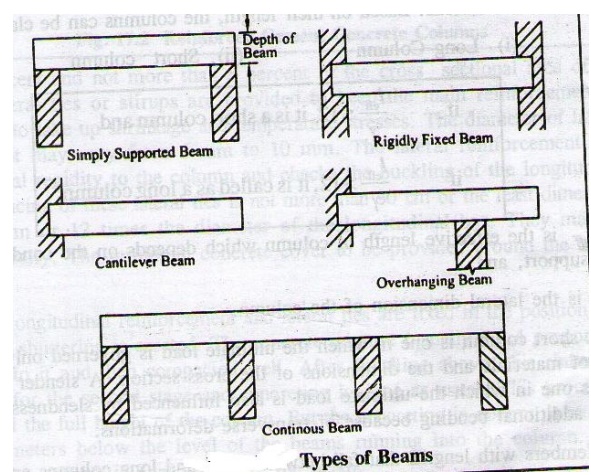 It the two ends of a beam is rigidly fixed in walls then it is called fixed beams. In such cases, the moment is induced at supports because it will not allow rotation.

If a beam is fixed in one end and the other end is free then it is called cantilever beam.

If a beam having its end portion extended beyond the support, it is called overhanging beam.

If a beam is supported on more than two supports, then it is known as continuous beam.

The vertical load carrying member of a structure is called column. They are constructed of timber, stone, reinforced cement concrete of steel section.

In the multi storyed buildings, the section of the column in upper stories may be reduced as they have to carry lesser loads. But the centre lines of various columns of different stories must coincide in a same vertical line.

The various cross sections of steel columns are shown in fig. Struts of one or two angles are used as compression member in roof trusses. Latticed columns made up of channels or angles connected by lattice bars are often used where light loads are to be supported on long columns. battened columns made up of channels or angles connected only batten plate are also used as column. Rolled H-columns which are available in depths ranging from 150 mm to 500 mm and are now commonly used in steel Skelton construction. 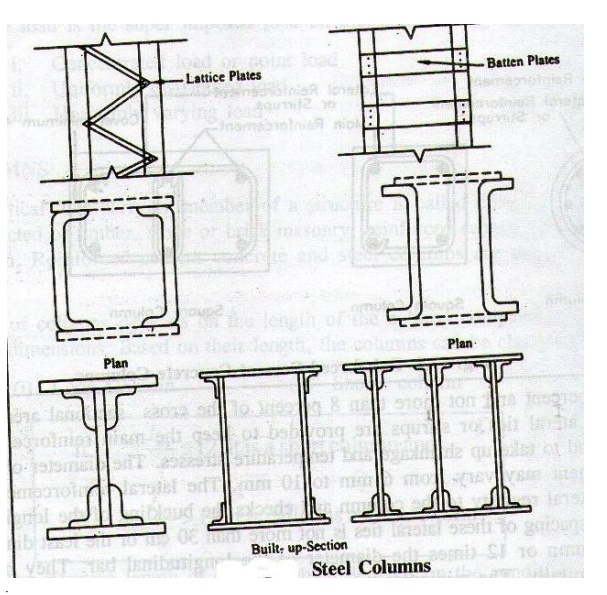