Contributions to carbon balance and atmosphere

Global carbon dioxide: Carbon cycles between gaseous forms like CO2 in the atmosphere and forms in which it is fixed, for instance in living organisms.

CONTRIBUTION TO CARBON BALANCE AND ATMOSPHERE

Carbon cycles between gaseous forms like CO2 in the atmosphere and forms in which it is fixed, for instance in living organisms. Higher plants have a major role in removing carbon dioxide from the atmosphere. Global atmospheric CO2 concentration was about 190 ppm at the end of the last ice age, but it has risen to 375 ppm today. Burning fossil fuels and widespread destruction of forests are responsible for this increase.

C3 plants are limited by CO2 levels, and growth rates in at least some species increase with increased CO2. In natural communities, growth is limited by other factors such as nutrient availability. C4 species are not likely to show enhanced yields with rising CO2, as they do not show photorespiration and have a much lower CO2 compensation point. Plants reduce atmospheric CO2 by fixing carbon; however this only decreases global atmospheric CO2 concentrations if the plant material is not degraded to release CO2 to the atmosphere.

Altered weather conditions will affect sensitive biomes and species at the limit of their distribution. Unless a species can adapt to a changed environment or migrate to less hostile areas, it will become extinct. This is particularly likely to be true of long-lived tree species.

Figure 1 illustrates the global carbon cycle. Carbon cycles between ‘fixed’ forms (organic carbon and carbonates) and the atmosphere (e.g. as CO2). Significant pools of carbon are present in the atmosphere, the oceans, soils and land plants. A very large amount also exists in carbonate rocks and in buried fossil fuels. Plants play a vital role in this cycle by fixing carbon from the atmosphere. At the end of the last ice age, about 18 000 years ago, the global atmospheric CO2 concentration was about 190 ppm (parts per million). Since then it has risen, reaching about 250 ppm in the 1700s to 375 ppm today; and it continues to rise (Fig. 2). This rise has been largely attributed to the burning of fossil fuels and the destruction of forests. Carbon is removed from the atmosphere when living organisms die and are preserved in deposits of coal, oil, peat and other sediments. It is also deposited as calcium carbonate minerals, including the exoskeletons of living organisms. As large amounts of the world’s carbon 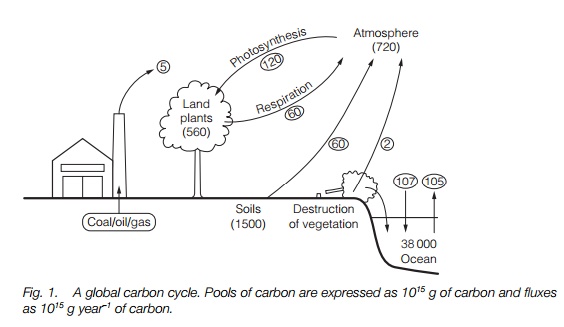 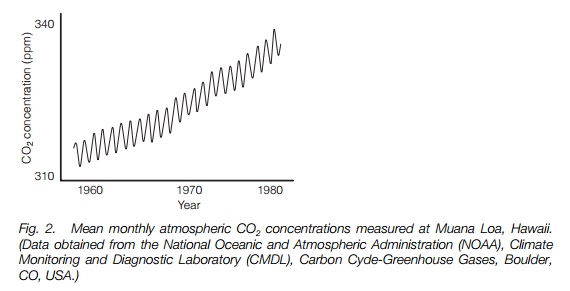 deposits are extracted from the ground and burned, large amounts of CO2 are released to the atmosphere. Destruction of forests reduces fixation of CO2and gives further CO2 release.

Rising global CO2 levels have a number of consequences, the chief of which is a net rise in global temperature. Solar radiation travelling through the earth’s atmosphere is partly reflected back into space by the earth’s surface and clouds; however, CO2 in the atmosphere absorbs some of the infra-red radiation which would escape. This makes the earth warmer; the degree of warming increasing with more CO2. While it is very hard to estimate precisely the degree of warming experienced as a result of rising CO2, and the presence of other greenhouse gases such as methane may be very significant, a rise of about 0.5ºC in global mean surface temperature has occurred over the last quarter century. Altered average temperatures have been accompanied by more extreme weather changes. These include earlier and later frosts and heavier rainfall in some areas and drought in others. With drought comes the possibility of fire and these have been widespread, particularly in the Asia/Pacific region. Rising sea level accompanied by melting ice-shelves in the Arctic and Antarctic are also consequences of global warming. World sea levels have risen by more than 10 cm in the last century and their continued rise will result in losses of coastal land and island communities.

At present, photosynthesis in C3 plants  is limited by CO2 levels and growth rates in at least some species increase if CO2 concentrations are increased. Growth rates may increase by 30–60% if CO2 concentrations are doubled, but this may only be temporary as growth and development are regulated in other ways . In natural communities, growth is likely to be limited by other factors such as nutrient availability. Yields of some glasshouse crops, such as tomato, have been increased by enriching the air around them with CO2. C4 species  are not likely to show enhanced yields with rising CO2, as they do not show photorespiration and have a much lower CO2 compensation point . Figure 3 illustrates net photosynthetic rates of a C3 plant (e.g. wheat) and C4 plant (e.g. maize) at different CO2 concentrations but otherwise optimal environments. While the C4 plant is more efficient at current global CO2 concentrations of around 360 ppm, this efficiency advantage will diminish and eventually C3 species will exceed C4 in efficiency if CO2 concentrations continue to rise. While in the short term, plants reduce atmospheric CO2 by fixing carbon, in the long term this only decreases global atmospheric CO2 concentrations if the plant material is not burnt or rotted, processes which release CO2 to the atmosphere (Fig. 1).

Overall, the impact of changing climate is likely to be greater than direct effects of CO2 concentration. While crop yields may increase in optimal environments, losses due to drought, flooding, sea level increases and disease will also increase. Plant communities will be changed as the competitive abilities of some species increase while others decline. Biomes likely to be sensitive to climate change include tundra (loss of permafrost); savannah and deciduous tropical forests (drought and fire) and deserts (rising temperatures). Other biomes, like tropical rain forests, are at risk from both human activity and drought. If a species is to survive, it must either adapt to its new surroundings or migrate through seed dispersal at a rate equal to that of climate change. For many longlived species this may not be possible and they may become extinct. 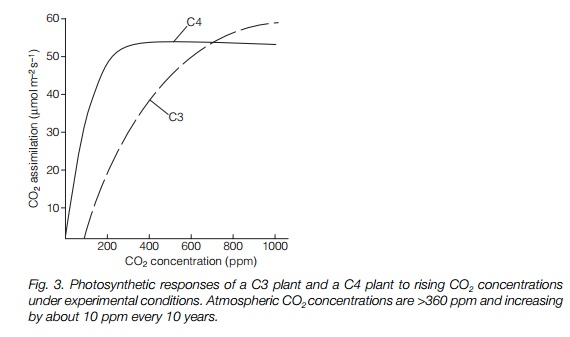