Ecology of flowering and pollination

Cross-pollinating hermaphrodite flowers must disseminate pollen and receive pollen from other flowers, these two functions involving different adaptations. The functions are separated in unisexual flowers.

ECOLOGY OF FLOWERING AND POLLINATION

The dual function of flowers

Cross-pollinating hermaphrodite flowers must disseminate pollen and receive pollen from other flowers, these two functions involving different adaptations. The functions are separated in unisexual flowers.

There is great variation in size and resource input into fruits and seeds by different plants. In some the resources of the parent plant limit seed or fruit set whereas in others the amount of pollination is limited. Many plants are limited by a combination of factors.

The dissemination of pollen

Wind-pollinated plants produce large quantities of pollen. Pollinating animals have different abilities to carry pollen with some more effective than others. Some plants have precise adaptations for particular pollinators. Pollen is deposited in decreasing quantity on the stigmas of up to the next thirty flowers visited.

Once pollen has reached a stigma there may be competition between pollen grains with some pollen tubes growing faster than others and potentially complex interaction with the styles. There may be selective abortion, particularly of selfed seeds.

Self and cross fertilization

Hermaphrodite flowers always have the potential for self-pollination and some plants are habitually self-fertilized. Advantages of self-fertilization are assured seed set, less resources needed for flowers and, after some generations with high mortality, identical seedlings with no new unfavorable combinations. Disadvantages are lack of variation allowing no adaptation to changing environments or pathogen attack and inbreeding depression. Inbreeding depression from self-fertilization is manifest in nearly all plants studied at some stage in the life cycle.

The dual function of flowers

Most flowers are hermaphrodite and perform two functions: disseminating pollen to other flowers, and receiving pollen to fertilize their own ovules. These functions involve slightly different adaptations. Here we consider a crosspollinating hermaphrodite plant; self-fertilizing plants are considered later and unisexual flowers  have separated the functions. There is a selective advantage for a flower to disperse its pollen as widely as possible to give it the maximum chance of siring seeds. In its capacity as a female parent the flower must receive enough pollen for maximal fertilization, but the plant must also provide enough energy and nutrients for the formation of seeds and fruits.

If nectar is the food reward for insect visitors this must be produced in sufficient quantities and of suitable concentration to attract insect pollinators, and one plant species may have to compete with coexisting species for the attention of visiting insects. More insect visits will generally lead to greater pollen dispersal but not necessarily greater seed set (see below).

The success of a plant as a female parent is easier to measure than its success as a pollen donor, since the plant forms its seeds on the plant. Plants differ greatly in the size and number of seeds and fruits produced and how many pollinations they require for maximal seed formation. Plants with many seeds per fruit may require few insect visits for full seed set if they are effective pollinators. The most extreme example is the orchids which produce pollen in sticky pollinia  and have thousands of microscopic seeds per fruit. They require just one successful insect visit per fruit so need attract much smaller numbers of pollinators than other plants. In contrast, members of several families, such as the daisy family and grasses, have one-seeded fruits, so each flower or floret must be pollinated separately. The amount of resources required from the parent plant is highly variable. Small fruited species such as grasses and orchids require few resources compared with those with large fruits such as coconuts (here mainly the seed) or water melons that set only a few fruits, each with a large amount of resources. On some plants with large fruits, such as many fleshy-fruited trees, only a small proportion of flowers can mature into fruits because of shortage of space.

In most flowers, seed set is limited by a combination of the amount of pollination and resources available for the developing seeds. In large-fruited plants, the resources from the plant limit fruit set and it is well known that many plants have a poor fruiting year after a good one, suggesting that there are insufficient resources for two consecutive years of high yield. Pollination may also limit fruit set, and in many studies in which the amount of pollination has been increased experimentally, more fruit has been set. This has often led to poorer growth or less fruit set the following year even in quite small-fruited plants, so clearly these two factors interact.

In dioecious plants  female flowers are frequently produced in smaller numbers than male flowers and there is also a smaller floral display suggesting that limitation of resources is important.

The dissemination of pollen

For pollen to spread to its maximum, many pollinator visits or effective spread of the pollen by wind is required. Few resources are needed for the pollen grains compared with fruit and seed set, and attraction of numerous insects to a flower will mainly enhance pollen dissemination. This suggests that, in many animal-pollinated species, much of the floral display is in relation to a flower’s male function. In wind-pollinated flowers, wide dissemination of pollen is assured by the plants producing an enormous quantity on fine days, as hayfever sufferers know only too well.

In animal-pollinated flowers the quantity and nature of the pollen depends on the animal. The furry bodies of many bees, moths and bats, as well as the feathers of birds can carry much more pollen than the smooth bodies of flies, some bees or the thin proboscis of a butterfly. They are likely to be more efficient as pollinators as a result, but their efficiency will also depend on their behavior. For instance, bees forage systematically, visiting adjacent flowers, often on the same plant and sometimes crawling, with occasional long flights.

They frequently groom themselves to remove the pollen on their bodies. Butterflies take mainly longer flights between flower visits so potentially take pollen further, and vertebrates are active fliers but require more nectar resources. Different species within each pollinator group behave differently with, e.g. some birds and some bees being territorial and some pollinators making a hole in the flower by the nectar, potentially avoiding the anthers. Different flowers are adapted to particular pollinators in the way their flowers are presented and the quantity and position of the pollen and nectar.

Once pollen has been picked up from a flower it may be deposited on many subsequent flowers in diminishing quantity, depending on the pollinator, with pollen being recorded travelling to 30 or more flowers visited (Fig. 1). In a selfincompatible plant the first flowers visited may be on the same plant or an adjacent sibling or offspring which will be incompatible with it, so pollen flow further than that may be essential for effective fertilization. 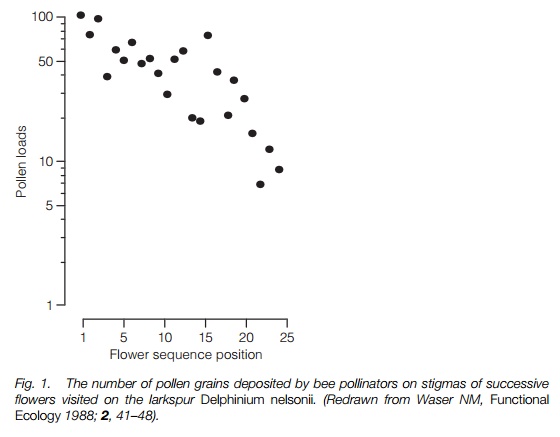 Once pollen has reached a compatible stigma it may be in competition with other pollen grains for fertilization. Pollen grains vary in their effectiveness in growing pollen tubes through genetic differences or because of where they land on the stigma and through interaction with other pollen tubes growing down the style. There may be different interactions between certain pollen grains and the stylar tissue affecting which pollen fertilizes the ovules. Vigorous pollen tube growth may lead to vigorous seedlings. Once the ovule is fertilized, if resources are limiting seed set, there may be selective abortion of the ovules. Some plants abort self-fertilized seeds selectively and may abort weaker crossfertilized seeds, though evidence of this is limited.

Self and cross fertilization

Flowers originally evolved for cross-pollination, but there is always the potential for self-pollination in a hermaphrodite flower and some species can produce full seed set from self-fertilization . They do not require any of the adaptations for pollen dissemination or receipt and many have small flowers with a limited amount of pollen. A much larger number of plants are selfcompatible and can self-fertilize, although they normally cross-fertilize. In these, self-fertilization frequently occurs only if cross-fertilization has failed, often with the pollen tubes of a plant’s own grains growing slower than those from another plant, or the pollen only reaching receptive stigmas as the flower ages.

The advantages of self-fertilization are that no external pollinating agent is needed so flowers can be small, providing no attractive parts and producing only enough pollen to fertilize their own ovules. Seed set is assured, and with fewer resources being used in flowers, it may be able to flower at an earlier developmental stage . This has particular advantages in colonizing situations and in ephemeral habitats.

Constant selfing will mean that the plant loses much of its genetic variation and, after a few generations, will be homozygous at almost all its genes, i.e. each gene copy will be identical. This can lead to deleterious genes being manifest and much mortality in the early generations, but once any deleterious genes have disappeared the plants will be all identical. This means that only proven successful plants will be produced and no seeds are ‘wasted’ on poor gene combinations. Many habitual selfers are polyploid so have several copies of each gene anyway, avoiding some of the problems of homozygosity.

The disadvantages of self-fertilization are the lack of new gene combinations leading to much reduced variation, dependent only on new mutations. This means that they may not be able to adapt to a changing environment, particularly important in developing resistance to herbivores or pathogens or in colonizing new sites. It also means that they never have the advantages of hybrid vigor which probably arise from a plant having two different forms of certain genes in each cell .

In plants that may cross or self-fertilize there is nearly always a disadvantage to selfing. This may be manifest in lower seed set, smaller or less resistant seeds, difficulties in germination, ability of the seedling to establish, vigor and survival of the offspring or their ability to reproduce or any combination of these features. This is known as inbreeding depression. Even in most habitual selffertilizing plants studied, experimental cross-pollination has led to more vigorous plants than selfing and almost all plants do occasionally cross-fertilize.