As previously noted, benzocaine’s pronounced lipophilicity has relegated its application to topical anesthesia.

Approved for use in the USA as a dental anesthetic in April 2000, articaine is unique among the amino-amide anesthetics in having a thiophene, rather than a benzene ring, as well as an additional ester group that is subject to metabolism by plasma esterases (Table 26–1). The modification of the ring serves to enhance lipophilicity, and thus improve tissue penetration, while inclusion of the ester leads to a shorter plasma half-life (approx-imately 20 minutes) potentially imparting a better therapeutic index with respect to systemic toxicity. These characteristics have led to widespread popularity in dental anesthesia, where it is generally considered to be more effective, and possibly safer, than lidocaine, the prior standard. Balanced against these posi-tive attributes are concerns that development of persistent par-esthesias, while rare, may be three times more common with articaine. However, prilocaine has been associated with an even higher relative incidence (twice that of articaine). Importantly, these are the only two dental anesthetics that are formulated as 4% solutions; the others are all marketed at lower concentrations (eg, the maximum concentration of lidocaine used for dental anesthesia is 2%), and it is well established that anesthetic neurotoxicity is, to some extent, concentration-dependent. Thus, it is quite possible that enhanced risk derives from the formulation rather than from an intrinsic property of the anes-thetic. In a recent survey of US and Canadian Dental Schools, over half of respondents indicated that 4% articaine is no longer used for mandibular nerve block. 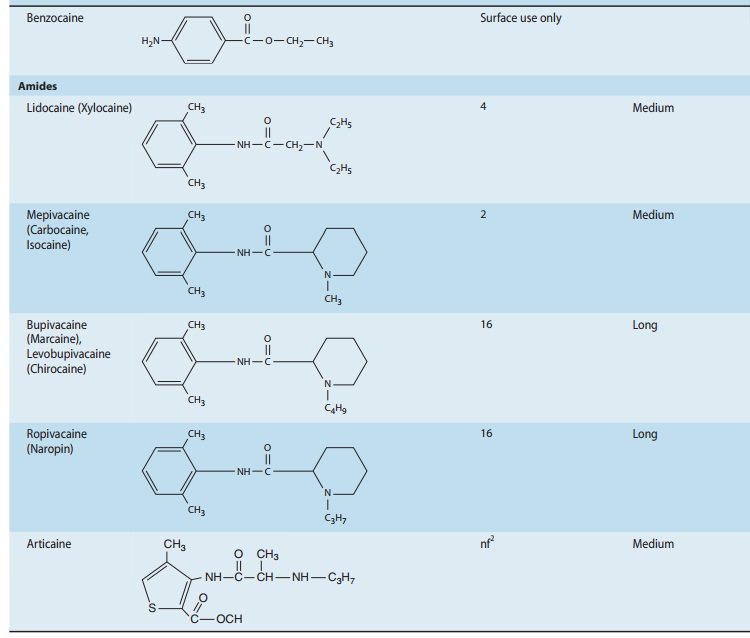 As previously noted, benzocaine’s pronounced lipophilicity has relegated its application to topical anesthesia. However, despite over a century of use for this purpose, its popularity has recently diminished owing to increasing concerns regarding its potential to induce methemoglobinemia. Elevated levels can be due to inborn errors, or can occur with exposure to an oxidizing agent, and such is the case with significant exposure to benzocaine (or nitrites). Because methemoglobin does not transport oxygen, elevated levels pose serious risk, with severity obviously paralleling blood levels.

Based on concerns for cardiotoxicity, bupivacaine is often avoided for techniques that demand high volumes of concentrated anes-thetic, such as epidural or peripheral nerve blocks performed for surgical anesthesia. In contrast, relatively low concentrations (≤ 0.25%) are frequently used to achieve prolonged peripheral anesthesia and analgesia for postoperative pain control, and the drug enjoys similar popularity where anesthetic infiltration is used to control pain from a surgical incision. It is often the agent of choice for epidural infusions used for postoperative pain con-trol and for labor analgesia. Finally, it has a comparatively unblemished record as a spinal anesthetic, with a relatively favor-able therapeutic index with respect to neurotoxicity, and little, if any, risk of TNS. However, spinal bupivacaine is not well suited for outpatient or ambulatory surgery, because its relatively long duration of action can delay recovery, resulting in a longer stay prior to discharge to home.

The introduction of chloroprocaine into clinical practice in 1951 represented a reversion to the earlier amino-ester tem-plate. Chloroprocaine gained widespread use as an epidural agent in obstetric anesthesia, where its rapid hydrolysis served to minimize risk of systemic toxicity or fetal exposure. Subsequent reports of neurologic injury associated with appar-ent intrathecal misplacement of large doses intended for the epidural space led to its near abandonment. However, the fre-quent occurrence of TNS when lidocaine is administered as a spinal anesthetic has created an anesthetic void that chloropro-caine appears well suited to fill. Its onset and duration of action are even shorter than those of lidocaine, while presenting little, if any, risk of TNS. Although chloroprocaine was never exoner-ated with respect to the early neurologic injuries associated with epidural anesthesia, it is now well appreciated that high doses of any local anesthetic, which are not required to achieve spinal anesthesia, are capable of inducing neurotoxic injury. In addition to chloroprocaine’s emerging use as a spinal anes-thetic, the drug finds some current use as an epidural anes-thetic, particularly in circumstances where there is an indwelling catheter and the need for quick attainment of surgical anesthe-sia, such as cesarean section in a laboring parturient with a compromised fetus.

Current clinical use of cocaine is largely restricted to topical anes-thesia for ear, nose, and throat procedures, where its intense vaso-constriction can serve to reduce bleeding. Even here, use has diminished in favor of other anesthetics combined with vasocon-strictors because of concerns about systemic toxicity, as well as the inconvenience of dispensing and handling this controlled substance.

Introduced along with bupivacaine, etidocaine has had limited application due to its poor block characteristics. It has a tendency to produce an inverse differential block (ie, compared with other anesthetics such as bupivacaine, it produces excessive motor rela-tive to sensory block), which is rarely a favorable attribute.

As previously discussed, this S(–) enantiomer of bupivacaine is somewhat less cardiotoxic than the racemic mixture. It is also less potent, and tends to have a longer duration of action, though the magnitude of these effects is too small to have any substantial clinical significance. Interestingly, recent work with lipid resuscita-tion suggests a potential advantage of levobupivacaine over ropi-vacaine, as the former is more effectively sequestered into a so-called lipid sink, implying greater ability to reverse toxic effects should they occur.

Aside from the issue of a high incidence of TNS with spinal administration, lidocaine has had an excellent record as an inter-mediate duration anesthetic, and remains the reference standard against which most anesthetics are compared.

Although structurally similar to bupivacaine and ropivacaine (Table 26–1), mepivacaine displays clinical properties that are comparable to lidocaine. However, it differs from lidocaine with respect to vasoactiv-ity, as it has a tendency toward vasoconstriction rather than vasodila-tion. This characteristic likely accounts for its slightly longer duration of action, which has made it a popular choice for major peripheral blocks. Lidocaine has retained its dominance over mepivacaine for epidural anesthesia, where the routine placement of a catheter negates the importance of a longer duration. More importantly, mepivacaine is slowly metabolized by the fetus, making it a poor choice for epidu-ral anesthesia in the parturient. When used for spinal anesthesia, mepivacaine has a slightly lower incidence of TNS than lidocaine.

Prilocaine has the highest clearance of the amino-amide anes-thetics, imparting reduced risk of systemic toxicity. Unfortunately, this is somewhat offset by its propensity to induce methemoglo-binemia, which results from accumulation of one its metabolites, ortho-toluidine, an oxidizing agent. As a spinal anesthetic, prilo-caine’s duration of action is slightly longer than that of lidocaine, and the limited data suggest it carries a low risk of TNS. It is gaining increasing use for spinal anesthesia in Europe, where it has been marketed specifically for this purpose. No approved formulation exists in the USA, nor is there any formulation that would be appropriate to use for spinal anesthesia as an off-label indication.

Ropivacaine is an S(–) enantiomer in a homologous series that includes bupivacaine and mepivacaine, distinguished by its chirality, and the propyl group off the piperidine ring (Table 26–1). Its per-ceived reduced cardiotoxicity has led to widespread use for high-volume peripheral blocks. It is also a popular choice for epidural infusions for control of labor and postoperative pain. Although there is some evidence to suggest that ropivacaine might produce a more favorable differential block than bupivacaine, the lack of equivalent clinical potency adds complexity to such comparisons.

The term eutectic is applied to mixtures in which the combina-tion of elements has a lower melting temperature than its component elements. Lidocaine and prilocaine can combine to form such a mixture, which is marketed as EMLA (Eutectic Mixture of Local Anesthetics). This formulation, containing2.5% of lidocaine and 2.5% prilocaine, permits anesthetic pen-etration of the keratinized layer of skin, producing localized numbness. It is commonly used in pediatrics to anesthetize the skin prior to venipuncture for intravenous catheter placement.

The provision of prolonged analgesia or anesthesia, as in the case of postoperative pain management, has traditionally been accomplished by placement of a catheter to permit continuous administration of anesthetic. More recently, efforts have focused on drug delivery systems that can slowly release anes-thetic, thereby providing extended duration without the draw-backs of a catheter. Sustained-release delivery has the potential added advantage of reducing risk of systemic toxicity. Preliminary work encapsulating local anesthetic into micro-spheres, liposomes, and other microparticles has established proof of concept, although significant developmental prob-lems, as well as questions regarding potential tissue toxicity, remain to be resolved.

It has been clearly demonstrated that anesthetic neurotoxicity does not result from blockade of the voltage-gated sodium channel. Thus, effect and tissue toxicity are not mediated by a common mechanism, establishing the possibility of developing compounds with considerably better therapeutic indexes.As previously discussed, the identification and subclassifica-tion of families of neuronal sodium channels has spurred research aimed at development of more selective sodium chan-nel blockers. The variable neuronal distribution of these isoforms and the unique role that some play in pain signaling suggests that selective blockade of these channels is feasible, and may greatly improve the therapeutic index of sodium channel modulators.