Disease can be defined as a disorder or malfunction of the mind or body.

Disease can be defined as a disorder or malfunction of the mind or body. It involves morphological, physiological and psychological disturbances which may be due to environmental factors or pathogens or genetic anomalies or life style changes. Diseases can be broadly grouped into infectious and non infectious types.

Non-infectious diseases are not transmitted from an infected person to a healthy person. In origin they may be genetic (cystic fibrosis), nutritional (vitamin deficiency diseases) and degenerative (arthritis, heart attack, stroke). Among non - infectious diseases, cancer is one of the major causes of death. 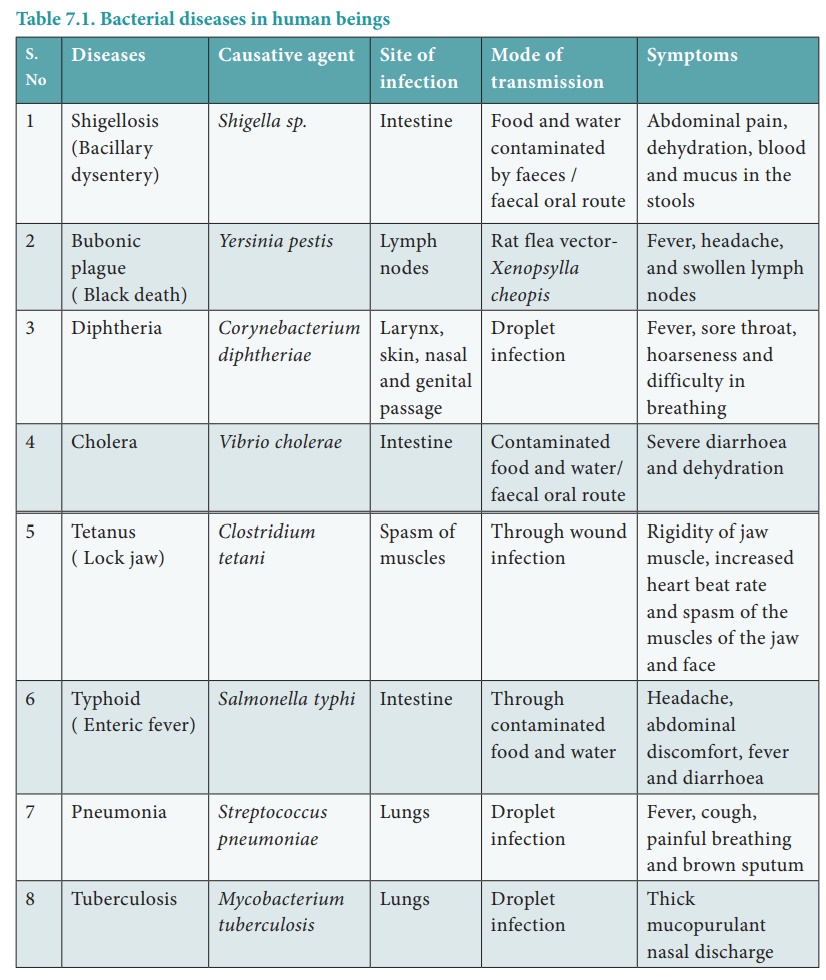 Bacteria spread through air, water or by inhaling the droplets/aerosols or even by sharing utensils, dresses with an infected person. Typhoid fever can be confirmed by Widal test.

Viruses are the smallest intracellular obligate parasites, which multiply within living cells. Outside the living cells they cannot carry out the characteristics of a living organism. Viruses invade living cells, forcing the cells to create new viruses. The new viruses break out of the cell, killing it and invade other cells in the body, causing diseases in human beings. Rhino viruses cause one of the most infectious human ailment called the “Common cold”. 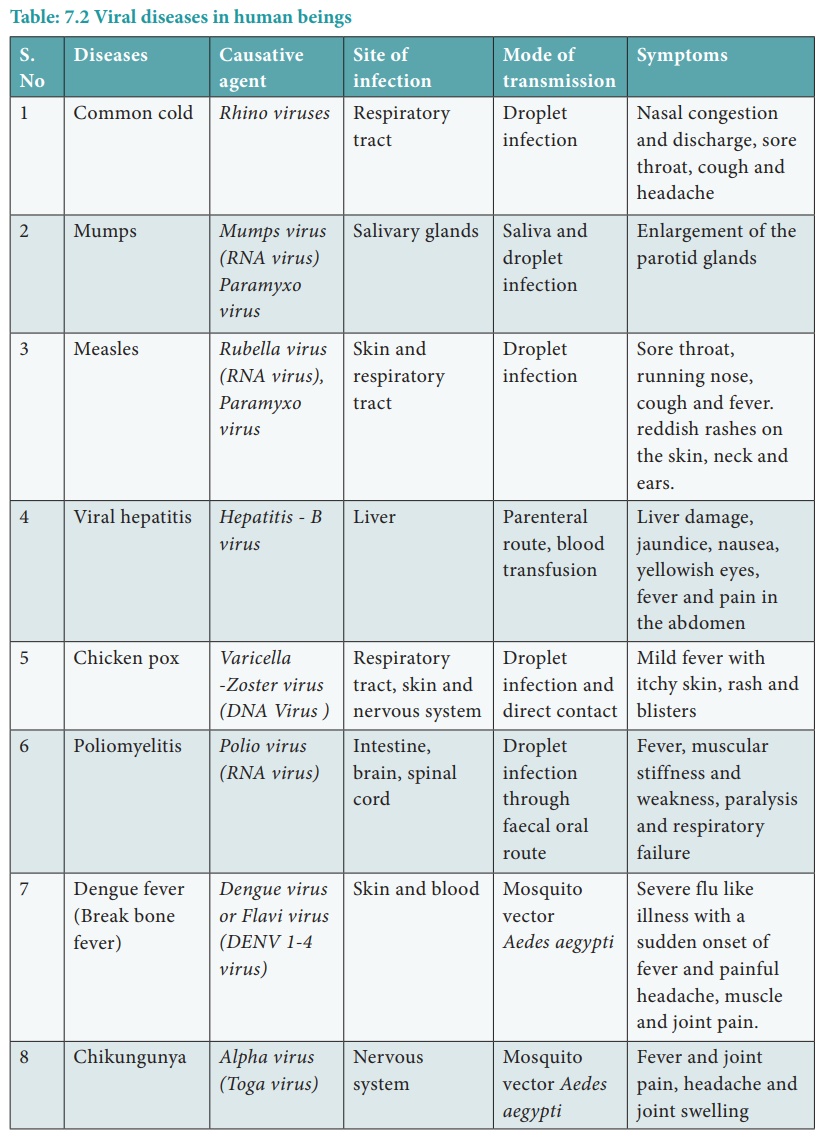 Viral diseases are generally grouped into four types on the basis of the symptoms produced in the body organs.

iv.               Neurotropic diseases (central nervous system affected by rabies and polio). Some common viral diseases of human beings are given in table 7.2.

About 15 genera of protozoans live as parasites within the human body and cause diseases.

Amoebiasis also called amoebic dysentery or amoebic colitis is caused by Entamoeba histolytica, which lives in the human large intestine and feeds on food particles and bacteria (Fig. 7.1). Infective stage of this parasite is the trophozoite, which penetrates the walls of the host intestine (colon) and secretes histolytic enzymes causing ulceration, bleeding, abdominal pain and stools with excess mucus. Symptoms of amoebiasis can range from diarrhoea to dysentery with blood and mucus in the stool. House flies (Musca domestica) acts as a carrier for transmitting the parasite from contaminated faeces and water. 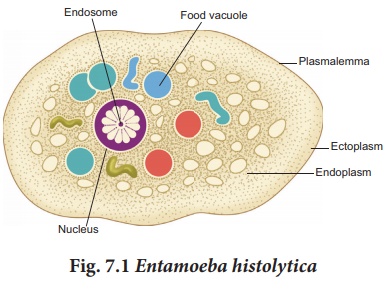 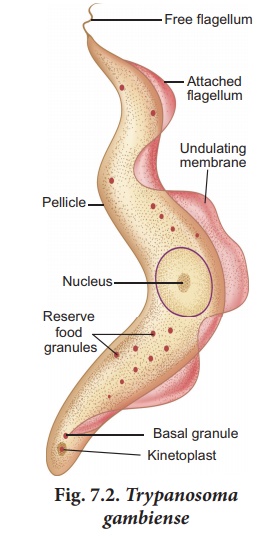 Kala – azar or visceral leishmaniasis is caused by Leishmania donovani, which is transmitted by the vector Phlebotomus (sand fly). Infection may occur in the endothelial cells, bone marrow, liver, lymph glands and blood vessels of the spleen. Symptoms of Kala azar are weight loss, anaemia, fever, enlargement of spleen and liver. 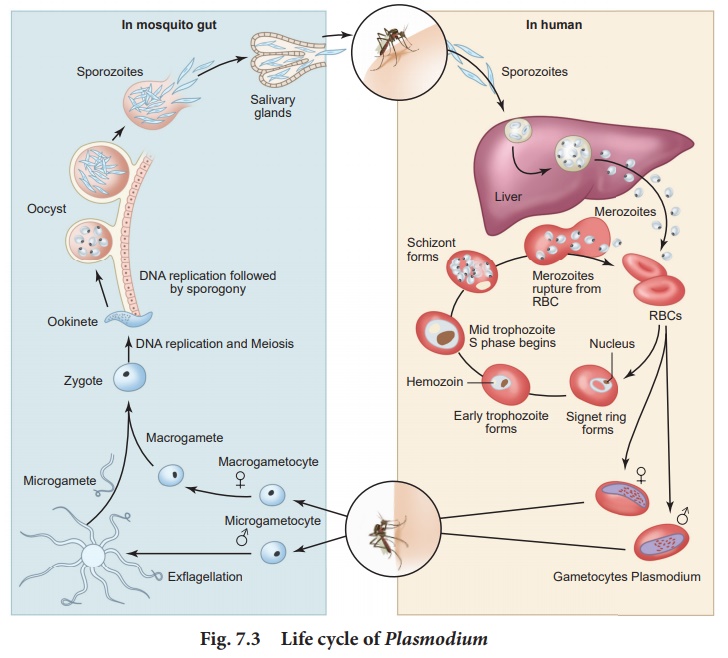 Malaria is caused by different types of Plasmodium species such as P. vivax, P. ovale, P. malariae and P. falciparum (Table 7.3). Plasmodium lives in the RBC of human in its mature condition it is called as trophozoite. It is transmited from one person to another by the bite of the infected female Anopheles mosquito.

The parasite first enters the human blood stream through the bite of an infected female Anopheles mosquito. As it feeds, the mosquito injects the saliva containing the sporozoites. The sporozoite within the blood stream immediately enters the hepatic cells of the liver. Further in the liver they undergo multiple asexual fission (schizogony) and produce merozoites. After being released from liver cells, the merozoites penetrate the RBC’s.

Inside the RBC, the merozoite begins to develop as unicellular trophozoites. The trophozoite grows in size and a central vacuole develops pushing them to one side of cytoplasm and becomes the signet ring stage. The trophozoite nucleus then divides asexually to produce the schizont. The large schizont shows yellowish - brown pigmented granules called Schuffners granules. The schizont divides and produces mononucleated merozoites. Eventually the erythrocyte lyses, releasing the merozoites and haemozoin toxin into the blood stream to infect other erythrocytes. Lysis of red blood cells results in cycles of fever and other symptoms. This erythrocytic stage is cyclic and repeats itself approximately every 48 to 72 hours or longer depending on the species of Plasmodium involved. The sudden release of merozoites triggers an attack on the RBCs. Occasionally, merozoites differentiate into macrogametocytes and microgametocytes. When these are ingested by a mosquito, they develop into male and female gametes respectively.

In the mosquito's gut, the infected erythrocytes lyse and male and female gametes fertilize to form a diploid zygote called ookinete. The ookinete migrates to the mosquito's gut wall and develop into an oocyte. The oocyte undergoes meiosis by a process called sporogony to form sporozoites. These sporozoites migrate to the salivary glands of the mosquito. The cycle is now completed and when the mosquito bites another human host, the sporozoites are injected and the cycle begins a new.

The pathological changes caused by malaria, affects not only the erythrocytes but also the spleen and other visceral organs. Incubation period of malaria is about 12 days. The early symptoms of malaria are headache, nausea and muscular pain.

It is possible to break the transmission cycle by killing the insect vector. Mosquito's lay their eggs in water. Larvae hatch and develop in water but breathe air by moving to the surface. Oil can be sprayed over the water surface, to make it impossible for mosquito larvae and pupae to breathe.

Ponds, drainage ditches and other permanent bodies of water can be stocked with fishes such as Gambusia which feed on mosquito larvae. Preparations containing Bacillus thuringiensis can be sprayed to kill the mosquito larvae since it is not toxic to other forms of life. The best protection against malaria is to avoid being bitten by mosquito. People are advised to use mosquito nets, wire gauging of windows and doors to prevent mosquito bites.

In the 1950’s the World Health Organisation (WHO) introduced the Malaria eradication programme. This programme was not successful due to the resistance of Plasmodium to the drugs used to treat it and resistance of mosquito's to DDT and other insecticides.

Fungi was recognized as a causative agent of human diseases much earlier than bacteria. Dermatomycosis is a cutaneous infection caused by fungi belonging to the genera Trichophyton, Microsporum and Epidermophyton. 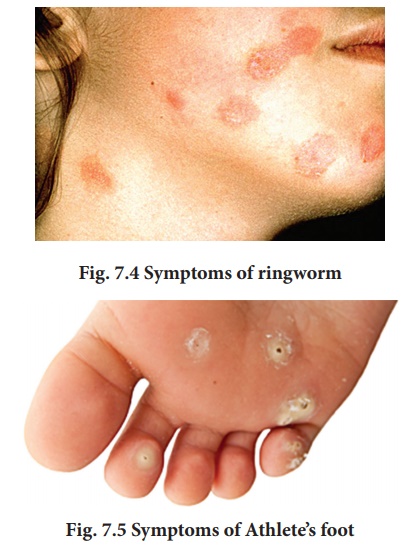 Ringworm is one of the most common fungal disease in humans (Fig. 7.4). Appearance of dry, scaly lesions on the skin, nails and scalp are the main symptoms of the disease. Heat and moisture help these fungi to grow and makes them to thrive in skin folds such as those in the groin or between the toes. Ringworms of the feet is known as Athlete’s foot caused by Tinea pedis (Fig. 7.5) . Ringworms are generally acquired from soil or by using clothes, towels and comb used by infected persons.

Helminthes are mostly endoparasitic in the gut and blood of human beings and cause diseases called helminthiasis. The two most prevalent helminthic diseases are Ascariasis and Filariasis.

Ascaris is a monogenic parasite and exhibits sexual dimorphism. Ascariasis is a disease caused by the intestinal endoparasite Ascaris lumbricoides commonly called the round worms (Fig. 7.6). It is transmitted through ingestion of embryonated eggs through contaminated food and water. Children playing in contaminated soils are also prone to have a chance of transfer of eggs from hand to mouth. 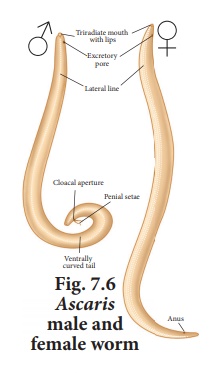 The symptoms of the disease are abdominal pain, vomiting, headache, anaemia, irritability and diarrhoea. A heavy infection can cause nutritional deficiency and severe abdominal pain and causes stunted growth in children. It may also cause enteritis, hepatitis and bronchitis.

Filariasis is caused by Wuchereria bancrofti , commonly called filarial worm. It is found in the lymph vessels and lymph nodes of man (Fig. 7.7). Wuchereria bancrofti is sexually  dimorphic, viviparous and digenic. The life cycle is completed in two hosts, man and the female Culex mosquito The female filarial worm gives rise to juveniles called microfilariae larvae. In the lymph glands, the juveniles develop into adults. The accumulation of the worms block the lymphatic system resulting in inflammation of the lymph nodes. 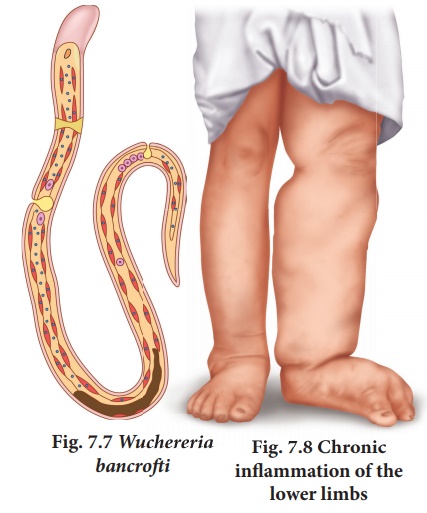 In some cases, the obstruction of lymph vessels causes elephantiasis or filariasis of the limbs,  scrotum and mammary glands (Fig. 7.8).