Adolescence begins with a period of rapid physical and sexual development called puberty to maturity at 12 to 19 years of age.

Adolescence begins with a period of rapid physical and sexual development called puberty to maturity at 12 to 19 years of age. Adolescence is also a highly dynamic period of psychologicaland social changes in individuals. Adolescents are vulnerable to group (peer) pressure and many youngsters are pushed into experimenting with drugs and alcohol. Proper education and guidance would enable youth to say no to drugs and alcohol and to follow a healthy life style.

Alcohol is a psychoactive drug, which acts on the brain, affecting a person’s mind and behaviour. It is a depressant, which slows down the activity of the nervous system. The intake of certain drugs for a purpose other than their normal clinical use in an amount and frequency that impair one’s physical, physiological and psychological functions is called drug abuse.

The drugs which are commonly abused include opioids, cannabinoids, coca-alkaloids, barbiturates, amphetamines and LSD.

Opioids are drugs which bind to specific opioid receptors present in the central nervous system and intestinal tract. Heroin (smack) is chemically diacetyl morphine, which is white, odourless and bitter crystalline compound. 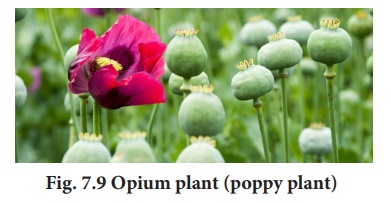 It is obtained by acetylation of morphine, which is extracted from flowers of the poppy plant (Fig. 7.9) . Morphine is one of the strongest pain killer and is used during surgery. It is the most widely abused narcotic drug which acts as a depressant and slows down body functions. 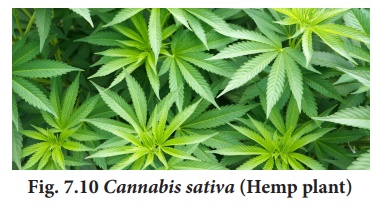 Cannobinoids are a group of chemicals obtained from Cannabis sativa, the Indian hemp plant (Fig. 7.10). Natural cannabinoids are the main source of marijuana, ganja, hashish and charas. It interferes in the transport of the neurotransmitter, dopamine and has a potent stimulating action on the CNS, producing increased energy and a sense of euphoria.

Cocaine is a white powder that is obtained from the leaves of the coca plant, Erythroxylum coca.Itiscommonlycalledcokeorcrack.Cocaine causes serious physical and psychological problems including hallucinations and paranoia. The other plants with hallucinogenic properties are Atropa belladonna and Datura (Fig. 7.11 and Fig. 7.12). 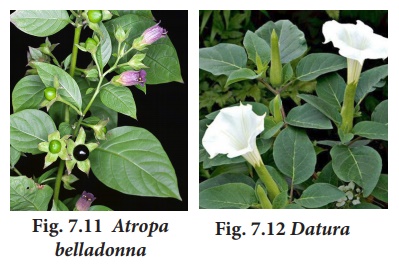 Drugs like methamphetamine, amphetamines, barbiturates, tranquilizers, Lysergic acid diethylamide (LSD) are normally used as medicine to treat patients with mental illness like depression and insomnia and are often abused.

Tobacco is smoked, chewed and used as snuff. It increases the carbon monoxide content of blood and reduces the concentration of haem bound oxygen, thus causing oxygen deficiency in the body. Tobacco contains nicotine, carbon monoxide and tars, which cause problems in the heart, lung and nervous system. Adrenal glands are stimulated by nicotine to release adrenaline and nor adrenaline which increases blood pressure and heart beat.

Addiction is a physical or psychological need to do or take or use certain substance such as alcohol, to the point where it could be harmful to the individual. This addictive behaviour can be personally destructive to a person. Overtime addicts start to lose not only their jobs, homes and money, but also friendship, family relationships and contact with the normal world. Addiction to drugs and alcohol can lead to a psychological attachment to certain effects such as euphoria and temporary feeling of well being.

Repeated use of drugs and alcohol may affect the tolerance level of the receptors present in the body. These receptors then respond only to highest doses of drugs and alcohol leading to greater intake and addiction. Excessive use of drug and alcohol leads to physical and psychological dependence. When psychological dependence develops, the drug user gets mentally ‘hooked on’ to the drug. The drug user constantly thinks only about the drug and has continuous uncontrollable craving for it. This state called “euphoria ” is characterized by mental and emotional preoccupation with the drug.

Physical dependence is a state in which the user’s body requires a continuous presence of the drug. If the intake of the drug or alcohol is abruptly stopped, he or she would develop withdrawal symptoms. In a sense, the body becomes confused and protests against the absence of the drug. The withdrawal symptoms may range from mild tremors to convulsions, severeagitationandfits,depressedmood,anxiety, nervousness, restlessness, irritability, insomnia, dryness of throat, etc, depending on the type of drug abuse.

2. Effects of drugs and alcohol

Short-term effect appears only for a few minutes after the intake of drugs and alcohol. The abuser feels a false sense of well being and a pleasant drowsiness. Some short term effects are euphoria, pain, dullness of senses, alteration in behaviour, blood pressure, narcosis (deep sleep), nausea and vomiting.

Drugs and alcohol have long-term effect that lead to serious damages, because of the constant and excessive use. The physical and mental disturbance makes the life of the user unbearable and torturous. For example heavy drinking permanently damages  the liver and brain.

The use of alcohol during adolescence mayhave long-term effects. Alcohol interferes with the ability of the liver to break down fat. Over time fat accumulation and high levels of alcohol destroy the liver cells and a scar tissue grows in the place of dead cells. This scarring of the liver is called “Liver cirrhosis”. Alcohol irritates the stomach lining due to the production of excess acid leading to ulcers. Excessive alcohol use weakens the heart muscle, causing scar tissue to build up in the cardiac muscle fibers. As a result, heavy drinkers have an increased risk of high blood pressure, stroke, coronary artery disease and heart attack. Korsakoff syndrome, a chronic memory disorder is most commonly caused by alcohol misuse.

It is practically possible to prevent some one from using drugs and alcohol. Here are some ways that help to prevent drug and alcohol abuse.

The biggest reason for teens to start on drugs is due to their friends / peer groups imposing pressure  on them.  Hence, it  is important to have a better group of friends to avoid such harmful drugs and alcohol.

2. Seeking help from parents and peers

Help  from  parents  and  peer  group should be sought immediately so that they can be guided appropriately. Help may even be sought from close and trusted friends. Getting proper advice to sort out their problems would help the young to vent their feelings of anxiety and guilt.

Education  and  counselling create positive attitude to deal with many problems and to accept disappointments in life.

Teachers  and  parents  need  to look for sign that indicate tendency to go in for addiction.

Assistance is available in the form of highly qualified psychologists, psychiatrists and de-addiction and rehabilitation programmes to help individuals to overcome their problems.