Investigations of clinical usage of hGH have focused, generally, on two major areas of hGHbiologic action: (1) linear growth promotion and (2) modulation of metabolism.

Investigations of clinical usage of hGH have focused, generally, on two major areas of hGHbiologic action: (1) linear growth promotion and (2) modulation of metabolism. Growth promoting indica-tions which have been approved for market include growth hormone deficiency (GHD) and idiopathic short stature (ISS) in children, growth failure asso-ciated with chronic renal insufficiency (CRI) in children, growth failure in children born small for gestational age (SGA), short stature in Prader–Willi syndrome (PWS) and Turner syndrome (TS). Modulation of metabolism is the primary biologic action in long-term replacement therapy in adults with GH deficiency of either childhood- or adult-onset, AIDS wasting or cachexia, and in short bowel syndrome (SBS). Additional indications for which hGH has been investigated as a possible therapeutic are summarized in Table 2. 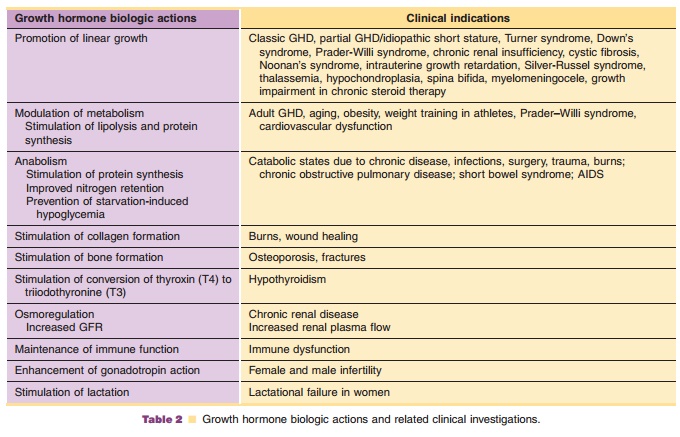 GHD and ISS in Children

The major indication for therapeutic use of hGH is the long-term replacement treatment for children with classic growth hormone deficiency in whom growth failure is due to a lack of adequate endogenous hGH secretion. Diagnosis of hGH deficiency is usually defined based on an inadequate response to two hGH provocation tests implying a functional deficiency in the production or secretion of hGH from the pituitary glandUsual doses range from 0.08–0.35 mg/kg/week admi-nistered as daily SC injections in prepubertal children. Doses up to 0.7 mg/kg/week have been used for adolescent subjects to improve final height (Mauras et al., 2000). hGH treatment results in increased growth velocity and, at least in some populations, enhancement in final adult height. The growth response correlates positively with hGH dose and frequency of injections, and negatively with chronological age at onset of treatment. hGH therapy in children is usually continued until growth has been completed, as evidenced by epiphyseal fusion. Partial GHD and ISS comprise a heterogeneous group of growth failure states due to impaired spontaneous hGH secretion, hGH resistance due to low levels of hGH receptors or possible other defects in either secreted hGH or hGH receptors. hGH treatment in these groups results in acceleration of growth and improvement of final height.

TS is a disease of females caused by partial or total loss of one sex chromosome and is characterized by decreased intrauterine and postnatal growth, short final adult height, incomplete development of the ovaries and secondary sexual characteristics, and other physical abnormalities. Although serum levels of hGH and IGF-1 are not consistently low in this population, hGH treatment (0.33–0.45 mg/kg/week), alone or in combination with oxandrolone, signifi-cantly improves growth rate and final adult height in this patient group (Pasquino, 2004).

PWS is a pediatric disease caused by the functional deletion of the paternal allele of chromosome 15. Clinical manifestations include obesity, hypotonia, short stature, hypogonadism and behavior abnormal-ities. PWS children have especially high rates of morbidity due to obesity-related illnesses. Growth hormone treatment (0.24–0.48 mg/kg/week) has been shown to improve height and, perhaps more impor-tantly, improve body composition, physical strength and agility in PWS children (Allen and Carrel, 2004).

Growth hormone is approved for use in long term treatment of growth failure in children born SGA who fail to manifest catch-up growth. Children born at birth weights and birth lengths more than two standard deviations below the mean are considered SGA. Children who fail to catch up by age two to three are at risk for growing into adults with substantial height deficits (Rappaport, 2004). Growth hormone treatment at doses of 0.24 to 0.48 mg/kg/ week can safely induce catch-up growth, normalize height at an earlier age, and improve potential adult height.

Children with renal disease grow slowly, possibly related to defects in metabolism and/or defects in the IGF-1/hGH axis. Basal serum hGH concentrations and IGF-1 responses to hGH stimulation are usually normal. However, there are reported abnormalities in the IGF-binding protein levels in renal disease patients suggesting possible problems with GH/IGF-1 action. Growth hormone therapy (0.35 mg/kg/ week) in children with CRI results in significant increases in height velocity (Greenbaum et al., 2004). Increases are best during the first year of treatment for younger children with stable renal disease. Responses are less for children on dialysis or children post-transplant receiving corticosteroids.

GHD in Adults and the Elderly

Growth hormone is approved for treatment of SBS, a congenital or acquired condition in which less than ~200 cm of small intestine is present. SBS patients havesevere fluid and nutrient malabsorption and are often dependent upon intravenous parenteral nutrition (IPN). Administration of growth hormone, 0.1 mg/ kg/day for 4 weeks, alone or in combination with glutamine, reduces the volume and frequency of required IPN (Keating and Wellington, 2004). Growth hormone is indicated for use in patients who are also receiving specialized nutritional support. Usage for periods > 4 weeks, or in children, has not been investigated. Usage of growth hormone for SBS remains controversial due to potential risks associated with IGF-1-related fibrosis and cancer (Theiss et al., 2004). Growth hormone is also approved for use in wasting associated with AIDS (Iglesias and Diez, 1999). Growth hormone treatment (~ 0.1 mg/kg daily, max. 6 mg/day), when used with controlled diets, increases body weight and nitrogen retention. rhGH treatment is also under investigation for HIV-associated lipodistro-phy, a syndrome of fat re-distribution and metabolic complications resulting from the highly active antire-troviral therapy commonly used in HIV infection (Burgess and Wanke, 2005).

hGH has been widely used for many years and has been proven to be remarkably safe in pediatric indications (Growth Hormone Research Society, 2001). Adverse events have been reported in a small number of children and include benign intracranial hypertension, glucose intolerance, and the develop-ment of anti-hGH antibodies. The antibodies have not been positively correlated with a loss in efficacy. Growth hormone therapy is also not associated with increased risk of malignancies or tumor recurrence (Growth Hormone Research Society, 2001; Sklar et al., 2002). However, growth hormone treatment should generally not be initiated in children until one year or more after completion of anti-neoplastic therapy.

Growth hormone’s anabolic and lipolytic effects have made it attractive as a performance enhance-ment drug among athletes. Illicit hGH usage has been anecdotally reported for the last 20 years. Detection of rhGH abuse is now possible due to the development of assays which rely on detecting changed ratios of exogenous rhGH (22 kDa only) and endogenous hGH (22 kDa, 20 kDa, and other forms). Screening for rhGHabuse, based on the new ratio assays, was included in the 2006 Olympic games for the first time (McHugh et al., 2005).