Commercially available hGH preparations are sum-marized in Table 1. All recombinant growth hor-mones except Serostim / Saizen / Zorbtive are produced in bacteria or yeast (E. coli, S. cerevisiae). Serostim / Saizen / Zorbtive are produced in mammalian cells (C127 mouse cells). Growth hor-mone produced in E. coli may contain an N-terminal methionine residue. Natural sequence rhGH is produced either by enzymatic cleavage of the methionine during the purification procedure or by periplasmic secretion of rhGH into refractile bodies. The rhGH is then released from the refractile bodies by osmotic shock and the protein recovered and purified. rhGH synthesized in mammalian cells is transported across the endoplasmic reticulum and secreted directly into the culture medium from which it is recovered and purified. 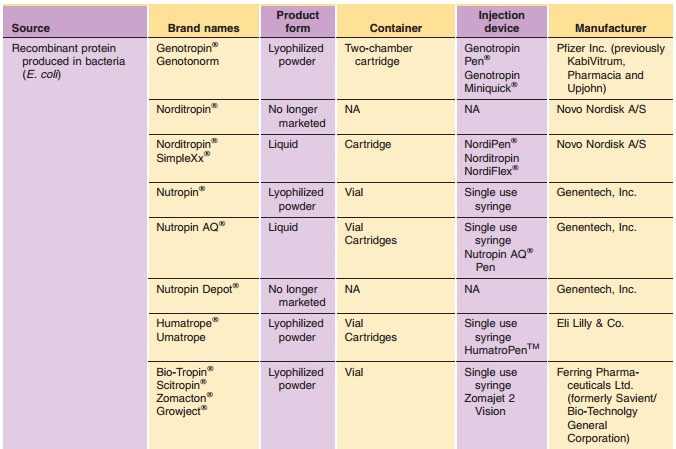 Historically, the potency of hGH products was expressed in international units per mg (IU/mg). The initial standard, established in 1982 for pit-hGH preparations, was 2 IU/mg. The standard for rhGH products was 2.6 IU/mg until September 1994. The current WHO standard, established in September 1994, is 3.0 IU/mg. Dosages are usually expressed as IU/kg or IU/m2 in Europe and Japan and as mg/kg in the United States. However, the use of IU dosages is no longer necessary due to the high level of purity and consistent potency of recombinant hGH products.

All current rhGH products are available as lyophilized or liquid preparations. Lyophilized for-mulations usually include 5 or 10 mg of protein in a glycine and mannitol or sucrose-containing phos-phate buffer excipient. The materials are usually reconstituted with sterile water for injection for single use or with bacteriostatic water or bacteriostatic saline for multiple injection use. Liquid formulations of rhGH (Nutropin AQ , Norditropin , SimpleXx ) contain mannitol or sodium chloride, histidine or citrate buffer, poloxamer 188 or polysorbate 20 and phenol. Product stability has been very good with shelf lives of approximately 2 years at 2 C to 8 C. A long-acting dosage form of rhGH (Nutropin Depot ) was available from 1999 until 2004.