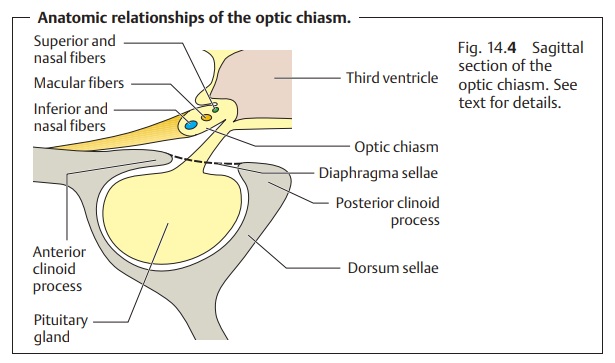 Anatomy: The optic chiasm and the optic nerves (Fig. 14.4) lie on the dia-phragma sellae, a dural fold that forms the roof of the sella turcica.

The optic chiasm and the optic nerves (Fig. 14.4) lie on the dia-phragma sellae, a dural fold that forms the roof of the sella turcica. 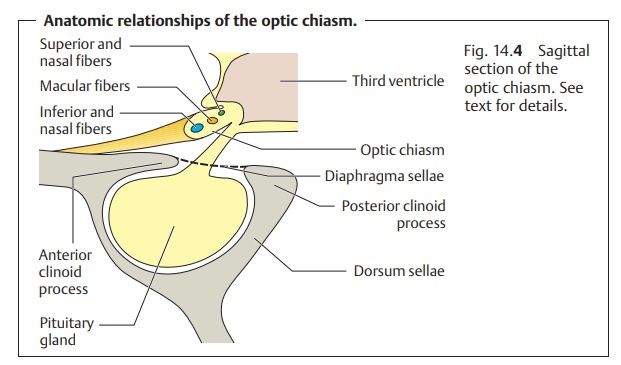 Pituitary adenomas: These are tumors that proceed from the hormone-secreting cells of the anterior lobe of the pituitary gland. As they increase in size superiorly, they reach the anterior margin of the chiasm where they com-press the inferior and nasal fibers that cross there (Fig. 14.5). This leads to an initial visual field defect in the superior temporal quadrant that may laterprogress to complete bilateral temporal hemianopsia. The visual field defect usually spreads in an asymmetrical pattern. The eye with the more severe visual field defect often exhibits the lesser central visual acuity. 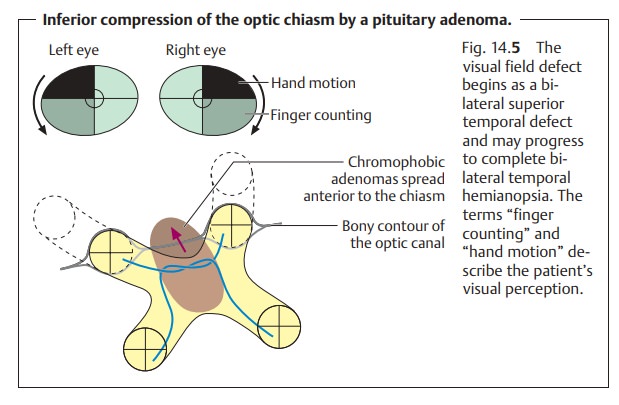 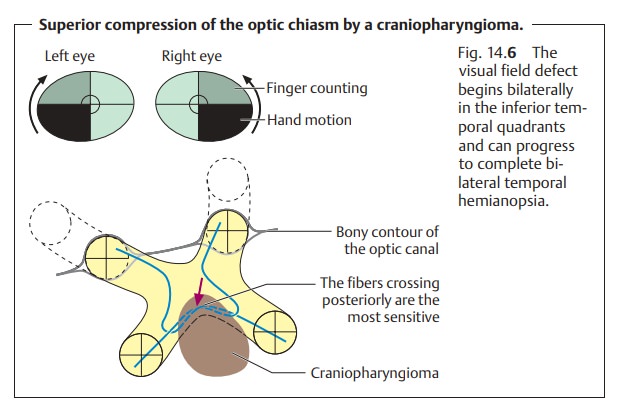 Meningiomas.These are tumors that proceed from the arachnoid. They mayaffect various different parts of the chiasm depending on the site of their origin (Fig. 14.7). When they occur on the tuberculum sellae, they can com-press either the optic nerve or the chiasm. Tumors that compress the junction of the optic nerve and chiasm simultaneously compress the fibers in the arc of Wilbrand. In addition to the ipsilateral central scotoma, this produces a con-tralateral visual field defect in the superior temporal quadrants. Meningiomas can also proceed from the margin of the sphenoid and compress the optic nerve. Those that originate along the olfactory tract can lead to a loss of sense of smell and to compression of the optic nerve. 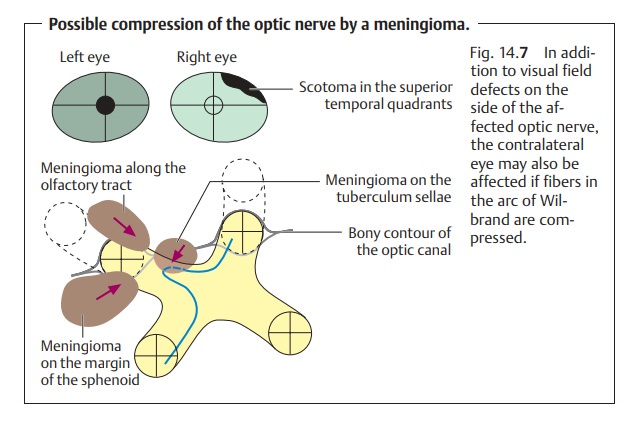 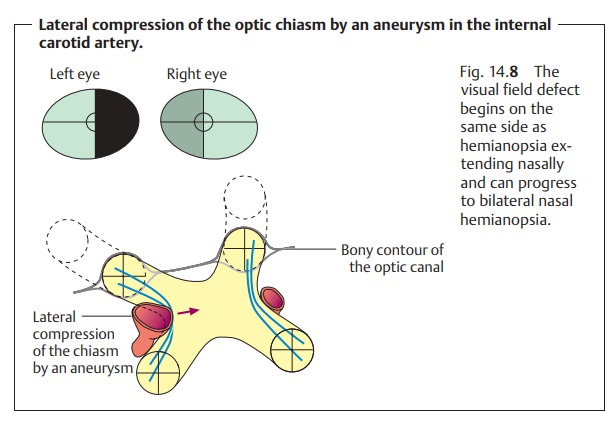 Other changes in the chiasm.Aside from the external effects on the chiasm,changes can occur within the chiasm itself. These include gliomas, demyeli-nation, and trauma. The chiasm can also be involved in infiltrative or inflam-matory changes of the basal leptomeninges (arachnoiditis of the optic chi-asm). The resulting visual field defects are highly variable.

The compres-sion of the optic nerve produces primary descending atrophy of the opticnerve. This is associated with a more or less severe decrease in visual acuity and visual field defects (see Etiology). A visual field defect consisting of het-eronymous bilateral temporal hemianopsia is referred to as chiasm syn-drome. The visual field defects in these cases are frequently incongruent.Chiasm syndrome develops slowly and usually represents the late stage of a pituitary adenoma or craniopharyngioma.

Further diagnostic studies may be performed after visual acuity testing, pupil-lary light reaction testing, perimetry, and ophthalmoscopy of the fundus and optic disk. Such studies include radiographs of the sella turcica (to detect

enlargement or destruction of the sella turcica due to a pituitary adenoma), CT, MRI, carotid arteriography, and, in applicable cases, endocrinologic studies.

This depends on the underlying cause. Neurosurgery may beindicated or medication, such as bromocriptine for a pituitary tumor.

This also depends on the underlying disorder. Ocular functionaldeficits may subside when the disorder is promptly diagnosed and treated.