If a body is retrieved from water (submersed bodies) the death could be due to:

If a body is retrieved from water (submersed bodies) the death could be due to:

1)          natural causes (eg myocardial infarct) before falling into the water; in other words the person suffered a heart attack, died and then fell into the water

3)          unnatural causes (eg gunshot wound) before falling into the water

The situations sketched in (1) to (4) are also known as pseudo-drowning. The person may have died of natural or unnatural causes while outside the water, and then fallen into the water, or these causes may occur in the water. The most common natural cause is a myocardial infarct or heart attack. Certain natural conditions, such as epilepsy can predispose a person to drowning. It is often difficult to distinguish between ante- and post-mortem wounds, as the blood is washed from the body and the wounds appear clean.

1)          Maceration of the skin. This condition develops rapidly in warm water, but may take hours to develop in cold water. This skin is pale and wrinkled, the so-called ``washer-woman's skin'', similar to what it looks like after lying in the bath for a long period. Maceration appears first in areas with a thick keratin layer, such as the fingertips, palms and toes (photo 5). After days in warm water and weeks in cold water the sogged keratin layers become detached, but they can still be used to identify the deceased (eg finger prints), as the small skin grooves are preserved.

2)          Cutis anserina. This condition is non-specific. The skin looks like goose flesh, as the small muscles of the hair follicles contract making the hairs stand up. This can also be observed in other types of death.

3)          Distribution of post-mortem hypostasis. In still water a body will float on its abdomen with the limbs facing downwards. The post-mortem colour changes or lividity will be present over the legs, arms and the ventral (anterior) aspect of the abdomen. With much water movement the body is constantly rolled around, causing more widespread and uniform distribution. The hypostasis is often a pink colour.

4)          Foreign material in airways and upper gastro-intestinal system. Sand, mud, crustaceans and plants are often present in the airways and oesophagus, especially if the body was rolled around vigorously or the water was very deep.

5)          Partial breaking of rigor mortis. Rigor mortis can be broken by the wave movement. However, this will only be partial, as only certain muscle groups will be involved.

Determination of the period of submersion

Water temperature is the most important factor determining the appearance of the body. Water pollution per se plays a minor role, although the temperature of sewage water could rise due to bacterial activity.

The following can be used as guideline to the duration of submersion:

The two groups of death where the death is a direct result of the submersion, with or without aspiration of water or other liquid medium, will now be discussed.

Drowning without the aspiration of fluid into the lungs

Some deaths occur without aspiration of water. Possible causes are:

1)          Acute neurogenic cardiac arrest. Sometimes a person dies instantly when hitting the water, probably from acute neurogenic cardiac arrest. A possible cause may be the sudden stimulation of the skin or the back of the throat by cold water. Alcohol can predispose a person to this condition because it dilates the blood vessels of the skin.

This condition, also known as hydrocussion, is often witnessed in harbours when intoxicated sailors fall into the sea, and die instantly, even before the bodies can be taken out of the water.

2)          Hypothermia. The effect of cold water and subsequent hypothermia is discussed in study unit 10.

3)          Laryngospasm. We have already said that irritation due to the inhaled water will cause a spasm of the vocal cords (laryngospasm). This will then prevent airflow, as well as further aspiration of water, into the lungs. It is not clear whether laryngospasm alone can cause death. Usually it will disappear when the person loses consciousness due to the hypoxia, but he will then aspirate in the unconscious state, and die.

4)          Drowning with breathing apparatus. Divers can die of many causes, such as defective diving gear (leading to suffocation due to hypoxia), carbon dioxide poisoning, decompression disease, nitrogen poisoning (depth-ecstasy), and pulmonary barotrauma (with or without air-embolism). It is important that a diving expert inspect the diving gear, preferably while it is still attached to the body.

Drowning with the aspiration of fluid into the lungs

This refers to the general concept of drowning, where the person inhales water and dies.

The following pathophysiological conditions may play a role:

1)          Hypoxic hypoxia/anoxia. It is obvious that in a medium devoid of air, such as water, the human being is not able to absorb oxygen, which then results in hypoxia/anoxia.

2)          Fluid and electrolyte disturbances. When water is inhaled, rapid absorption through the large and highly permeable surface area of the alveoli of the lungs occurs. Salt water and fresh water have different effects: salt water has the same salt content as blood and is therefore not absorbed so rapidly into the blood, and also does not change the salt content of the blood.

Fresh water is absorbed rapidly and in large volumes by the alveoli. Dilution of the blood occurs (because the salt content of fresh water is lower than that of blood), causing haemodilution, which decreases the haemoglobin level, and leads to anaemia. At the same time the blood volume increases, which results in hypervolaemia of the circulation. Due to the lower salt content of the blood, the red blood cells will swell and burst. The potassium in the cells is released, leading to an increased potassium level (hyperkalaemia). This affects the heart negatively, causing cardiac arrest.

In salt water drownings these severe fluid and electrolyte disturbances do not occur. People therefore survive longer in the sea than in fresh water.

The post-mortem signs depend on the post-mortem interval, because some of the signs of drowning, such as foam in the airways, will disappear with time.

1)          Foam in airways. Due to the mixing of protein, surfactant (a lung secretion to decrease the surface tension in the alveoli) and the inhaled water, a thick foam is produced, which can exude as a plume from the nose. It has a whitish-pink appearance. However, this is not a specific feature, as it can also be seen in conditions such as heart failure and other deaths (fig 8.5, 8.6 and 8.7). 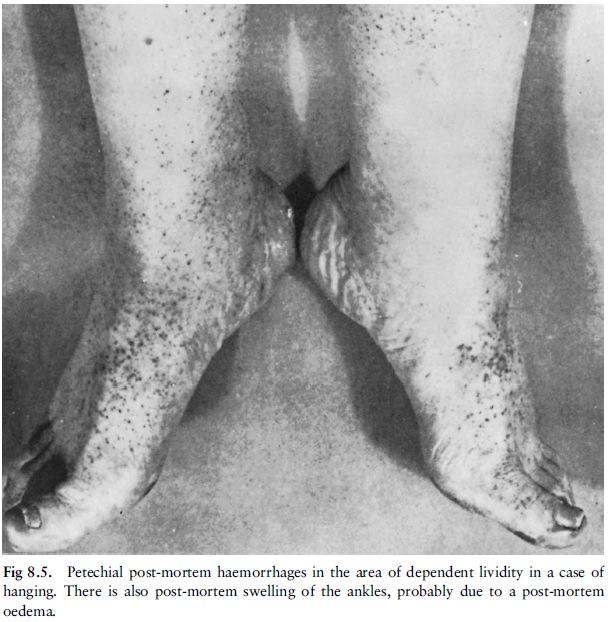 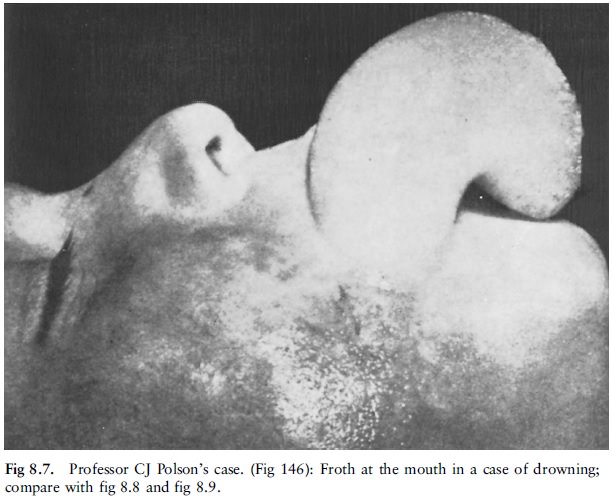 a)           Pulmonary oedema. In this case the inhaled water is present in the lungs and the lungs are typically heavy and congested. With dissection, fluid will drain freely from the surface.

b)          ``Dry lung'' drowning. In these cases pulmonary oedema is absent. This is not an uncommon event and is present in 10 to 20% of drownings. It is most probably caused by complete absorption of all the inhaled water by the lungs, before the person dies from fluid and electrolyte disturbances.

c)           Over-inflation of lungs (emphysema aquasum). This is a common condition and is often seen in association with oedema. The oedematous fluid prevents deflation of the lung, and there is often also over-inflation due to the valve-like effect of the secretions in the lung.

d)          Haemorrhages in lungs. Haemorrhages may occur in the lung tissue or below the pleural surface (subpleural). This is most probably caused by extreme attempts to inhale.

4)          Stomach content. The presence of water in the stomach is unreliable as a sign of drowning; pressure of the water on the submersed body is sufficient to force water into the stomach.

5)          Cataleptic stiffening or cadaver spasm. This phenomenon was discussed in depth in study unit 3. It is an indication that the person was alive when falling into the water.

6)          Post-mortem trauma. Propellers of boats and ships, as well as shells and rocks can cause injury to the submerged body. It is often difficult to differentiate between ante- and post-mortem trauma.

Special tests may be performed in cases of drowning.

Biochemical changes occur when water is inhaled. The chloride concentration of the blood from the left and right ventricles is compared. In a case of drowning in fresh water, the haemodilution effect will lower the chloride concentration as the blood circulates through the lungs (ie the level of chloride in the left ventricle will be lower than that in the right ventricle). In the case of drowning in seawater, the opposite will occur. However, in practice this does not always happen and the test should therefore be interpreted with caution.

Diatoms are microscopically small silica-like organisms which occur freely in nature. It is believed that isolation of a specific type of diatom in the lung tissue, blood and bone-marrow of a deceased person confirms that the person drowned in a specific body of water. However, diatoms are freely found in a number of substances (including toothpaste), and because of this, as well as the fact that isolating them from tissue is so timeconsuming, this test has become obsolete.

It is important to remember that a finding of drowning is often made on circumstantial evidence obtained during the inquest.

It is also important to remember that an individual could be rescued and revived, only to die at a later stage due to lung complications (especially the inhalation of water) or brain damage. This is called secondary or near-drowning. Cases have been described where children had been submerged in ice-cold water for some time, but after resuscitation and warming up, survived with no or little brain damage. This is due to the protective effect of hypothermia on the brain, as it decreases the oxygen requirements of the brain.