Causes of asphyxic death: Deaths due to pressure on the neck

Deaths due to pressure on the neck

Death is caused by one or more of the following.

Airway obstruction. Direct pressure on the larynx and trachea (throat and windpipe) or upward displacement of the larynx (throat) against the pharynx can obstruct the airways. This results in hypoxic-anoxic anoxia.

In a similar manner the base of the tongue may be displayed backwards against the throat.

Compression of the veins in the neck. Compression of the internal and external jugular veins (the veins at the side of the neck) prevents blood flow from the head to the heart. This is especially serious if the carotid arteries are still open, as blood flow into the head region is still possible, but the blood cannot flow out of that region. This leads to stagnation of inter alia blood flow to and from the brain.

Neurogenic stimulation. This is a very important cause of death. At the bifurcation of the carotid arteries in the neck, baro- or pressure receptors are located in a slight dilation in the blood vessel, the carotid sinus. Usually these receptors play a role in controlling blood pressure. If the latter rises, the receptors are stimulated due to the higher pressure in the blood vessels, and via a reflex arc the heartspeed is then suppressed or inhibited. As the vagus nerve forms part of this reflex arc, this reflex is also known as the vaso-vagal response. Mechanical stimulation of these receptors by pressure triggers a parasympathetic response. The heart rate drops (bradycardia), the person could faint, and if severe enough, reflex cardiac arrest may occur. Alcohol, hypoxia, drugs such as cocaine, as well as anxiety and fear can sensitise these receptors and cause an exaggerated response.

Neurogenic cardiac arrest is more common in throttling and hanging than in strangulation. The receptors are partially covered by the neck muscles. During throttling the fingers dig below the muscles and can stimulate the receptors directly. With hanging the knot in the cord often lies directly over the receptors. With strangulation with a ligature, the ligature is usually lower down over the neck, away from the receptors. Blows to the neck can also stimulate the receptors directly or indirectly (like in martial arts). In cases of bolus death, branches of the same nerves supplying these receptors, are stimulated in the back of the throat, and this causes a similar effect. In some individuals the receptors may be very sensitive, and even stimulation by the collar of a shirt can cause the individual to faint.

Combination of the above mechanisms: Throttling is a dynamic process. During the struggle the grip on the neck is continuously changed. More than one of the above causes can therefore be involved. It is also important to remember that hypoxia due to compression of the airways will stimulate the carotid receptors, and therefore increase the risk of neurogenic cardiac arrest.

Throttling (strangulation with the hands)

Throttling is relatively common, especially in domestic murders, sex-associated murders and child murders. In order to overpower and throttle a person, the perpetrator has to have a physical advantage. Females therefore seldom throttle victims (apart from children) and even men don't often succumb to throttling. As has been said throttling is a dynamic process with the hands changing the grip continously. Any of the above causes of death may therefore occur.

The post-mortem signs are local skin wounds, caused by the fingers of the assailant as well as those of the victim. The contusions and abrasions vary in size, and are usually round or oval in shape. They tend to be present mostly on one side of the neck. The distribution (one mark on the one side and four marks on the opposite side) could indicate whether the assailant was left- or right-handed. 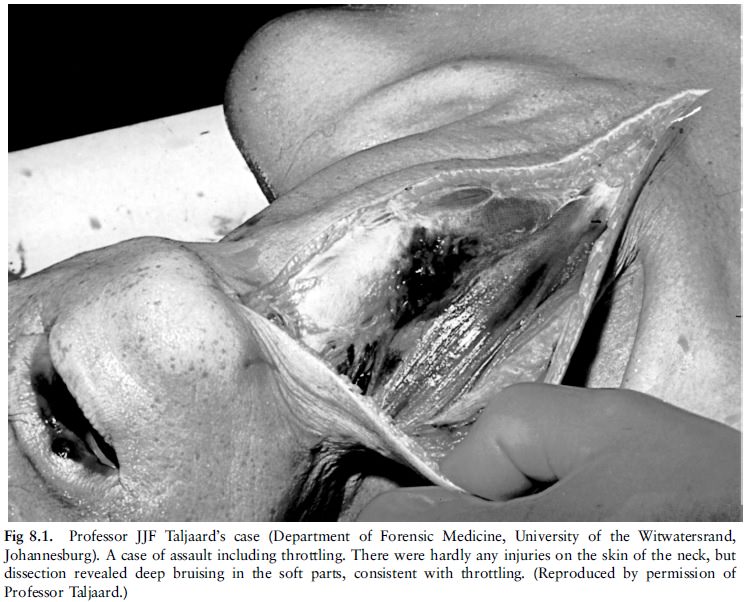 In cases of death due to violence to the neck, the neck structures must be examined carefully. Post-mortem extravasation or leakage of blood during the dissection procedure can easily be confused with ante-mortem haemorrhage. It is therefore important to use a bloodless field dissection technique in all cases of suspicious trauma to the neck. The body is opened with an incision from the suprasternal notch downwards, and the internal organs are removed. The brain is then removed and a block is placed underneath the neck to facilitate draining of the blood. The neck is than dissected in a stepwise manner and all findings noted. Bony structures like the hyoid bone (tongue bone) are also carefully examined.

Signs of asphyxia are often absent, as the death is often caused by neurogenic cardiac arrest due to vasovagal inhibition.

Strangulation with a ligature

In this group of deaths the force is applied to the neck with a ligature or rope. This ligature can be wrapped around the neck, and can even be knotted. If it is very thin (like fishing line) it can cut into the skin. It can also be wound up by means of a stick, the so-called Spanish windlass. In suicide numerous knots and windings may be seen. Strangulation differs from hanging, as the body weight plays no role.

Strangulation can be the result of an accident (when a tie is caught in a rotating wheel or lathe), or homicide or suicide.

The post-mortem findings include local skin lesions, mainly a ligature mark (photos 30 and 39). This is an impression abrasion caused by the ligature. Soft material does not necessarily leave any skin wounds. The ligature may be imbedded due to swelling or oedema of the surrounding soft tissue. The mark usually runs horizontally round the neck, relatively low down, just above or below the laryngeal prominence (Adam's apple). There can be scratches on the skin of the neck made by the victim in an effort to release the ligature. There is less damage to the neck structures than in throttling. ``Asphyxia'' signs are petechial haemorrhages and oedema, and they are often pronounced above the ligature.

·              The neck hold grip, also called the ``carotid sleeper'', is a neck hold used by law enforcement personnel as a means of incapacitating a person during arrest (figs 8.2 and 8.3). The hold is intended to impede blood flow in the carotid arteries by pressure on both sides of the neck. This pressure is applied by the pinching effect of the arm and forearm of the person applying the hold. If properly applied the airway, including the larynx and trachea, should be unaffected while the carotid arteries are compressed, and blood-flow through the vertebral arteries also will not be affected. However, these latter vessels do not supply sufficient blood to the brain, and this will result in temporary loss of consciousness. In addition the carotid sinuses containing the baro-receptors can also be stimulated, causing a reflex action which will decrease the heart rate and lead to loss of consciousness. 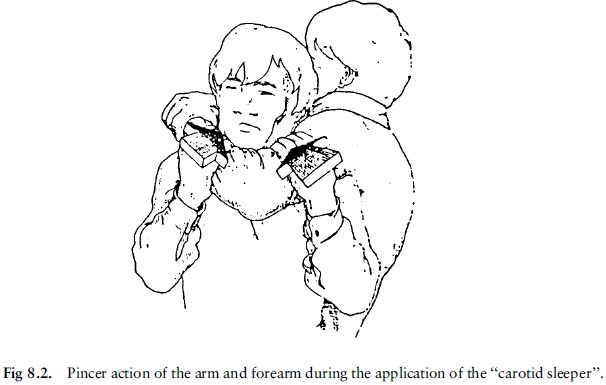 ·              The arm block, or bar arm control, is a hold where the forearm is placed over the front of the neck and the force is applied backwards, causing occlusion of the airways. The base of the tongue is also forced back violently and obstructs the throat. The thyroid cartilage could be damaged. During the struggle to escape from this hold, the carotid sinus can be stimulated. Damage to blood vessels can dislodge atherosclerotic plaques causing a fatal stroke. 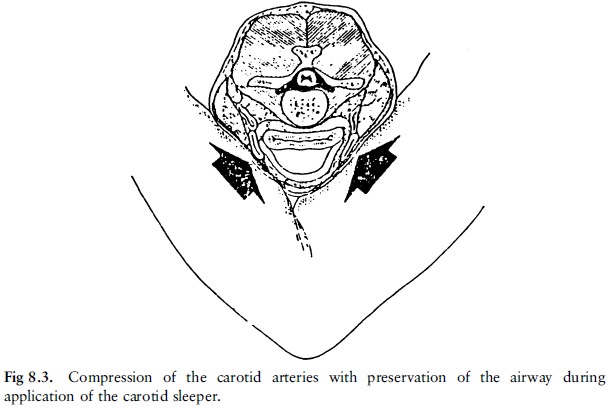 A properly applied neck hold or carotid sleeper is generally safe, while arm blocks or bar arm controls could be dangerous.

There are risk factors that can lead to death during the application of a neck hold:

1)          Men over the age of 40 often have underlying ischaemic heart disease. Stimulation of the carotid sinus, or hypoxia, can cause an abnormal heart rhythm, leading to death. In addition damage to atherosclerotic plaques 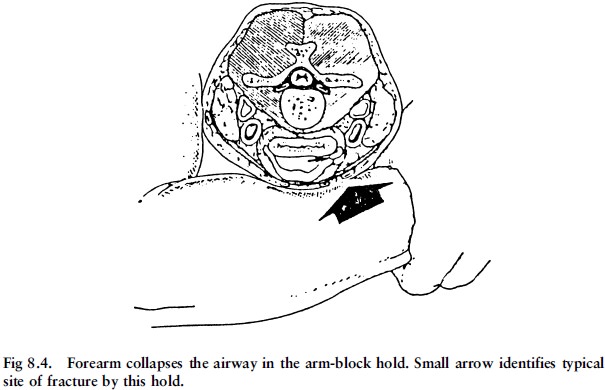 in the neck arteries can cause a thrombo-embolus (blood clot), which can lead to a stroke.

2)          Mentally disturbed persons can be extremely violent, displaying unpredictable behaviour during arrest, so that more force has to be applied during the struggle, with a subsequent higher risk of fatal hypoxia.

3)          Persons with epilepsy are not only vulnerable to the hypoxia which can result from such a neck hold, but they could have convulsions or epileptic seizures during the application of the neck hold, causing more force being applied to the neck.

4)          Persons under the influence of drugs or alcohol also often display violent and unpredictable behaviour during an arrest. The resulting struggle increases the risk of hypoxia

Moreover, the drugs often have a stimulating or sensitising effect on the carotid sinus, increasing the risk of neurogenic cardiac arrest.

5)          Certain drugs, such as digitalis and tricyclic anti-depressants, can cause cardiac arrhythmia (irregular heartbeat), making the heart more susceptible to hypoxia as well as neurogenic cardiac arrest.

6)          A person who runs away in an effort to escape, is usually out of breath when arrested. This relative hypoxia, together with the adrenaline which is secreted in a stress situation, increase the sensitivity of the carotid sinus.