The cardiac cycle is the sequence of events in one heartbeat.

The cardiac cycle is the sequence of events in one heartbeat. In its simplest form, the cardiac cycle is the simultaneous contraction of the two atria, followed a fraction of a second later by the simultaneous contrac-tion of the two ventricles. Systole is another term for contraction. The term for relaxation is diastole. You are probably familiar with these terms as they apply to blood pressure readings. If we apply them to the car-diac cycle, we can say that atrial systole is followed by ventricular systole. There is, however, a significant difference between the movement of blood from the atria to the ventricles and the movement of blood from the ventricles to the arteries. The events of the cardiac cycle are shown in Fig. 12–5. In this traditional representation, the cardiac cycle is depicted in a circle, because one heartbeat follows another, and the begin-ning of atrial systole is at the top (12 o’clock). The size of the segment or arc of the circle indicates how long it takes. Find the segment for atrial systole and the one for ventricular systole, and notice how much larger (meaning “longer”) ventricular systole is. Do you think this might mean that ventricular contraction is more important than atrial contraction? It does, as you will see. Refer to Fig. 12–5 as you read the following. We will begin at the bottom (6 o’clock) where the atria are in the midst of diastole and the ventricles have just completed their systole. The entire heart is relaxed and the atria are filling with blood.

Blood is constantly flowing from the veins into both atria. As more blood accumulates, its pressure forces open the right and left AV valves. Two-thirds of the atrial blood flows passively into the ventri-cles (which brings us to 12 o’clock); the atria then contract to pump the remaining blood into the ven-tricles.

Following their contraction, the atria relax and the ventricles begin to contract. Ventricular contraction forces blood against the flaps of the right and left AV valves and closes them; the force of blood also opens the aortic and pulmonary semilunar valves. As the ventricles continue to contract, they pump blood into the arteries. Notice that blood that enters the arteries must all be pumped. The ventricles then relax, and at the same time blood continues to flow into the atria, and the cycle begins again. 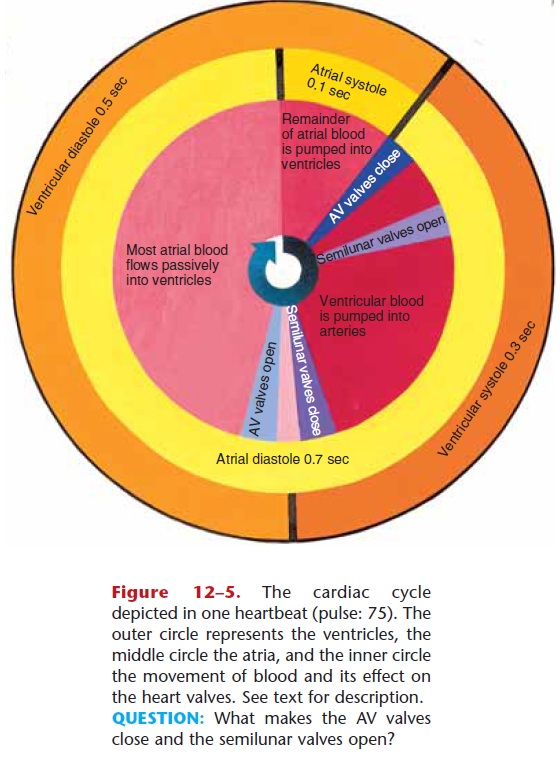 Figure 12–5. The cardiac cycle depicted in one heartbeat (pulse: 75). The outer circle represents the ventricles, the middle circle the atria, and the inner circle the movement of blood and its effect on the heart valves. See text for description.

The important distinction here is that most blood flows passively from atria to ventricles, but all blood to the arteries is actively pumped by the ventricles. For this reason, the proper functioning of the ventri-cles is much more crucial to survival than is atrial functioning.

You may be asking “All this in one heartbeat?” The answer is yes. The cardiac cycle is this precise sequence of events that keeps blood moving from the veins, through the heart, and into the arteries.

The cardiac cycle also creates the heart sounds: Each heartbeat produces two sounds, often called lub-dup, that can be heard with a stethoscope. The first sound, the loudest and longest, is caused by ventricu-lar systole closing the AV valves. The second sound is caused by the closure of the aortic and pulmonary semilunar valves. If any of the valves do not close properly, an extra sound called aheart murmur may be heard.