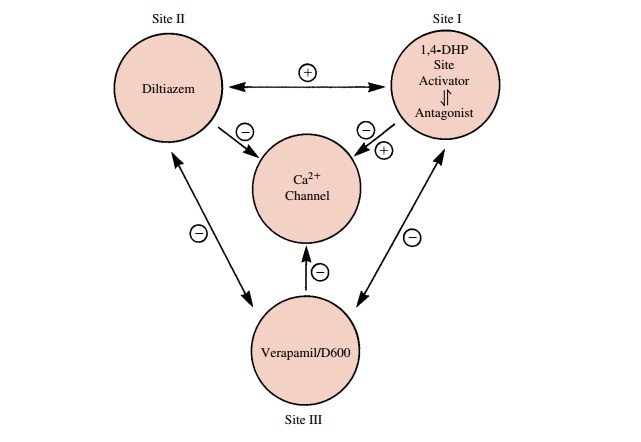 The concept of calcium antagonism as a specific mech-anism of drug action was pioneered by Albrecht Fleckenstein and his colleagues, who observed that ve-rapamil and subsequently other drugs of this class mimicked in reversible fashion the effects of Ca++ withdrawal on cardiac excitability. These drugs inhib-ited the Ca++ component of the ionic currents carried in the cardiac action potential. Because of this activity, these drugs are also referred to as slow channel block-ers, calcium channel antagonists, and calcium entry blockers.

The actions of these drugs must be viewed from the perspective of cellular Ca++ regulation (Fig. 19.1). Ca++ is fundamentally important as a messenger, linking cel-lular excitation and cellular response. This role is made possible by the high inwardly directed Ca++ concentra-tion and electrochemical gradients, by the existence of specific high-affinity Ca++ binding proteins (e.g., calmodulin) that serve as intracellular Ca++ receptors, and by the existence of Ca++ -specific influx, efflux, and sequestration processes. Calcium, in excess, serves as a mediator of cell destruction and death during myo-cardial and neuronal ischemia, neuronal degeneration, and cellular toxicity. The control of excess Ca++ mobi-lization is thus an important contributor to cell and tis-sue protection. 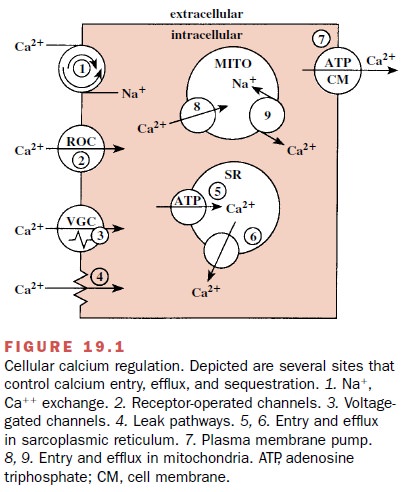 The available Ca++ channel blockers exert their ef-fects primarily at voltage-gated Ca++ channels of the plasma membrane. There are at least several types of channels—L, T, N, P/Q and R—distinguished by their electrophysiological and pharmacological characteris-tics. The blockers act at the L-type channel at three dis-tinct receptor sites (Fig. 19.2). These different receptor interactions underlie, in part, the qualitative and quan-titative differences exhibited by the three principal classes of channel blockers. 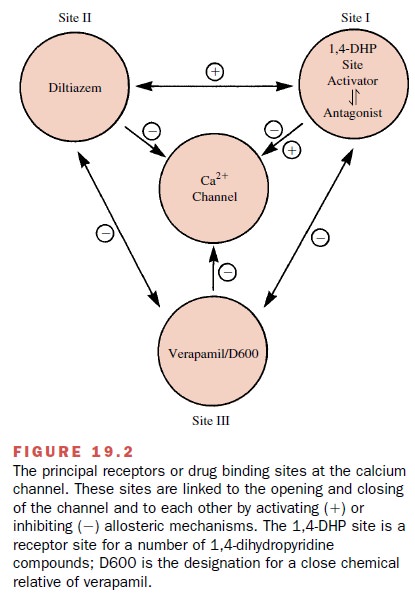 Cellular stimuli that involve Ca++ mobilization by processes other than that at the L-type voltage-gated channels will be either completely or relatively insensi-tive to the channel blockers. This differential sensitivity contributes to the variable sensitivity of vascular and nonvascular smooth muscle to the actions of these drugs, for example, the regional vascular selectivity and the general lack of activity of these agents in respiratory or gastrointestinal smooth muscle disorders.

The activity of the Ca++ channel blockers increases with increasing frequency of stimulation or intensity and duration of membrane depolarization. This use-dependent activity is consistent with a preferred interac-tion of the antagonists with the open or inactivated states of the Ca++ channel rather than with the resting state. This activity is not shared equally by all Ca++ blockers and so may provide a further basis for the therapeutic dif-ferences between them. For example, verapamil and diltiazem are approximately equipotent in cardiac and vascular smooth muscle, whereas nifedipine and all other agents of the 1,4-dihydropyridine class are signifi-cantly more active in vascular smooth muscle. Furthermore, different members of the 1,4-dihydropyri-dine class have different degrees of vascular selectivity. These differences are broadly consistent with the obser-vation that verapamil and diltiazem act preferentially through the open channel state, and nifedipine and its analogues act through the inactivated state.

The clinically available calcium channel antagonists have also proved to be invaluable as molecular probes with which to identify, isolate, and characterize calcium channels of the voltage-gated family. In particular, the 1,4-dihydropyridines with their high affinity, agonist– antagonist properties, and selectivity have become de-fined as molecular markers for the L-type channel.

Synthetic drugs of comparable selectivity and affin-ity to the 1,4-dihydropyridines do not yet exist for the other channel types,T, N, P/Q, and R; these remain char-acterized by complex polypeptide toxins of the aga- and conotoxin classes. Neuronal pharmacology, including that of the central nervous system (CNS), is dominated by the N, P/Q, and R channels. This underscores the normally weak effect of L-channel antagonists on CNS function. Drugs that act at the N, P, and R channels with comparable selectivity and affinity to the 1,4-dihydropyridines may be expected to offer major po-tential for a variety of CNS disorders, including neu-ronal damage and death from ischemic insults.

The Ca++ channel blockers also differ in the extent of their additional pharmacological properties. Verapamil and to a lesser extent diltiazem possess a number of re-ceptor-blocking properties, together with NA+ and K+ channel–blocking activities, that may contribute to their pharmacological profile. Nifedipine and other 1,4-dihy-dropyridines are more selective for the voltage-gated Ca++ channel, but they may also affect other pharmaco-logical properties because their nonpolar properties may lead to cellular accumulation. Together with their channel-blocking properties, these properties may con- tribute to the recently described antiatherogenic actions seen in experimental and clinical states.