Variables are user-defined names assigned to specific memory locations in which the values are stored.

Variables are user-defined names assigned to specific memory locations in which the values are stored. Variables are also identifiers; and hence, the rules for naming the identifiers should be followed while naming a variable. These are called as symbolic variables because these are named locations.

There are two values associated with a symbolic variable; they are R-value and L-value.

• R-value is data stored in a memory location

• L-value is the memory address in which the R-value is stored. 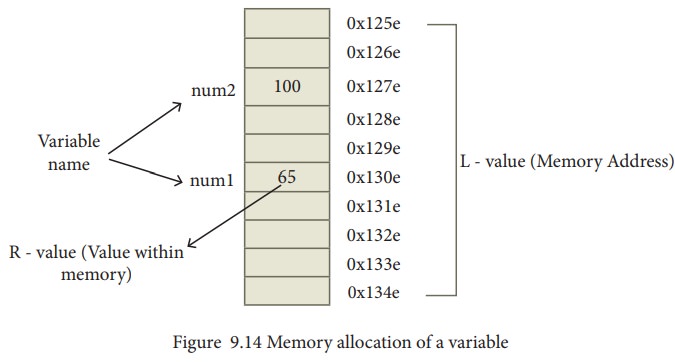 Remember that, the memory addresses are in the form of Hexadecimal values

Every variable should be declared before they are actually used in a program. Declaration is a process to instruct the compiler to allocate memory as per the type that is specified along with the variable name. For example, if you declare a variable as int type, in Dev C++, the compiler allocates 4 bytes of memory. Thus, every variable should be declared along with the type of value to be stored.

Declaration of more than one variable:

More than one variable of the same type can be declared as a single statement using a comma separating the individual variables.

In the above statement, there are three variables declared as int type. Which means, in num1, num2 and sum, you can store only integer values.

For the above declaration, the C++ compiler allocates 4 bytes of memory (i.e. 4 memory boxes) for each variable. 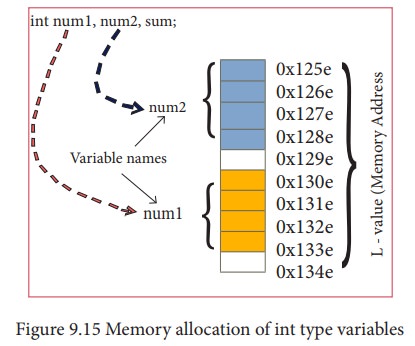 If you declare a variable without any initial value, the memory space allocated to that variable will be occupied with some unknown value. These unknown values are called as “Junk” or “Garbage” values.

In the above program, some unknown values will be occupied in memory that is allocated for the variables num1 and num2; and the statement cout << num1 + num2; will display the sum of those unknown junk values.

Assigning an initial value to a variable during its declaration is called as “Initialization”.

Here, the variables num, pi, and price have been initialized during the declaration. These initial values can be later changed during the program execution.

Curved Surface Area of a cylinder

Variables that are of the same type can be initialized in a single statement.

A variable can be initialized during the execution of a program. It is known as “Dynamic initialization”. For example,

The above two statements can be combined into a single one as follows:

This initializes sum using the known values of num1 and num2 during the execution.

In the above program, after getting the values of num1 and num2, sum is declared and initialized with the addition of those two variables. After that, it is divided by 2.

Illustration 9.8: C++ program to find the perimeter and area of a semi circle

Perimeter of the semicircle is 71.96 cm

const is the keyword used to declare a constant. You already learnt about constant in the previous chapter. const keyword modifies / restricts the accessibility of a variable. So, it is known as Access modifier.

The above declares a variable num with an initial value 100. However, the value of num can be changed during the execution. If you modify the above definition as const int num

100; the variable num becomes a constant and its value will remain as 100 throughout the program, and it can never be changed during the execution.

For the above code, an error message will be displayed as “Cannot modify the const object” in Turbo compiler and “assignment of read only memory num” in Dev C++.

The output of the above program will be