Breast cancer is the second most common malignancy in women, ranking only behind skin cancer.

Breast cancer is the second most common malignancy in women, ranking only behind skin cancer. In addition, it is the secondleading cause of cancer-related death in women. According to the National Cancer Institute, there were 178,500 new cases and approximately 40,500 deaths related to breast cancer in 2007. The steady increase in the incidence of breast cancer can be attributed to the increased use of mammography screening, which has enabled the detection of smaller invasive lesions and the earlier diagnosis of in-situ lesions. Advances in treatment have also helped maintain the downward trend in overall breast cancer mortality. 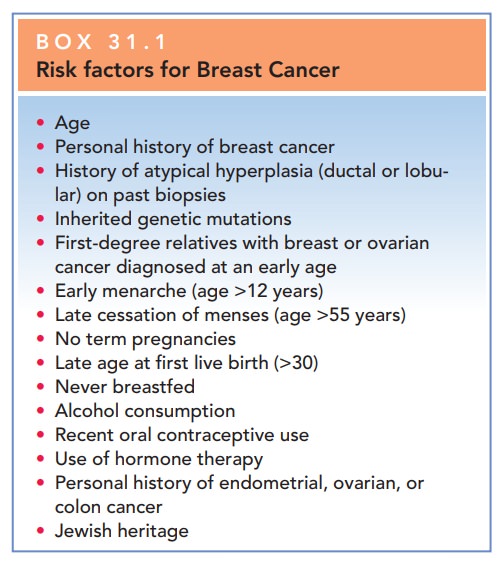 Women who have first-degree relatives (parent, sibling, or offspring) with breast cancer have a higher risk than the general population.

If a woman before the age of 40 is diagnosed with breast cancer, evaluating for genetic mutations that predispose individuals to cancer is reasonable.

The two most commonly discussed genetic mutations linked to breast cancer are the BRCA1 and BRCA2 gene mutations.

In general, women who have an early age of menstrual onset (before the age of 12) and transition through menopause after age 55 are at increased risk of breast cancer. Delayed childbearing and nulliparity also increase the chance of breast cancer.

Breast tissue of young women (along with the bone mar-row and infant thyroid) is highly susceptible to the cancer-causing effects of ionizing radiation. Women who have received a sufficiently large dose of radiation (radiation therapy to treat Hodgkin disease or an enlarged thymus gland) are at risk for radiation-induced breast cancer. The relationship between dose of radiation and risk of cancer is directly linear, although the threshold is unclear. Thus far, epidemiologic studies have not detected a significant increase in cancer risk below a cumulative dose of about 20 cGy. To put this dose into perspective, a typical mam-mogram results in a breast tissue dose of about 0.3 cGy. The time needed for a radiation-induced lesion to develop is about 5 to 10 years from exposure.

Women who consume 2 to 4 alcoholic drinks per week have a 30% greater risk of dying from breast cancer than women who never drink. The exact mechanism of action is unclear, butresearchers speculate that alcohol consumption stimulates the growth and progression of breast cancer by inducing angiogenesis and increasing the expression of vascular endothelial growth factor (VEGF).

The National Cancer Institute (NCI) has developed a computer-based tool to allow clinicians to estimate a woman’s risk of developing invasive breast cancer over the next 5 years and in their lifetime (up to age 90). Thetool is based on a mathematical model of breast cancer risk cal-culation called the Gail Model. Seven risk factors are usedin the calculations: a history of LCIS or DCIS, age, age at onset of menstruation, age at time of the first live birth, number of first-degree relatives with breast can-cer, history of breast biopsy, and race/ethnicity. The use-fulness of the Gail model is limited in patients with second-degree relatives with breast cancer (eg, paternal transmission) and is falsely increased in patients with multiple breast biopsies.

Women at high risk, defined as a 5-year risk of 1.7% or more, can be referred for possible prophylactic therapy. Current prophylactic options include chemoprevention with the selective estrogen receptor modulators tamoxifen and raloxifene, and prophylactic mastectomy. Since all of the options areassociated with significant side effects, individualized risk assessment should be performed to determine whether a patient is a candidate for breast cancer risk reduction and, if so, which option is best.

Malignant tumors of the breast may arise from any of the major components of the breast. The American JointCommittee on Cancer classifies most breast malignancies into one of three histologic categories according to their correspond-ing cells of origin: ductal, lobular, and nipple. Seventy toeighty percent of breast cancers are invasive ductal carcino-mas. These are most common among women in their 50s and have a tendency to spread to regional lymph nodes. Invasive lobular carcinomas comprise 5% to 50% of breast cancers. This type is often multifocal and bilat-eral. Table 31.3 summarizes the differences between the two processes. Paget disease of the nipple presents as a superficial skin lesion similar to eczema. 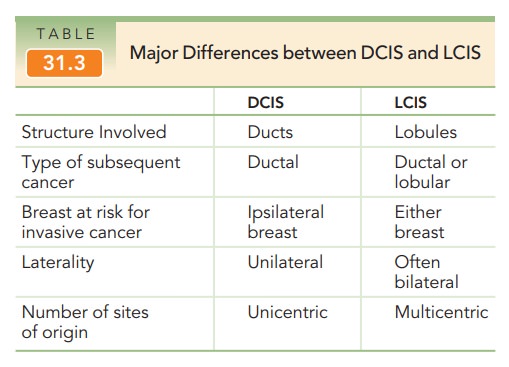 The American Joint Committee on Cancer stages breast malignancies according to the TNM system that describes characteristics of the primary tumor, involvement of regional lymph nodes, and distant metastasis. Surgical stage helps determine the appropriate types of therapy (Tables 31.4 and 31.5). 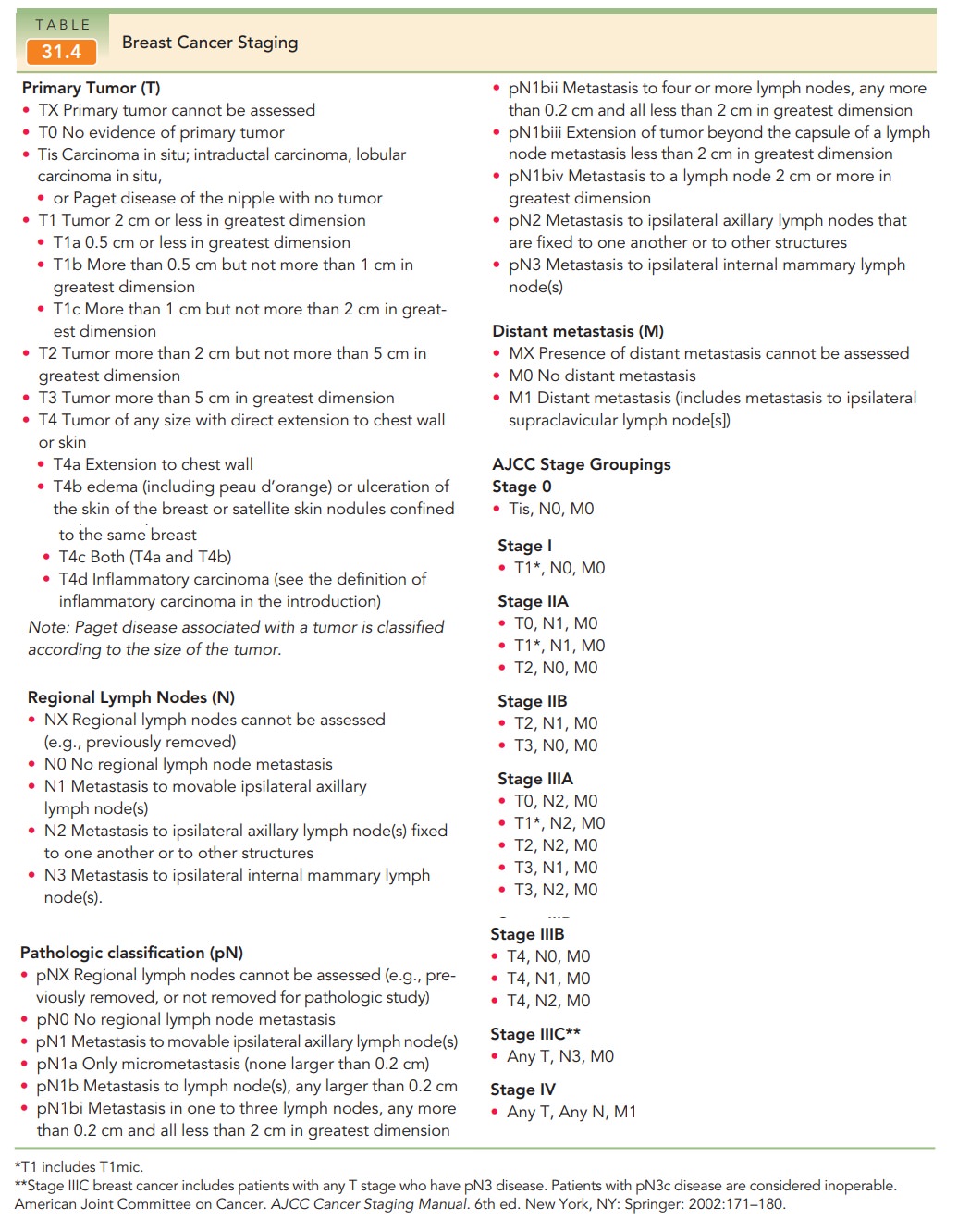 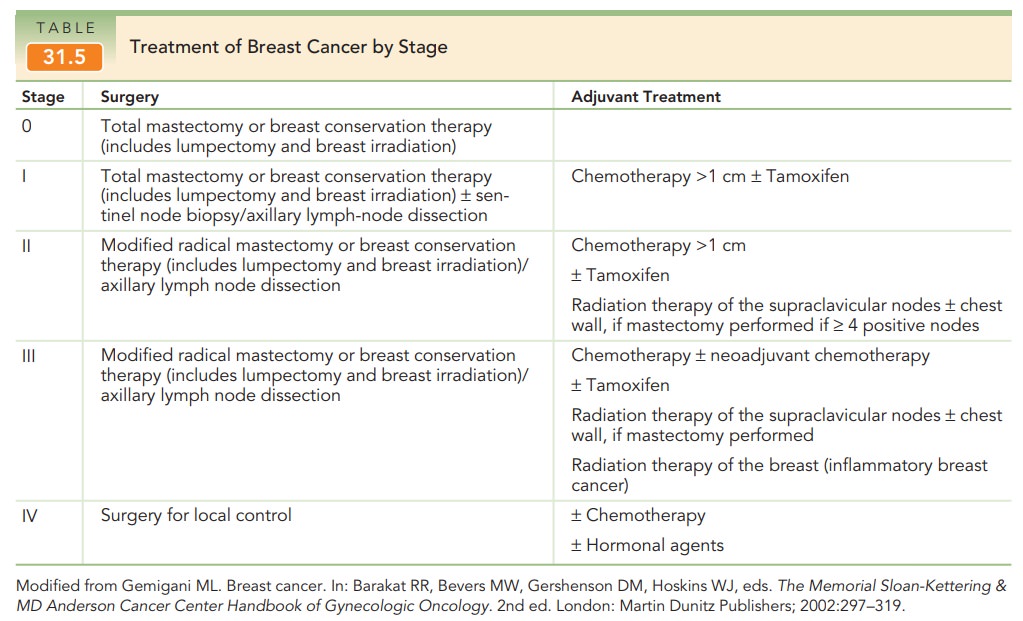 In addition to stage, receptor status is another impor-tant indicator of breast cancer prognosis. Expression ofestrogen or progesterone receptors positively affects prognosis. The Her2/neu (or c-erb-B2) is an oncogene encoding a membrane-bound growth-factor receptor. Overexpression confers a poor prognosis and is noted in 20% to 30% of invasive ductal cancers.

Breast cancer poses both a local regional risk (i.e., to the breast and regional lymph nodes) and a systemic risk. Thesurgical treatment is lumpectomy (breast conservation ther-apy) or mastectomy. Both procedures are aimed at achiev-ing local control. Mastectomy is removal of all breast tissue and the nipple areolar complex with preservation of the pectoralis muscles. A modified radical mastectomy also includes removal of the axillary lymph nodes. Radiation therapy is used in conjunction with mastectomy for later stages of breast cancer, and to accompany lumpectomy and partial mastectomy for early stages of breast cancer. Radiation is an essential component of lumpectomy. This combination yields outcomes that are equal to those of radical mastectomy.

Breast reconstruction should be an option for all women who desire it. Reconstruction can be achieved by several methods,including the insertion of a saline implant under the pectoral muscle or by using a rectus muscle to replace the lost tissue. To prepare for a saline implant, a tissue expander is placed beneath the muscle. Saline is injected into the expander over a period of weeks to months until the space is large enough to accommodate the implant. Breast reconstruction can take place immediately after surgery, or it can be delayed for sev-eral months. Radiation therapy can be given if breast recon-struction has taken place.

Adjuvant (systemic) therapy is used in the treatmentof all stages of breast cancer, regardless of lymph node sta-tus. Adjuvant therapy includes chemotherapeutic drugs that killcancer cells and hormonal therapies such as tamoxifen that act as estrogen antagonists.

Tamoxifen is used to treat women withestrogen receptor-positive breast cancer. It can be used in conjunction with chemotherapy. It is also given as a 5-year course of preventive treatment following surgery. Aromatase inhibitors (AIs) prevent the production ofestrogen in postmenopausal women.

AIs are used to extend survival in women with metastatic cancer, as primary adjuvant therapy, and in conjunction with tamoxifen to prevent cancer recurrence.

Another drug used to treat breast cancer is trastuzumab. It acts on membrane-bound protein produced by Her2/neu. If a patient’s cancer is found to overexpress the Her2/neu protein, trastuzumab can be given as adjuvant therapy. Trastuzumabis associated with significant side effects, including heart failure, respiratory problems, and life-threatening allergic reactions.

Obstetrician-gynecologists are in the unique position of providing care for women who have been treated for breast cancer. For some women, the continuation of care years, follow-up appointments occur every 3 to 6 months and then annually after that. Annual mammography and physical exams should continue indefinitely. Most breast cancer recurrence will occur within 5 years of primary therapy.