Benign breast disease includes a large number of condi-tions that can significantly affect a woman’s quality of life.

Benign breast disease includes a large number of condi-tions that can significantly affect a woman’s quality of life. With accurate diagnosis, many benign breast conditions can be effectively treated with medications or other mea-sures. Women presenting with a breast mass should also be evaluated for their risk of breast cancer.

Mastalgia, or breast pain, can be divided into three categories:cyclic, noncyclic, and extramammary (nonbreast) pain. Cyclicmastalgia begins with the luteal phase of the menstrualcycle and resolves after the onset of menses. The pain is generally bilateral and often involves the upper outer quadrants of the breast. Noncyclic mastalgia is not associated with the menstrual cycle and includes such eti-ologies as tumors, mastitis, cysts, and a history of breast surgery. In some women, noncyclic mastalgia is idiopathic and no cause is found. Noncyclic pain has also been associ-ated with some medications, including hormonal medica-tions, antidepressants such as sertraline and amitriptyline, and antihypertensive drugs, in addition to others. If the onset of mastalgia is associated with the start of hormonal therapy, stopping or reducing the hormones may be ben-eficial. Nonmammary pain can be caused by a number of conditions, such as chest wall trauma, rib fractures, and fibromyalgia. Treatment for musculoskeletal disorders includes antiinflammatory drugs, but more serious causes of chest pain, such as angina, need to be ruled out.

The only medication approved by the FDA for treat-ing mastalgia is danazol, but it has significant side effects. Other hormonal therapies that may decrease pain include bromocriptine and gonadotropin-releasing hormone ago-nists, but these drugs also have side effects that limit their widespread use. Lisuride maleate is a dopamine agonist that has shown pain-reducing effects, and it has fewer side effects than bromocriptine. Selective estrogen receptor modula-tors, such as tamoxifen, also have a role in treating severe mastal-gia. These medications act as estrogen antagonists in thebreast. Side effects of tamoxifen include an increased risk of endometrial hyperplasia and deep venous thrombosis, as well as hot flushes and vaginal bleeding. A recent study concluded that side effects are reduced when the medica-tion is given in smaller doses.

Tamoxifen should be used only for cases of severe mastalgia that does not respond to other therapies.

Some women with cyclic mastalgia have reported a decrease in pain with oral contraceptives or the injectable contraceptive medroxyprogesterone acetate.

Nonpharmacologic measures to help relieve breast pain include a properly fitting brassiere or a sports bra worn throughout the day or during exercise, weight reduction, and regular exercise. Although no studies have demon-strated the efficacy of these measures, they are worth recommending to patients and may help relieve pain.

Nipple discharge is usually benign, but may be an early sign of endocrine dysfunction or cancer. The color, consistency, and whether the discharge is bilateral or unilateral can yield important clues about its cause. A nonspontaneous, non-bloody, bilateral nipple discharge is usually attributed to fibrocystic changes of the breast or ductal ectasia, a con-dition characterized by dilation of the mammary ducts, periductal fibrosis, and inflammation. Ductal ectasia is seen in adolescent women as well as in perimenopausal women. Milky discharge is common during childbearing, but it can also be associated with other endocrinologic abnormalities (hyperprolactinemia or hypothyroidism) and medications (oral contraceptives and tricyclic anti-depressants). Purulent discharge may indicate an infectious etiology and may be due to mastitis or a breast abscess. Green, yellow, or brown sticky discharge can be due to duc-tal ectasia or fibrocystic changes of the breast.

Bloody, unilateral nipple discharge may be caused by an invasive ductal carcinoma, intraductal papilloma, or an intraductal carcinoma. Patients with nipple discharge of this type usually require ductography and ductal excision. Breast ductography is an imaging technique that can reveal the location of an intraductal lesion. A new technique thatemploys fiberoptic technology, fiberoptic ductoscopy (FDS), allows the direct visualization of the breast ducts, as well as sampling of ductal cells. However, this modality is not widely available.

The most worrisome finding for patients and clinicians is an unexplained breast mass. Some characteristics of breast masses that suggest malignancy include size greater than 2 cm, immobility, poorly defined margins, firmness, skin dimpling or color changes, retraction or change in the nipple (e.g., scaling), bloody nipple discharge, and ipsilat-eral lymphadenopathy. The growth rate of a tumor in the breast is thought to be constant from the time of its ori-gin. It is estimated that it takes an average of 5 years for a tumor to reach palpable size.

A variety of benign breast masses are found on screening mammograms or incidentally. Table 31.2 summarizes the three morphologic categories and their associated risk of developing invasive breast cancer. 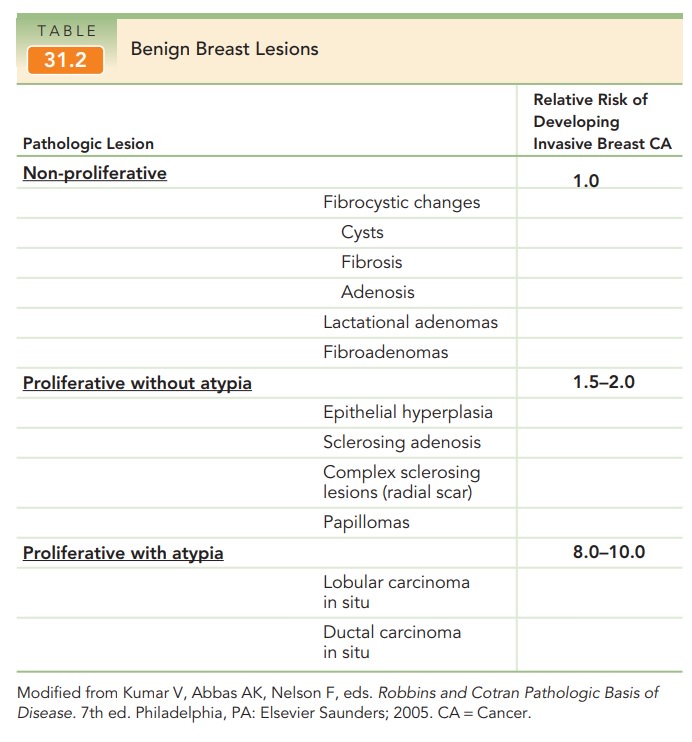 Fibrocystic changes of the breast are a spectrum of featuresthat can be observed in the normal breast. Lobules of thebreast may dilate and form cysts of varying sizes. The cyst walls are lined by flattened atrophic epithelium or may be modified through apocrine metaplasia. If these cysts rup-ture, the resulting scarring and inflammation may lead to fibrotic changes which make the breast feel firm. An increase in the number of glands with associated lobular growth is known as adenosis. In this case, the architecture of the lobule remains unchanged. In some lactating women, a palpable lactation adenoma may arise secondary to an exaggerated hormonal response.

Simple fibroadenomas are common tumors found inwomen in their late teens and early twenties. These masses are solid, round, rubbery, and mobile on examination.

The tumors do have structural and glandular components in the mass. Although they do not have malignant poten-tial, they can enlarge in pregnancy and cause discomfort.

These lesions are commonly found on mammography and do not usually cause a palpable mass. Histologically, they represent proliferation of cells of the ductal or lobular epithelium. The cells themselves are normal, i.e., nonmalignant.

In a normal breast, only myoepithelial cells and a single layer of luminal cells rest on the basement. If there are more than 2 cell layers, the abnormality is known as epithelial hyperplasia. If there is increased fibrosiswithin the expanded lobule, with distortion and compres-sion of the epithelium, the lesion is termed sclerosingadenosis. A radial scar (or complex sclerosing lesion) is anidus of tubules entrapped in a densely hyalinized stroma surrounded by radiating arms of epithelium. The lesion mimics an invasive carcinoma. Finally, papillomas are intraductal growths composed of abundant stroma and lined by both luminal and myoepithelial cells. Solitary intraductal papillomas are found in the major lactiferous ducts of women, typically between the ages of 30 and 50, and cause a serous or serosanguineous drainage.

When malignant cells replace the normal epithelium lining the ducts or lobules, the lesion is known as a carcinoma in situ. The basement membrane remains intact and, therefore, the cells cannot metastasize.

There are two major types of carcinoma in situ: lob-ular carcinoma in situ (LCIS) and ductal carcinoma in situ (DCIS). LCIS is characterized by obliteration of thelumina of the glandular acini by a uniform population of small, atypical cells. In DCIS, the ducts are filled with atyp-ical epithelial cells. Women with DCIS are at increased risk of developing invasive cancer or a recurrence of the DCIS lesion. For these reasons, DCIS should be evaluated with core-needle biopsy followed by surgical biopsy or excision. Management of LCIS and its related condition, atypical lobular hyperplasia, consists of excisional biopsy. Following treatment of both LCIS and DCIS, preventive ther-apy with selective estrogen receptor modulators such as tamox-ifen has been shown to reduce the risk of invasive breast cancer in these patients.