The GM crops are fast becoming a part of agriculture throughout the world because of their contribution to the increased crop productivity and to global food, feed and fibre security, besides their use in health-care and industry.

The GM crops are fast becoming a part of agriculture throughout the world because of their contribution to the increased crop productivity and to global food, feed and fibre security, besides their use in health-care and industry. However, the constraints associated with public acceptance of transgenic crops continue to be important challenges facing the global community. The following are the major concerns about GM crops and GM foods:

•         The safety of GM food for human and animal consumption (e.g. GM food may cause allergenicity).

•         The effect of GM crops on biodiversity and environment.

•         The effect of GM crops on non-target and beneficial insects/microbes.

•         Transgenes may escape through pollen to related plant species (gene pollution) andmay lead to the development of super weeds.

•         The GM crops may change the fundamental vegetable nature of plants as the genes from animals (e.g. fish or mouse) are being introduced into crop plants.

•         The GM crops may lead to the change in the evolutionary pattern.

Unfortunately, the public debate over the benefits and hazards of plant gene technology suffers from an astounding array of misinformation, misunderstanding and manipulation. In fact, with the continuing accumulation of evidence of safety and efficiency, and the complete absence of any evidence of harm to the humans and animals as well as the environment, more and more consumers are becoming comfortable because of the increased awareness about the potential of the plant genetic engineering. Further, the transgenic crops (e.g. cotton, tomato, corn and soybean) which have already entered the market place (which carry a label, i.e., GM crop or GM food in several countries were subjected for the extensive field trials for environmental safety related to wild species and competitive performance of transgenic and toxic effects as per the standard regulatory policies before they were approved for commercialisation. In fact, in 2009, a record of 14 million farmers from 25 countries cultivated 134 million hectares (330 million acres) with the crops that were genetically engineered for herbicide, insect resistance, delayed fruit ripening and improved oil quality. The global area of biotech crops planted from 1996 to 2009 is shown in Fig. 12. 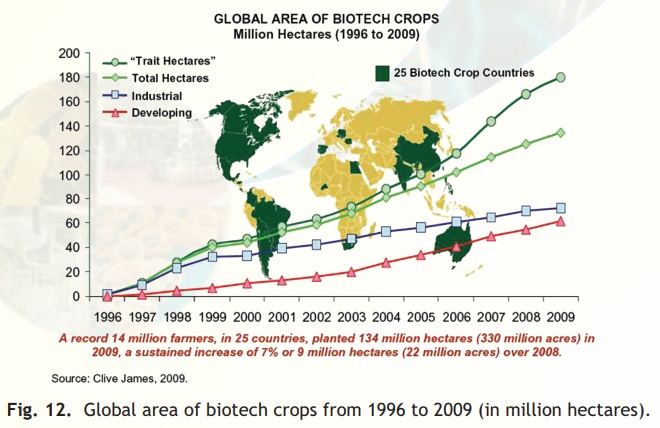 Nevertheless, the thorough assessment of the risks associated with transgenics for plants, animals and humans is important before they are released. Foods or food ingredients derived from GMOs must be shown to be as safe as or safer than their traditional counterpart before they can be recommended for public use. In general, many scientists believe that plant genetic engineering is the 'technology' that can solve various human problems, especially hunger and disease.