Animal cells, just as plant cells, will continue to grow outside the living organism if supplied with the appropriate nutrients and growth conditions.

Animal cells, just as plant cells, will continue to grow outside the living organism if supplied with the appropriate nutrients and growth conditions. The process of growing of cells under laboratory conditions is called Cell Culture. It is carried out in vitro('within glass') as opposed to in vivo ('within the living'). The advantage and limitations of animal cell culture are given in Table 1. A homogenous population of cells derived from a single parental cell is called a clone. Therefore, all cells within a clonal population are genetically identical. The growth rate of animal cells is relatively slow and usually require 18 to 24 hour to divide. This makes the animal cell culture vulnerable to contamination, as a small number of bacteria would soon outgrow a larger population of animal cells. The animal cell culture became a routine laboratory technique in 1950s after George Gay established the first human cell line (HeLa) from cervix cancer that led to several important discoveries in medical sciences. The need for cell culture, especially at large scales, became apparent with the need for viral vaccines. 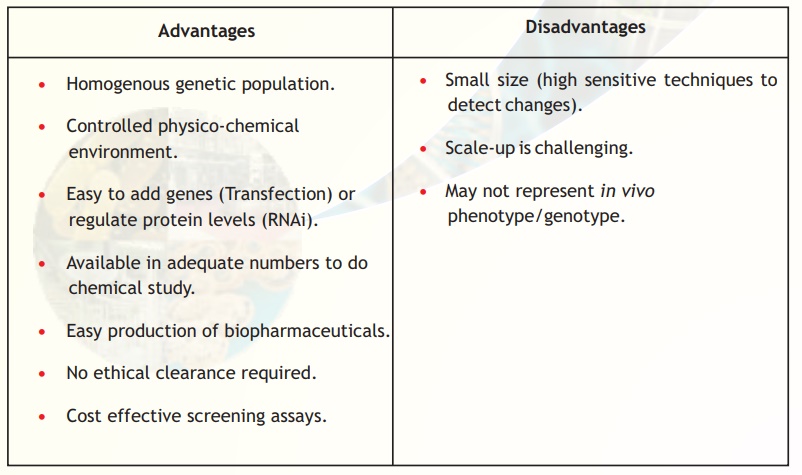 Advent of recombinant DNA technologies in the 1970s, enabled the expression of mammalian genes in bacteria. However, soon it was realized that large proteins or glycoproteins of therapeutic value could not be produced in bacteria. This prompted the usage of animal cell lines for large-scale production of therapeutic proteins. The development of hybridoma technology allowed us to produce large quantities of monoclonal antibodies of immense diagnostic and therapeutic values. Further, recent advances in the area of stem cells, tissue engineering and gene therapy are likely to open new treatment regimens.