Erythropoietin (EPO) is a glycoprotein hormone that is involved in RBC production (erythropoiesis) and wound healing. EPO stimulates the bone marrow to produce more red cells and thereby increase the oxygen-carrying capacity of the blood. It is produced in response to hypoxia (shortage of oxygen) or anoxia (lack of oxygen) caused by anaemia. EPO is useful in the treatment of certain types of anemia such as anemia due to cancer, chronic renal failure and treatment of AIDS. Recombinant human EPO (r-HuEPO) has been produced using Chinese Hamster Ovary (CHO) cell lines. The use of r-HuEPO is advantageous over blood transfusion as it does not require donors or transfusion facilities, and there is no risk of transfusion-associated disease.

Haemophilia A is a common heritable genetic disorder where the body lacks the ability to produce Factor VIII required for blood clotting. Like EPO, factor VIII is also a glycoprotein and has been produced in CHO cells due to its large structure.

Hemophilia B or Christmas disease is the second most common type of bleeding disorder due to deficiency of factor IX. Recombinant Factor IX produced in CHO cells is used to treat haemophilia B.

tPA is a serine protease that catalyzes the conversion of plasminogen to plasmin which is responsible for dissolving blood clots. It is approved for use in certain patients having a heart attack or stroke. tPA is the first drug to be produced through mammalian cell culture (Fig. 6). 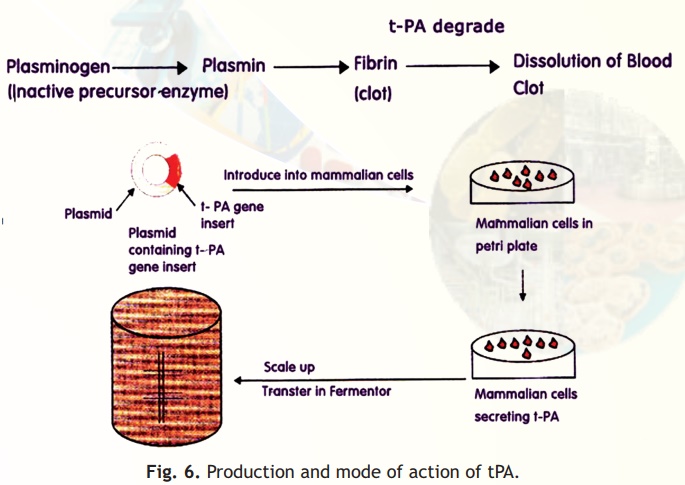 Fig. 6. Production and mode of action of tPA.

It has been observed that antibodies bind to specific domains of macromolecules (antigens) known as epitopes. Antibodies present in serum are a heterologous population released by different populations of B-Iymphocytes and therefore are known as polyclonal antibodies. Monoclonal antibodies (mAbs), on the other hand bind specifically to an epitope on an antigen and therefore are useful in detecting specific antigens (diagnostics) or blocking their binding by other molecules. mAbs are produced by antigen-activated B lymphocytes that have been immortalised by hybridising (fusing) them with a myeloma cell (cancerous lymphocyte). Ceasar Milstein and George Kohler (Nobel Prize winners) developed hybridoma technology by fusing antibody producing B cells with myeloma cells using polyethylene glycol. The hybrid cells retain the ability of B cells to secrete antibody and the ability of myeloma cells to grow indefinitely. The hybrid clones when grown in culture produces epitope-specific mAb (Fig. 7). This technology has revolutionised the area of diagnostics and antibody-based therapies. The availability of monoclonal antibodies has helped in early detection of many infectious diseases like hepatitis and AIDS. 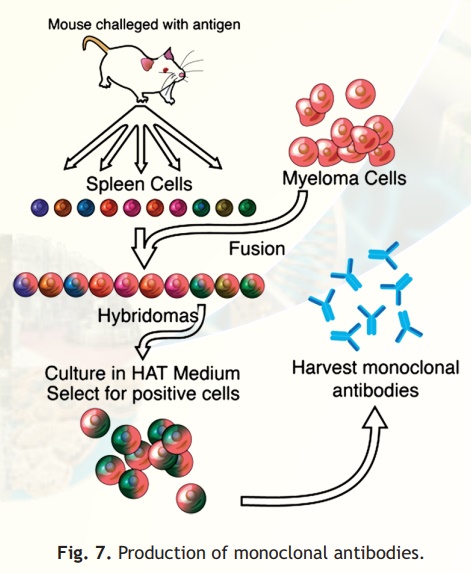 OKT-3 is monab-CD3, an immunosuppressant drug given intravenously to reverse acute rejection of transplanted organs such as heart, kidney and liver. OKT3 is the first monoclonal antibody to be used for the treatment of patients. OKT3 acts by blocking the function of T cells which play a major role in acute graft rejection (Fig. 8). OKT3 binds and blocks the function of a cell surface molecule called CD3 in T cells. The binding of OKT3 to T cells results is followed by blocking of their functions. After OKT3 therapy is over, T cell function usually returns to normal within a week. 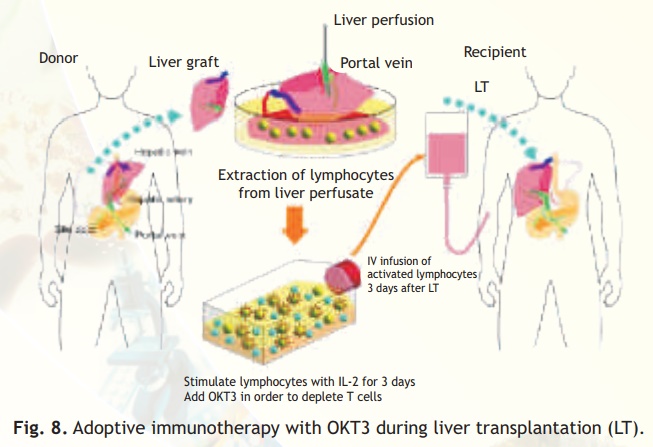 Herceptin (trastuzumab) is a monoclonal antibody approved for therapy of early-stage breast cancer that is Human Epidermal growth factor Receptor 2-positive (HER2+). These cell surface receptors receive signals that help cells to grow and multiply. Herceptin works by attaching itself to HER2 receptors by blocking them from receiving growth signals. The result is impaired growth of breast cancer.