In order to analyze the growth characteristics of a particular cell type or cell line, a growth curve can be established from which one can obtain a population doubling time, a lag time, and a saturation density.

In order to analyze the growth characteristics of a particular cell type or cell line, a growth curve can be established from which one can obtain a population doubling time, a lag time, and a saturation density. A growth curve generally will show the cell population's lag phase, that is, the time it takes for the cells to recover from subculture, attach, and spread; the log phase, in which the cell number begins to increase exponentially and a plateau phase, in which the growth rate slows or stops due to depletion of growth factors and nutrients. An increase in cell number is also a frequently used method of assessing the effect of hormones, nutrients, and so forth on a specific cell type. The culture doubling time, allows prediction of the likely cell concentration at any time in the future (Fig. 4). 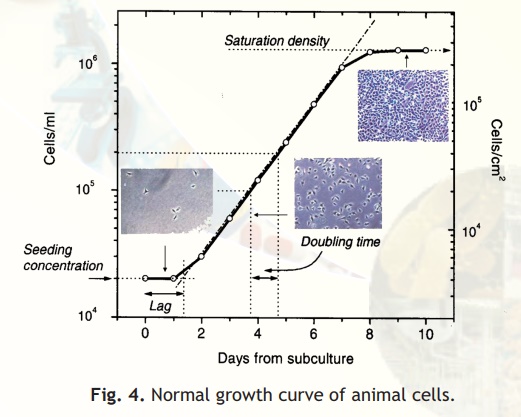 There are laboratories and institutions which maintain various cell lines for scientists to use (for example American Type Culture Collection or ATCC, Virginia, USA). The advantage of using established cell lines is that their growth characteristics, media requirements and responses toselected reagents are established and therefore, convenient for the scientist to use. However, it is important to check the identity of any newly acquired cell line for species of origin, tissue of origin and the maintenance of specific properties.

Once a cell line has been established, its karyotype has to be determined. This will confirm the species of origin, at least for those cells karyotyped, and determine the extent of gross chromosomal changes in the line. Karyotypes may vary from being near normal (i.e., the vast majority of cells in the culture have normal karyotypes) to being aneuploid. While a normal karyotype is desirable, the presence of an abnormal karyotype does not preclude using the cells for in vitro studies, especially if it has been demonstrated that the cells retain the normal function expected of them. If a normal karyotype is required (e.g., cell lines to be used to create transgenic animals), then special care must be taken in handling the cells to minimize chromosomal changes. The stability of the karyotype depends on the species from which the cell lines was derived, the growth conditions used, the way in which the cells are sub-cultured and whether or not the cells are frozen.

Storage and revival of cells

Liquid nitrogen is used for storing cells at very low temperature (-180°C to -196°C). Cells are stored at liquid nitrogen temperatures because the growth of ice crystals is retarded below -130°C. Freezing can be lethal to cells due to the effects of damage by ice crystals, alterations in electrolyte concentration, dehydration and changes in pH. To minimize the effects of freezing, a cryoprotective agent such as glycerol or DMSO, is added. A typical freezing medium is 90% serum, 10% DMSO. Further, it is desirable to use healthy cells that are growing in log phase and to replace the medium 24 hours before freezing. Also, the cells should be slowly cooled from room temperature to -80°C to allow the water to move out of the cells before it freezes.

Frozen cells should be thawed as rapidly as possible by placing the vial containing them into a 37°C water bath with moderate shaking. This is to minimize ice crystal formation, which may damage cells. After thawing the cells can be transferred directly into a tissue culture vessel containing suitable media for further growth.