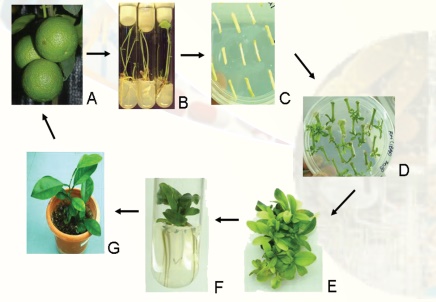 The whole plants can be regenerated virtually from any plant part (referred to as explant) or cells.

The whole plants can be regenerated virtually from any plant part (referred to as explant) or cells. The basic technique of plant tissue culture (Fig. 1) involves the following steps: 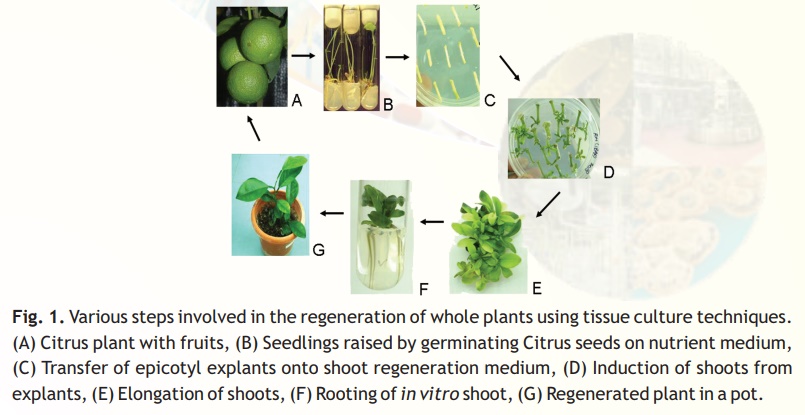 2.     Surface sterilization of the explants by disinfectants (e.g. sodium hypochlorite) and then washing the explants with sterile distilled water.

3.     Inoculation (transfer) of the explants onto the suitable nutrient medium (shootregeneration medium, which is sterilized by autoclaving or filter-sterilized to avoidmicrobial contamination) in culture vessels under sterile conditions (i.e., in laminar flow cabinet). 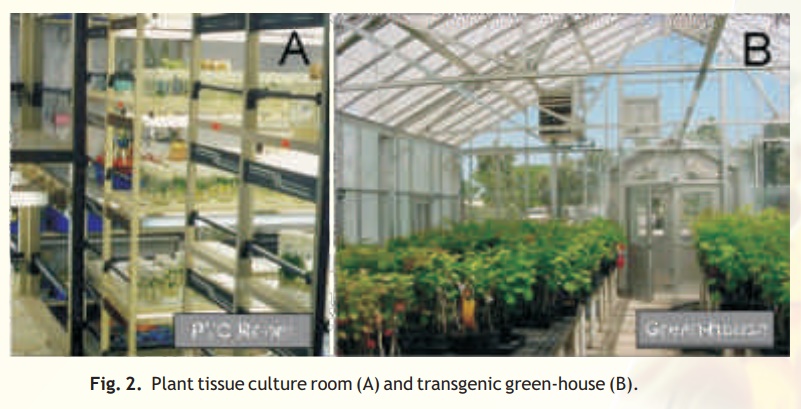 5.     Regeneration of shoots from cultured plant tissues and their elongation.

7.     Transfer of plants to the transgenic green-house (Fig. 2B) or field conditions following the acclimatization (tissue hardening) of the regenerated plants.

The in vitro culture of plant parts or cells require a variety of nutrients and suitable physical conditions, unlike the intact plants which can synthesize their own food and many other essential compounds needed for their growth and development using light, CO2, water and minerals. The composition of plant tissue culture medium can vary, depending upon the type of plant tissues or cells that are used for culture.

There are two kinds of media - liquid and solid media, and in the later case a gelling agent such as agar (a polysaccharide obtained from a red algae,Gelidiumamansii)is added for solidification ofthe medium. There are several types of media like MS, LS, B5 and Nitsch's medium, and the choice of media is dictated by the plant species, variety or plant part. However, the most extensively used nutrient medium is MS medium, which was developed by Murashige and Skoog in 1962. The success of plant regeneration from cultured cells and tissues are largely governed by the composition of the culture medium. The sterilization of nutrient media by autoclaving or membrane filter-sterilization is utmost important to avoid microbial contamination.

Organ culture: It deals with the culture of the isolated organs (like roots) under laboratoryconditions (in vitro), and different names are given depending upon the organ utilized for the culture. For instance, the culture of roots, endosperm, ovary, ovule and anther are called as i) Root culture, ii) Endosperm culture, iii) Ovary culture, iv) Ovule culture and v) Anther culture respectively.

Explant culture: The culture of plant parts (explants) is known as explant culture. The explantscan be any part of the plant like the piece of stem, leaf, cotyledon, hypocotyls, etc. The explantcultures are generally used to induce callus or plant regeneration. 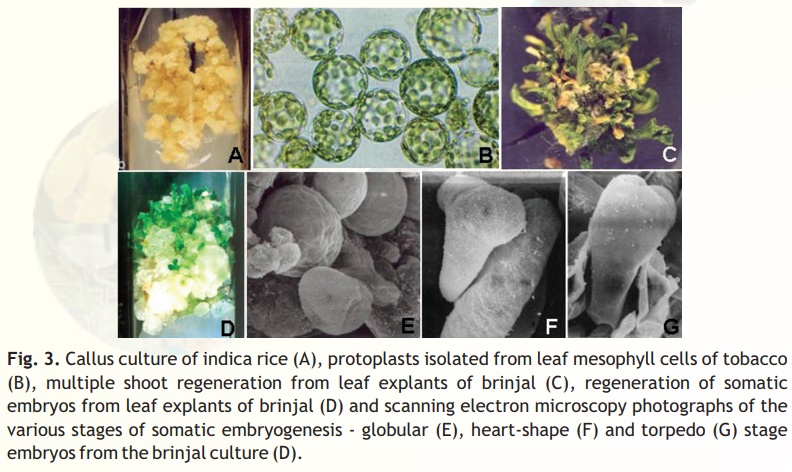 Callus culture: Callus refers to an unorganised mass of cells, which are generallyparenchymatous in nature (Fig. 3A). A variety of plant parts can be induced to show callusing response, but the response varies with the composition of culture media. Generally, auxins are added to culture medium for callus induction but the nature and quantity of auxin added depends on the nature and source of explant and its genotype besides other factors. Callus cultures can be maintained for prolonged period of time by repeated sub-culture. Callus cultures are used for

•         preparation of the single cell suspensions and protoplasts.

Cell suspension cultures: Single cells can be isolated from either callus or any other part of theplant (e.g. leaf) and cultured in liquid medium. Both mechanical and enzymatic methods can be used for isolation of plant cells. Mechanical method involves grinding of the tissue to a fine suspension in a buffered medium followed by filtration/centrifugation to get rid of cell debris. The enzymatic method is based on the usage of enzymes (pectinase/macerozyme), which dissolve the middle lamella between the cells, i.e., the inter-cellular cement, to release single cells. Once the cells have been isolated, they may be cultured by batch cultures or continuouscultures, which have been discussed in detail. The cell suspensioncultures can be used for:

Mass cell culture: It involves the large-scale culture of cells in specially designed 'plantbioreactors', which essentially do not have a stirrer (as plant cells are shear sensitive). In place of stirrer, gas is gently bubbled, which provides stirring as well as meet the demand of a higher oxygen supply. Mass cell cultures are ideal for producing pharmaceutically important secondary metabolites.

Protoplast culture: Protoplasts are plant cells without cell wall (Fig. 3B) and can be isolatedfrom a variety of plant tissues (usually leaves, callus pieces, single cells or pollen grains) by enzymatic method using cell wall digesting enzymes (cellulases, hemicellulases and pectinases). Protoplasts are usually cultured by suspension culture in petri plates. As the protoplasts lack cell wall, they can be utilized for many purposes such as:

Protoplast fusion: The protoplasts from two different plant genotypes can be fused in thepresence of fusogenic agents like polyethylene glycol (PEG - most widely used and most successful method for protoplast fusion) or by electro-fusion. The hybrid cells (heterokaryons) can be selected by various methods such as the use of different antibiotic markers or fluorescent dyes for two different protoplasts. Then, regenerated somatic hybrids from hybrid cells are characterized by morphology and molecular analysis (e.g. RAPD). This technique offers a unique method to raise new genotypes (i.e. somatic hybrids between distantly related plants or cybrids) with useful agronomic traits.

The plants can be regenerated by either organogenesis andsomatic embryogenesis.

Organogenesis means formation of organs like shoots from the cultured explants (Fig. 3C). Millerand Skoog experimentally proved that formation of shoot or root first on the cultured tissue depends on the relative concentration of auxin and cytokinin. If auxins are high in the medium, then it promotes rooting while if cytokinins are high, shoot formation is promoted.