The antibody molecules have two major functions: binding to the antigen, a function that basically depends on the variable regions located on the Fab region of the molecule, and several other extremely important functions.

The antibody molecules have two major functions: binding to the antigen, a function that basically depends on the variable regions located on the Fab region of the molecule, and several other extremely important functions, listed in Table 6.1, which depend on the Fc re-gion. Of particular physiological interest are placental transfer, complement fixation, and binding to Fc receptors. 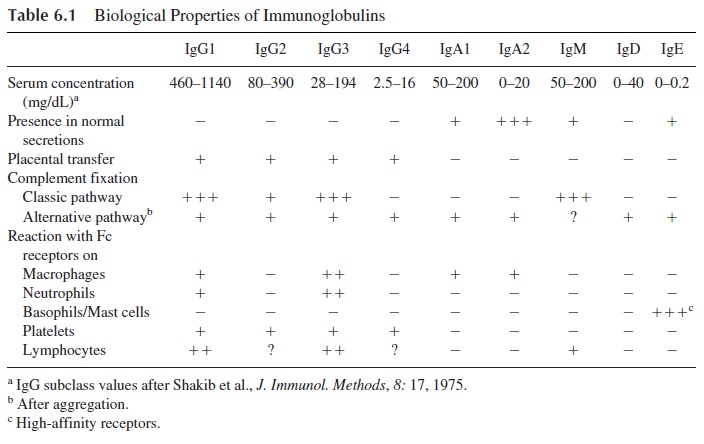 In humans, the only major immunoglobulin transferred from mother to fetus across the pla-centa is IgG. The placental transfer of IgG is an active process; the concentration of IgG in the fetal circulation is often higher than the concentration in matched maternal blood. It is also known that a normal fetus synthesizes only trace amounts of IgG, depending on pla-cental transfer for acquisition of passive immunity against common pathogens.

The selectivity of IgG transport has been explained by Brambell’s receptor theory for IgG catabolism. The trophoblastic cells on the maternal side of the placenta would endo-cytose plasma containing all types of proteins but would have receptors in the en-dopinocytotic vesicles for the Fc region of IgG, and not for any other immunoglobulin. IgG bound to Fcγ receptors would be protected from catabolism and through active reverse pinocytosis would be released into the fetal circulation.

Three pathways  can activate the complement system, and different struc-tural areas of the immunoglobulin molecule are involved in complement fixation by two of them. At the present time, all immunoglobulins have been found able to fix complement by one or the other pathway. IgG1, IgG3, and IgM molecules are the most efficient in fixing complement, all of them through the classical pathway.

Complement activation is an extremely important amplification mechanism, which mediates antibody-dependent neutralization and elimination of infectious agents. These effects depend on two basic mechanisms:

·              Generation of C3b, which, when deposited on the membrane of a microorganism, fa-cilitates phagocytosis by cells with C3b receptors. For this reason, C3b is known as an opsonin.

·              Disruption of lipid bilayers that depends on the generation of the late complement components (C6–C9). When those components are properly assembled on a cell membrane, they induce the formation of transmembrane channels, which results in cell lysis.

FcγRII (CD32), a low-affinity receptor for IgG expressed by phagocytic cells, platelets, and B lymphocytes 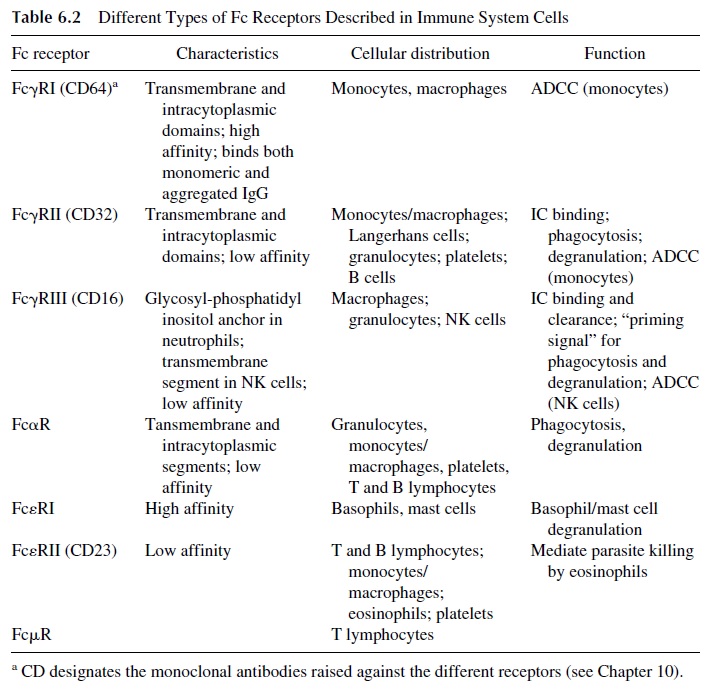 The binding of free or complexed immunoglobulins to their corresponding Fc recep-tors has significant biological implications:

1. As discussed above, the catabolic rate of IgG and the selective placental transfer of IgG depend on the interaction with FcγR on pinocytic vesicles.

2. IgG mediates phagocytosis by all cells expressing FcγR on their membranes (granulocytes, monocytes, macrophages, and other cells of the same lineage). Thus, IgG is also considered an opsonin. IgA (particularly its dimeric form) has also been shown to mediate phagocytosis. However, IgA by itself seems to be a weak opsonin, and complement activation by the alternative pathway seems to significantly enhance this activity. In reality, IgG and C3b have synergistic op-sonizing effects, and their joint binding and deposition on the membrane of an infectious agent is a most effective way to promote its elimination.

3. A common characteristic of Fc receptors (with the exception of Fcµ and Fcδ re-ceptors) is their ability to transduce activating signals to the cells where they are inserted. Activation is mediated by immunoreceptor tyrosine-based activation motifs (ITAMs) located either in the α polypeptide chain (FcγRII) in one or both of the associated chains (γ and β). The activation of ITAMs requires cross-link-ing of Fc receptors by Ag-Ab complexes containing at least two antibody molecules.

4. Granulocytes, monocytes/macrophages, and NK cells can destroy target cells coated with IgG antibody (antibody-dependent cellular cytotoxicity, ADCC). In this case the destruction of the target cell does not depend on opsonization, but rather on the release of toxic mediators.

The specific elimination of target cells by opsonization and ADCC depends on the biding of IgG antibodies to those targets. The antibody molecule tags the tar-get for destruction; phagocytic or NK cells mediate the destruction. Not all anti-body molecules are able to react equally with the Fcγ receptors of these cells. The highest binding affinities for any of the three types of Fcγ receptor known to date are observed with IgG1 and IgG3 molecules.

Two types of Fc receptors specific for IgE have been defined. One is a low-affinity receptor (FcεRII) present in most types of granulocytes. It mediates ADCC reactions di-rected against helminths, which typically elicit IgE antibody synthesis . The other is a high-affinity Fcε  receptor (FcεRI) expressed by basophils and mast cells. The basophil/mast cell-bound IgE functions as a true cell receptor. When an IgE molecule bound to a high-affinity FcεRI membrane receptor interacts with the specific antigen against which it is directed, the cell is activated and, as a consequence, histamine and other mediators are released from the cell. The release of histamine and a variety of other bio-logically active compounds is the basis of the immediate hypersensitivity reaction.