All proteins produced by an organism will eventually be degraded or lost through the excreta.

All proteins produced by an organism will eventually be degraded or lost through the excreta. However, the speed of the metabolic elimination and the fractional turnover rate (the fraction of the plasma pool catabolized and cleared into urine in a day) and the synthetic rate vary considerably from protein to protein. Within the immunoglobulin group, differ-ent immunoglobulin isotypes have different synthetic rates and different catabolic rates.

One of the most commonly used parameters to asses the catabolic rate of im-munoglobulins is the half-life (t 1/2), which corresponds to the time elapsed for a reduction to half of the IgG concentration after equilibrium has been reached. This is usually deter-mined by injecting an immunoglobulin labeled with a radio-isotope (131I is preferred for the labeling of proteins to be used for metabolic studies due to its fast decay rate) and follow-ing the plasma activity curve. Figure 6.4 shows an example of a metabolic turnover study. After an initial phase of equilibration, the decay of circulating radioactivity follows a straight line in a semi-logarithmic scale. From this graph it is easy to derive the time elapsed between concentration n and n/2, i.e., the half-life. 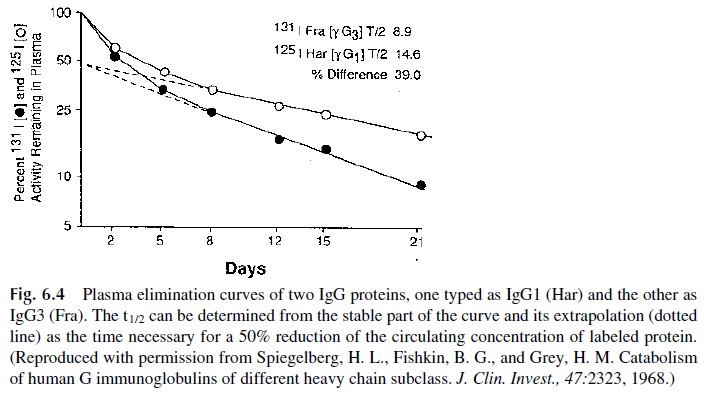 The metabolic properties of immunoglobulins are as follows:

1. IgG is the immunoglobulin class with the longest half-life (21 days) and lowest fractional turnover rate (4–10%/12 hr) with the exception of IgG3, which has a considerably shorter half-life (7 days), close to that of IgA (5–6 days) and IgM (5 days). 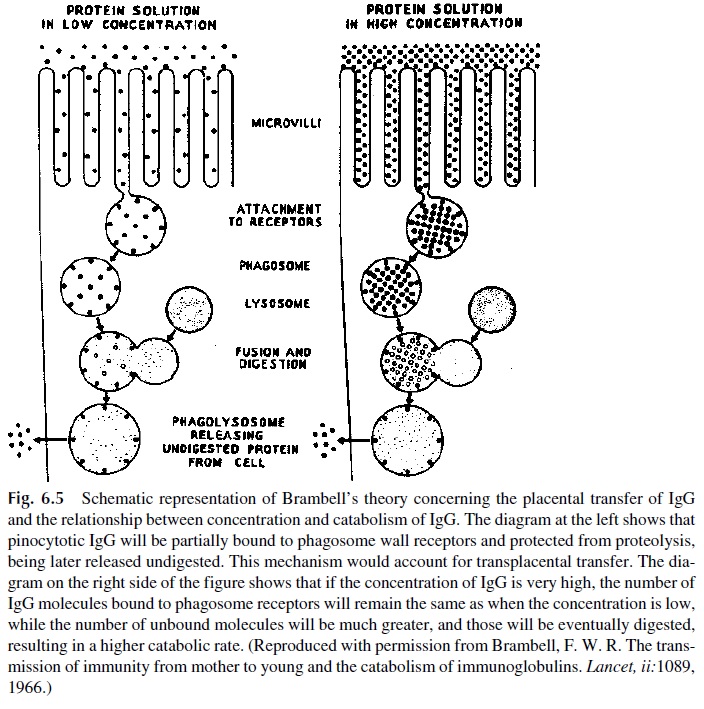 4. The synthetic rate of IgA1 (24 mg/kg/day) is not very different from that of IgG1 (25 mg/kg/day), but the serum concentration of IgA1 is about 1/3 of the IgG1 concentration. This is explained by a fractional turnover rate three times greater for IgA1 (24%/day).

5. The highest fractional turnover rate and shorter half-life are those of IgE (74%/day and 2.4 days, respectively).