Immunoglobulin synthesis is the defining property of B lymphocytes and plasma cells.

Immunoglobulin synthesis is the defining property of B lymphocytes and plasma cells. Rest-ing B lymphocytes synthesize only small amounts of immunoglobulins, which are mainly inserted into the cell membrane. Plasma cells, considered as end-stage cells arrested at the late G1 phase with very limited mitotic activity, are specialized to produce and secrete large amounts of immunoglobulins. The synthetic capacity of the plasma cell is reflected by its abundant cytoplasm, which is extremely rich in endoplasmic reticulum (Fig. 6.1). 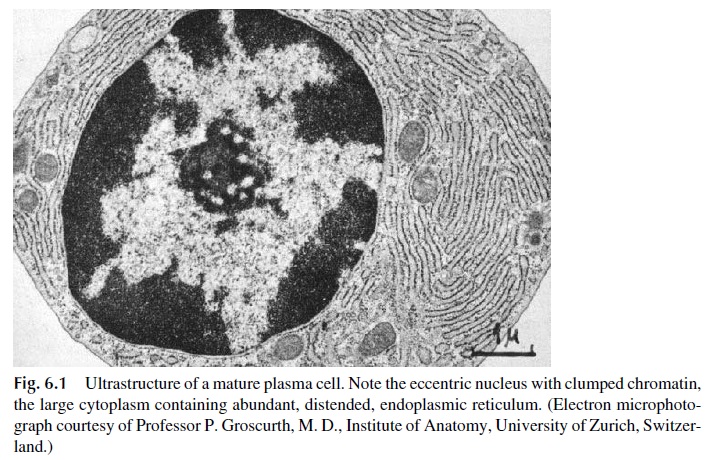 Normally, heavy (H) and light (L) chains are synthesized in separate polyribosomes of the plasma cell. The amounts of H and L chains synthesized on the polyribosomes are usually balanced so that both types of chain will be combined into complete IgG molecules, without surpluses of any given chain. The assembly of a complete IgG molecule can be achieved by 1) associating one H and one L chain to form an HL hemi-molecule, joining in the next step two HL hemi-molecules to form the complete molecule (H2L2), or 2) form-ing H2 and L2 dimers that later associate to form the complete molecule.

Polymeric immunoglobulins (IgM, IgA) have one additional polypeptide chain, the J chain. This chain is synthesized by all plasma cells, including those that produce IgG. How-ever, it is only incorporated to polymeric forms of IgM and IgA. It is thought that the J chain has some role in initiating polymerization, as shown in Figure 6.2. IgM proteins are as-sembled in two steps. First, the monomeric units are assembled. Then, five monomers and one J chain will be combined via covalent bonds to result in the final pentameric molecule. This assembly seems to coincide with secretion in some cells in which only monomeric subunits are found intracellularly. However, in other cells the pentameric forms can be found intracellularly and secretion seems linked to glycosylation. 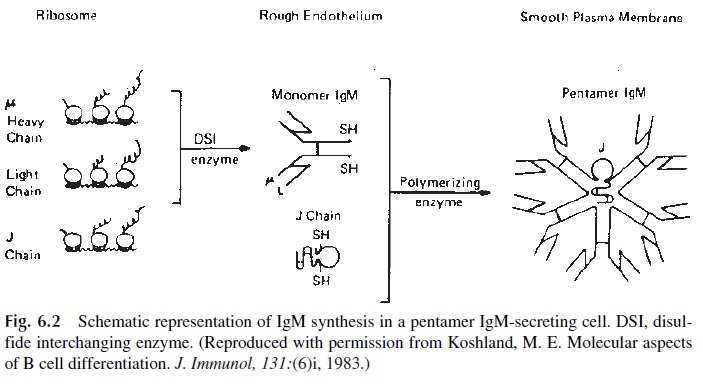 Secretory IgA is also assembled in two stages, but each one takes place in a different cell. Dimeric IgA, containing two monomeric subunits and a J chain joined together by disul-fide bridges, is predominantly synthesized by submucosal plasma cells, although a minor portion may also be synthesized in the bone marrow. Secretory component (SC), on the other hand, is synthesized in the epithelial cells, where the final assembly of secretory IgA takes place. Two different biological functions have been postulated for the secretory component.

First, SC is responsible for secretion of IgA by mucosal membranes. The process in-volves uptake of dimeric IgA, assembly of IgA-SC complexes, and secretion by the mu-cosal cells.

The uptake of dimeric IgA by mucosal cells is mediated by a glycoprotein related to SC, the polyimmunoglobulin receptor (Poly-IgR). Poly-IgR is constituted by a single polypeptide chain of approximately 95,000 daltons, composed of an extracellular portion with five immunoglobulin-like domains, a transmembrane domain, and an intracytoplas-mic domain. It is expressed on the internal surface of mucosal cells and binds J-chain–con-taining polymeric immunoglobulins.

The binding of dimeric IgA to poly-IgR seems to be the first step in the final assem-bly and transport process of secretory IgA. Surface-bound IgA is internalized and poly-IgR is covalently bound to the molecule, probably by means of a disulfide-interchanging en-zyme that will break intrachain disulfide bonds in both IgA and poly-IgR and promote their rearrangement to form interchain disulfide bonds joining poly-IgR to an α chain.

After this takes place, the transmembrane and intracytoplasmic domains of the re-ceptor are removed by proteolytic cleavage, and the remaining five domains remain bound to IgA, as SC, and the complete secretory IgA molecule is secreted (Fig. 6.3). 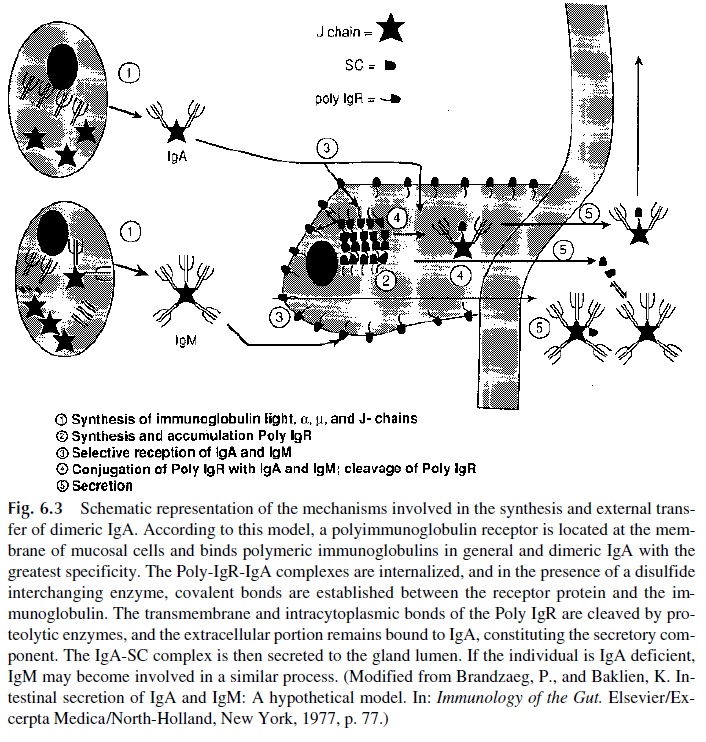 Basically the same transport mechanisms are believed to operate at the hepatocyte level. The hepatocytes produce poly-IgR, bind and internalize dimeric IgA reaching the liver through the portal circulation, assemble complete secretory IgA, and secrete it to the bile. Secretory IgA must also flow back to the bloodstream, because small amounts are found in the blood of normal individuals. Higher levels of secretory IgA in blood are found in some forms of liver disease, when the uptake of dimeric IgA backflowing from the gut through the mesenteric lymph vessels takes place, but its secretion into the biliary system is compromised. Under those circumstances, secretory IgA assembled in the hepatocyte backflows into the systemic circulation.

Among all J-chain–containing immunoglobulins, the poly-IgR has higher binding affinity for dimeric IgA. In IgA-deficient individuals IgM coupled with SC can be present in external secretions. It is believed that the same basic transport mechanisms are involved, starting by the binding of pentameric IgM to the poly-IgR on a mucosal cell and proceed-ing along the same lines outlined for the assembly and secretion of dimeric IgA. The fact that secretory IgM, with covalently bound SC, is detected exclusively in secretions of IgA-deficient individuals is believed to reflect the lower affinity of the interaction between poly-IgR and IgM-associated J chains (perhaps this as a consequence of steric hindrance of the binding sites of the J chain). Therefore, the interaction between IgM and poly-IgR would only take place in the absence of competition from dimeric IgA molecules.

The second function proposed for SC is as a stabilizer of the IgA molecule. This con-cept is based on experimental observations showing that secretory IgA or dimeric IgA to which SC has been noncovalently associated in vitro are more resistant to the effects of pro-teolytic enzymes than monomeric or dimeric IgA molecules devoid of SC. One way to ex-plain these observations would be to suggest that the association of SC with dimeric IgA molecules renders the hinge region of the IgA monomeric subunits less accessible to pro-teolytic enzymes. From a biological point of view, it would be advantageous for antibod-ies secreted into fluids rich in proteolytic enzymes (both of bacterial and host origin) to be resistant to proteolysis.