1. Define chemistry and state its relevance to anatomy and physiology. 2. Define matter, mass, and weight. 3. Distinguish between an element and an atom. 4. Define atomic number and mass number. 5. Name the subatomic particles of an atom, and indicate their location. 6. Compare and contrast ionic and covalent bonds. 7. Explain what creates a hydrogen bond and relate its importance. 8. Differentiate between a molecule and a compound.

1.      Define chemistry and state its relevance to anatomy and physiology.

3.      Distinguish between an element and an atom.

5.      Name the subatomic particles of an atom, and indicate their location.

7.      Explain what creates a hydrogen bond and relate its importance.

8.      Differentiate between a molecule and a compound.

Chemicals make up the body’s structures, and the interactions of chemicals with one another are responsible for the body’s func-tions. The processes of nerve impulse generation, digestion, muscle contraction, and metabolism can all be described in chemical terms. Many abnormal conditions and their treatments can also be explained in chemical terms, even though their symptoms appear as malfunctions in organ systems. For example, Parkinson disease, which causes uncontrolled shaking movements, results from a shortage of a chemical called dopamine in certain nerve cells in the brain. It can be treated by giving patients another chemical, which brain cells convert to dopamine.

A basic knowledge of chemistry is essential for understanding anatomy and physiology. Chemistry is the scientific discipline concerned with the atomic composition and structure of substances and the reactions they undergo.

All living and nonliving things are composed of matter, which is anything that occupies space and has mass. Mass is the amount of matter in an object, and weight is the gravitational force acting on an object of a given mass. For example, the weight of an apple results from the force of gravity “pulling” on the apple’s mass.

The international unit for mass is the kilogram (kg), which is the mass of a platinum-iridium cylinder kept at the International Bureau of Weights and Measurements in France. The mass of all other objects is compared with this cylinder. For example, a 2.2-lb lead weight and 1 liter (L) (1.06 qt) of water each have a mass of approximately 1 kg. An object with 1/1000 the mass of the standard kilogram cylinder is said to have a mass of 1 gram (g).

An element is the simplest type of matter having unique chemical properties. A list of the elements commonly found in the human body appears in table 2.1. About 96% of the body’s weight results from the elements oxygen, carbon, hydrogen, and nitrogen. However, many other elements also play important roles in the human body. For example, calcium helps form bones, and sodium ions are essential for neuronal activity. Some of these elements are present in only trace amounts but are still essential for life.

The characteristics of matter result from the structure, organization, and behavior of atoms. Atoms are composed of subatomic particles,some of which have an electrical charge. The three major types of subatomic particles are neutrons, protons, and electrons. Neutrons (noo′\tronz) have no electrical charge, protons (prō′\tonz) have posi-tive charges, and electrons (e-lek′tronz) have negative charges. The positive charge of a proton is equal in magnitude to the negative charge of an electron. The number of protons and number of elec-trons in each atom are equal, and the individual charges cancel each other. Therefore, each atom is electrically neutral.

Protons and neutrons form the nucleus at the center of the atom, and electrons move around the nucleus (figure 2.1). The nucleus accounts for 99.97% of an atom’s mass, but only 1-ten-trillionth of its volume. Most of the volume of an atom is occupied 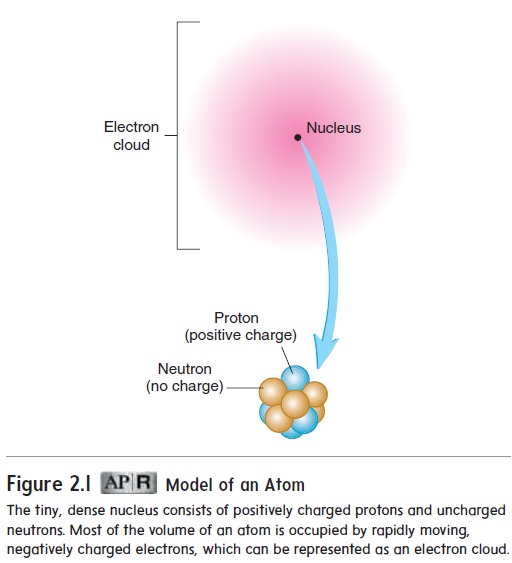 Model of an Atom

The tiny, dense nucleus consists of positively charged protons and uncharged neutrons. Most of the volume of an atom is occupied by rapidly moving, negatively charged electrons, which can be represented as an electron cloud. 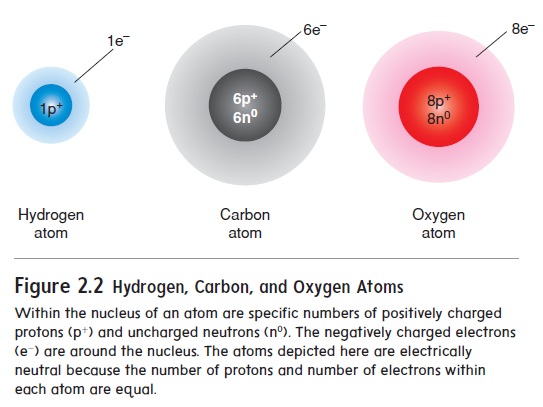 Although it is impossible to know precisely where any given electron is located at any particular moment, the region where electrons are most likely to be found can be represented by anelectron cloud (figure 2.1). 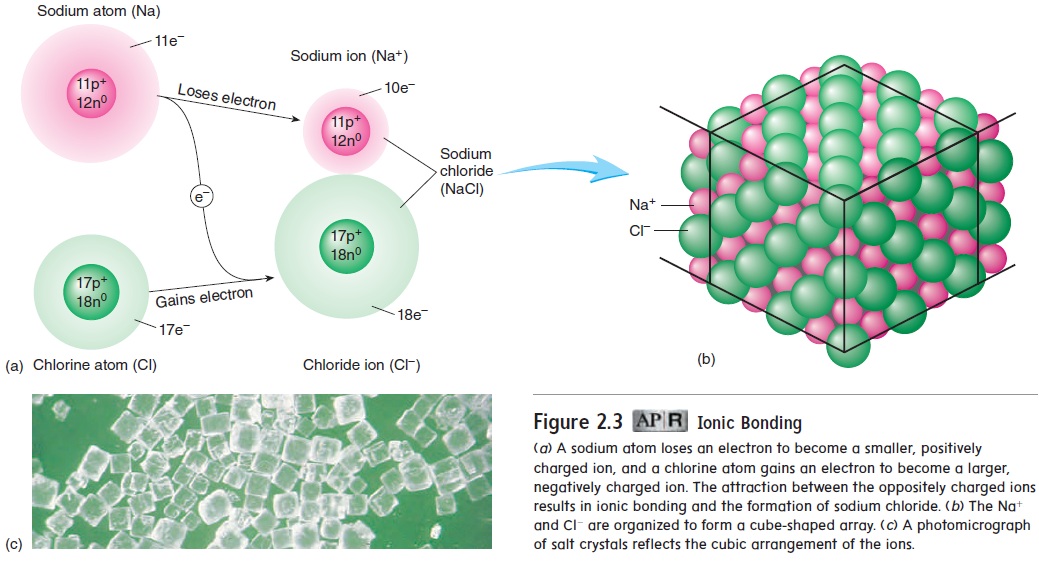 Ions are denoted by using the symbol of the atom from which the ion was formed and adding a plus (+) or minus (−) superscript to indicate the ion’s charge. For example, a sodium ion is Na+, and a chloride ion is Cl−. If more than one electron has been lost or gained, a number is used with the plus or minus sign. Thus, Ca2+ is a calcium ion formed by the loss of two electrons. Table 2.2 lists some ions commonly found in the body. 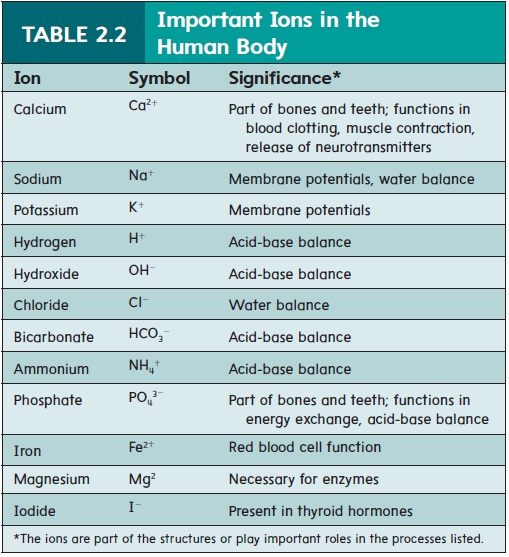 A covalent bond forms when atoms share one or more pairs of electrons. The resulting combination of atoms is called a molecule (mol′\ĕ-kūl). An example is the covalent bond between two hydrogen atoms to form a hydrogen molecule (figure 2.4). Each hydrogen atom has one electron. As the atoms get closer together, the positively charged nucleus of each atom begins to attract the electron of the other atom. At an optimal distance, the two nuclei mutually attract the two electrons, and each electron is shared by both nuclei. The two hydrogen atoms are now held together by a covalent bond. 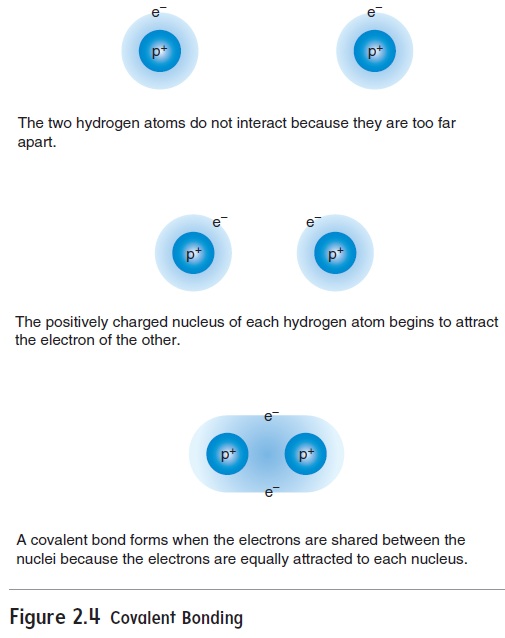 Electrons can be shared unequally in covalent bonds. When there is an unequal, asymmetrical sharing of electrons, the bond is called a polar covalent bond because the unequal sharing of electrons results in one end (pole) of the molecule having a partial electrical charge opposite to that of the other end. For example, two hydrogen atoms can share their electrons with an oxygen atom to form a water molecule (H2O), as shown in figure 2.5. However, the hydrogen atoms do not share the electrons equally with the oxygen atom, and the electrons tend to spend more time around the oxygen atoms than around the hydrogen atoms. Molecules with this asymmetrical electrical charge are called polar molecules. 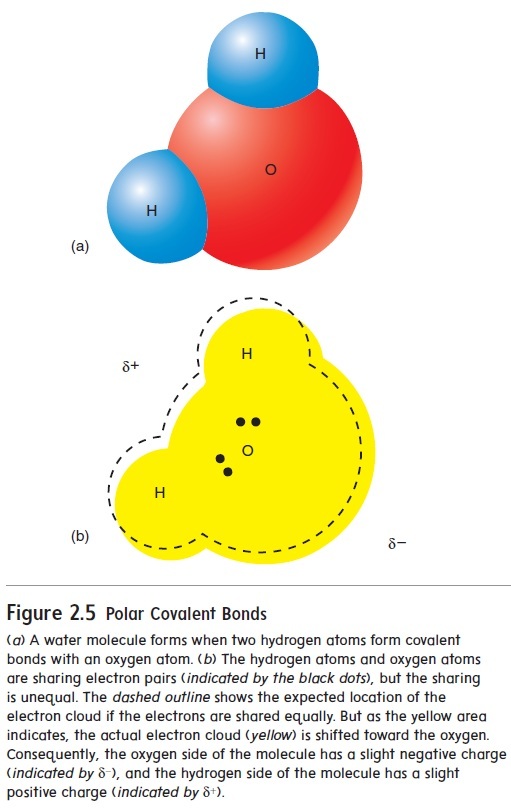 When there is an equal sharing of electrons between atoms, the bond is called a nonpolar covalent bond. Molecules with a symmetrical electrical charge are called nonpolar molecules. 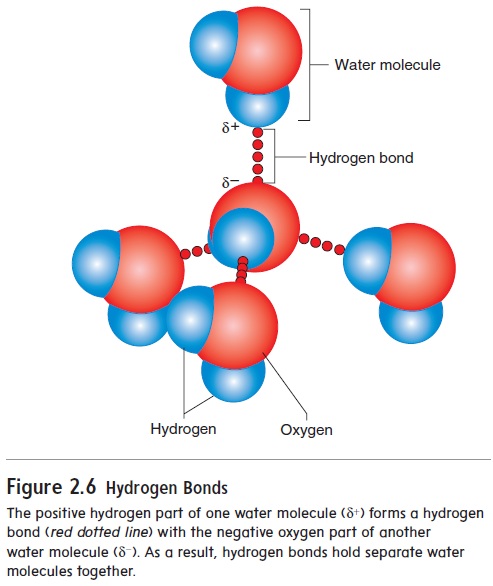 (a) A water molecule forms when two hydrogen atoms form covalent bonds with an oxygen atom. (b) The hydrogen atoms and oxygen atoms are sharing electron pairs (indicated by the black dots), but the sharing is unequal. The dashed outline shows the expected location of the electron cloud if the electrons are shared equally. But as the yellow area indicates, the actual electron cloud (yellow) is shifted toward the oxygen.Consequently, the oxygen side of the molecule has a slight negative charge (indicated by δ−), and the hydrogen side of the molecule has a slight positive charge (indicated by δ+).

Hydrogen bonds also play an important role in determining the shape of complex molecules. The bonds can occur between differ-ent polar parts of a single large molecule to hold the molecule in its normal three-dimensional shape (see “Proteins” and “Nucleic Acids: DNA and RNA” later). Table 2.3 summarizes the important characteristics of chemical bonds (ionic and covalent) and forces between separate molecules (hydrogen bonds). 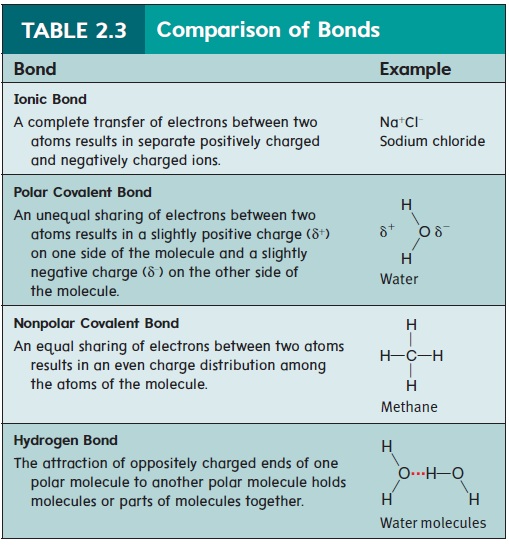 A molecule is formed when two or more atoms chemically com-bine to form a structure that behaves as an independent unit. Sometimes the atoms that combine are of the same type, as when two hydrogen atoms combine to form a hydrogen molecule. But more typically, a molecule consists of two or more different types of atoms, such as two hydrogen atoms and an oxygen atom com-bining to form water. Thus, a glass of water consists of a collection of individual water molecules positioned next to one another.

A compound (kom′\pownd; to place together) is a substance resulting from the chemical combination of two or more different types of atoms.

compound and a molecule. Not all molecules are compounds. For example, a hydrogen molecule is not a compound because it does not consist of different types of atoms.

Some compounds are molecules and some are not. (Remember that, to be a molecule, a structure must be an independent unit.) Covalent compounds, in which different types of atoms are held together by covalent bonds, are molecules because the sharing of electrons results in distinct units. On the other hand, ionic com-pounds, in which ions are held together by the force of attraction between opposite charges, are not molecules because they do not consist of distinct units. Sodium chloride is an example of a sub-stance that is a compound but not a molecule. A piece of sodium chloride does not consist of individual sodium chloride molecules positioned next to one another. Instead, it is an organized array of individual Na+ and individual Cl− in which each charged ion is surrounded by several ions of the opposite charge (see figure 2.3b).

Molecules and compounds can be represented by the symbols of the atoms forming the molecule or compound plus subscripts denoting the quantity of each type of atom present. For example, glucose (a sugar) can be represented as C6H12O6, indicating that glucose is composed of 6 carbon, 12 hydrogen, and 6 oxygen atoms. Letter symbols represent most atoms and molecules.

When ionic compounds dissolve in water, their ions dissociate (di-sō′\sē-āt′\), or separate, from each other because the positively charged ions are attracted to the negative ends of the water molecules, and the negatively charged ions are attracted to the positive ends of the water molecules. For example, when sodium chloride dissociates in water, the Na+ and Cl− separate, and water molecules surround and isolate the ions, keeping them in solution (figure 2.7). These dissociated ions are sometimes called electrolytes (ē-lek′\trō-lı̄tz) because they have the capacity to conduct an electrical current, the flow of charged particles. For example, an electrocardiogram (ECG) is a recording of electrical currents produced by the heart. These currents can be detected by electrodes on the surface of the body because the ions in the body fluids conduct electrical currents. 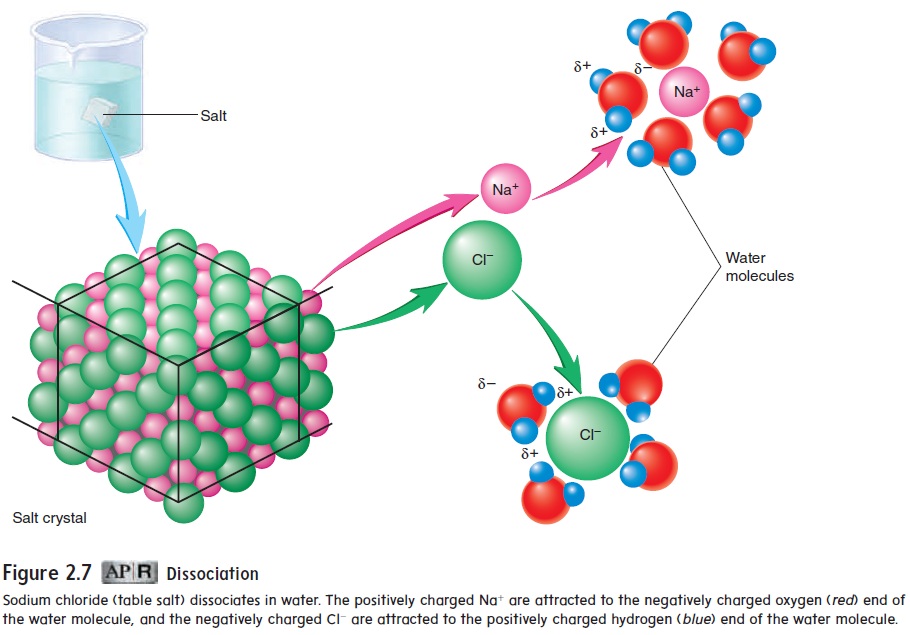