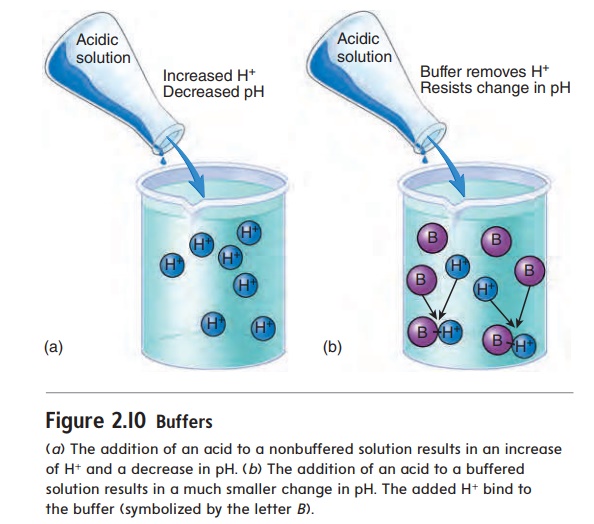 A.Describe the pH scale and its relationship to acidic andbasic solutions. B. Explain the importance of buffers in organisms.

A.Describe the pH scale and its relationship to acidic and basic solutions.

B. Explain the importance of buffers in organisms.

The body has many molecules and compounds, called acids and bases, that can alter body functions. An acid is a proton donor. Because a hydrogen atom without its electron is a proton, any substance that releases hydrogen ions (H+) in water is an acid. For example, hydrochloric acid (HCl) in the stomach forms H+ and chloride ions (Cl−): 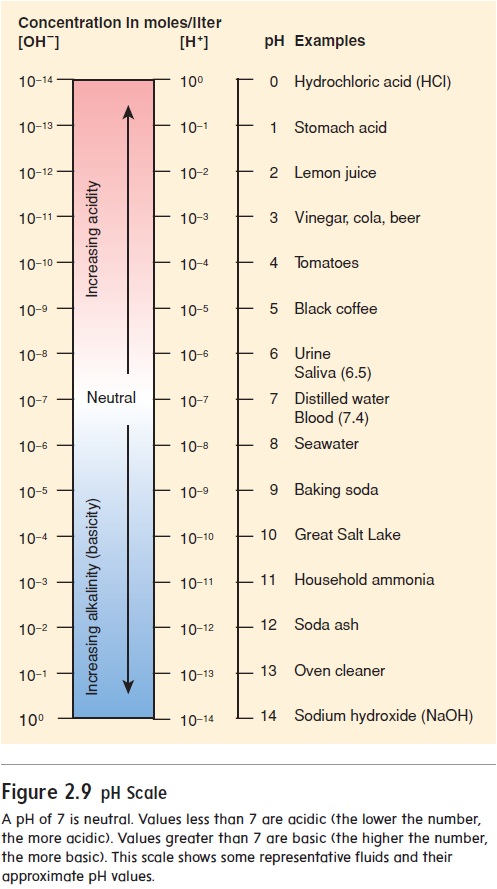 As the pH value becomes smaller, the solution becomes more acidic; as the pH value becomes larger, the solution becomes more basic. A change of one unit on the pH scale represents a 10-fold change in the H+ concentration. For example, a solution with a pH of 6.0 has 10 times more H+ than a solution with a pH of 7.0. Thus, small changes in pH represent large changes in H+concentration.

The normal pH range for human blood is 7.35 to 7.45. If blood pH drops below 7.35, a condition called acidosis (as-i-dō′\sis) results. The nervous system is depressed, and the individual becomes disoriented and possibly comatose. If blood pH rises above 7.45, alkalosis (al-kă-lō′\sis) results. The nervous system becomes overexcitable, and the individual can be extremely nervous or have convulsions. Both acidosis and alkalosis can result in death.

A salt is a compound consisting of a positive ion other than H+ and a negative ion other than OH−. Salts are formed by the reac-tion of an acid and a base. For example, hydrochloric acid (HCl) combines with sodium hydroxide (NaOH) to form the salt sodium chloride (NaCl):

The chemical behavior of many molecules changes as the pH of the solution in which they are dissolved changes. The survival of an organism depends on its ability to maintain homeostasis by keeping body fluid pH within a narrow range. One way normal body fluid pH is maintained is through the use of buffers. A buffer (bŭf′\er) is a chemical that resists changes in pH when either an acid or a base is added to a solution containing the buffer. When an acid is added to a buffered solution, the buffer binds to the H+, preventing these ions from causing a decrease in the pH of the solution (figure 2.10). 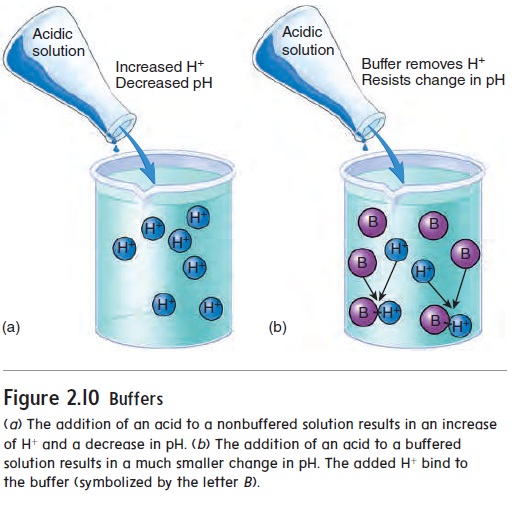