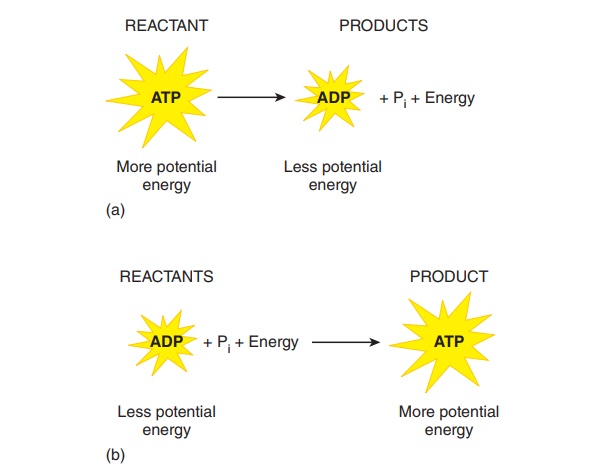 Summarize the characteristics of synthesis, decomposition,and exchange reactions. · Explain how reversible reactions produce chemicalequilibrium. · Distinguish between chemical reactions that release energyand those that take in energy. · Describe the factors that can affect the rate of chemicalreactions.

·        Distinguish between chemical reactions that release energy and those that take in energy.

·        Describe the factors that can affect the rate of chemical reactions.

For our purposes, chemical reactions can be classified as synthesis, decomposition, or exchange reactions.

When two or more reactants combine to form a larger, more complex product, the process is called a synthesis reaction,representedsymbolically as

All of the synthesis reactions that occur in the body are collectively referred to as anabolism (ă-nab′\-ō-lizm). Growth, maintenance, and repair of the body could not take place without anabolic reactions.

The decomposition reactions that occur in the body are collec-tively called catabolism (kă-tab′\-ō-lizm). They include the digestion of food molecules in the intestine and within cells, the breakdown of fat stores, and the breakdown of foreign matter and microorganisms in certain blood cells that protect the body. All of the anabolic and cat-abolic reactions in the body are collectively defined as metabolism.

An example of an exchange reaction is the reaction of hydro-chloric acid (HCl) with sodium hydroxide (NaOH) to form table salt (NaCl) and water (H2O):

An important reversible reaction in the human body occurs when carbon dioxide (CO2) and water (H2O) form hydrogen ions (H+) and bicarbonate ions (HCO3−). The reversibility of the reaction is indicated by two arrows pointing in opposite directions:

Maintaining a constant level of H+ in body fluids is neces-sary for the nervous system to function properly. This level can be maintained, in part, by controlling blood CO2 levels. For example, slowing the respiration rate causes blood CO2 levels to increase, which causes an increase in H+ concentration in the blood.

An example of a reaction that releases energy is the break-down of ATP to ADP and a phosphate group (figure 2.8a). The phosphate group is attached to the ADP molecule by a covalent bond, which has potential energy. After the breakdown of ATP, some of that energy is released as heat, and some is available to cells for activities such as synthesizing new molecules or contract-ing muscles: 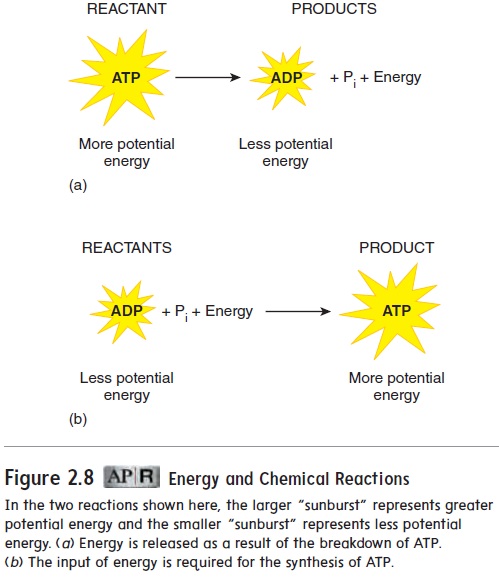 According to the law of conservation of energy, the total energy of the universe is constant. Therefore, energy is neither created nor destroyed. However, one type of energy can be changed into another. Potential energy is converted into kinetic energy. Since the conversion between energy states is not 100% efficient, heat energy is released. For example, as a spring is released, its potential energy is converted to mechanical energy and heat energy. Mechanicalenergy is energy resulting from the position or movement ofobjects. Many of the activities of the human body, such as moving a limb, breathing, or circulating blood, involve mechanical energy.

Why does body temperature increase during exercise?

If the products of a chemical reaction contain more energy than the reactants (figure 2.8b), energy must be added from another source. The energy released during the breakdown of food molecules is the source of energy for this kind of reaction in the body. The energy from food molecules is used to synthesize mol-ecules such as ATP, fats, and proteins:

The rate at which a chemical reaction proceeds is influenced by several factors, including how easily the substances react with one another, their concentrations, the temperature, and the pres-ence of a catalyst.

Reactants differ from one another in their ability to undergo chemical reactions. For example, iron corrodes much more rapidly than does stainless steel. For this reason, during the refurbishment of the Statue of Liberty in the 1980s, the iron bars forming the statue’s skeleton were replaced with stainless steel bars.

Because molecular motion changes as environmental temperature changes, the rate of chemical reactions is partially dependent on temperature. For example, reactions occur throughout the body at a faster rate when a person has a fever of only a few degrees. The result is increased activity in most organ systems, such as increased heart and respiratory rates. By contrast, the rate of reac-tions decreases when body temperature drops. The clumsy move-ment of very cold fingers results largely from the reduced rate of chemical reactions in cold muscle tissue.

At normal body temperatures, most chemical reactions would take place too slowly to sustain life if not for substances called catalysts. A catalyst (kat′\ă-list) increases the rate of a chemical reaction, without itself being permanently changed or depleted. An enzyme is a protein molecule that acts as a catalyst. Many of the chemical reactions that occur in the body require enzymes.