The diluting fluid used for WBC count is Turk’s solution which contains glacial acetic acid and Gentian violet. The glacial acetic acid lyses the red blood cells and the Gentian violet stains the nuclei of the leucocytes. The blood is diluted 1:20 times and the cell are counted under 10X objective of the microscope. The total number of cells counted is expressed in mm3.

1.  The blood is collected till the 0.5 graduation in the pipette.

2.     The diluting fluid is taken till the graduations 11 and 101 of the WBC and RBC pipette respectively.

3.     The blood is diluted and mixed well with the respective diluting fluid by rotating the pipette horizontally several times.

4.     The cover slip is placed on top of the counting chamber.

5.     The tip of the pipette is placed on the counting chamber and fluid discharged till it fills the chambers.

6.     The cells are allowed to settle for several minutes and the ruled area is viewed under the microscope.

• Study the morphology of these components

• Observe the presence of blood parasites

• Study the response of the body to various diseases

The methodology for the preparation of blood smear is as follows (Figure12.11)

1.     Place a drop of blood on a clean glass slide about 1cm from one end

2.     Using another glass slide placed at an angle of about 45o to the previous slide.

3.     Spread the drop of blood quickly in one stroke as a thin film

5.     Allow the slide to dry and wash the excess stain 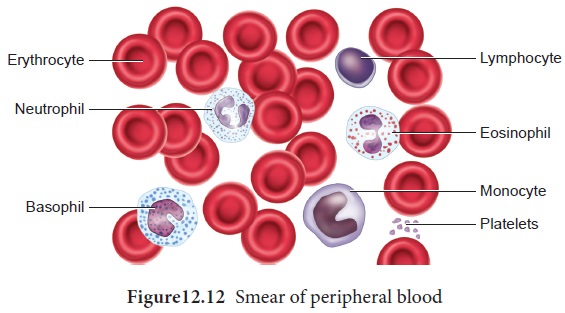 The differential WBC count is the method in which the numbers of different types of white blood cells present in the blood are counted by examining a well stained peripheral blood smear (prepared by the above method). The number of each type of white blood cell is then expressed as a percentage of the total number of cells counted (Figure12.13). 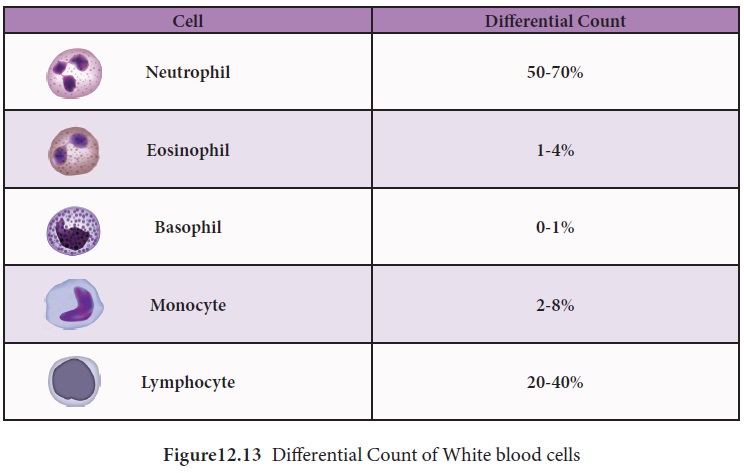