8. Write the normal values of total RBC and WBC

• Pacemaker is a medical device which uses electrical impulses, delivered by electrodes contracting the heart muscles, to regulate the beating of the heart.

• The primary purpose of a pacemaker is to maintain an adequate heart rate, either because the heart's natural pacemaker is not fast enough, or because there is a block in the hearts electrical conducting system.

10. What are the advantages of CT over other imaging techniques?

• It is a medical imaging technology employing tomography, were digital geometry processing is used to generate a three dimentional image of the internals of an object from a large series of two dimentional X –ray images taken around a single axis of rotation.

• Helps in the diagnosis of injuries of the inner ears and sinuses.

• For diagnosis of spinal problems and skeletal injuries.

• To detect stroke causing clots and hemorrhage in the brain.

11. Enumerate the uses of stethoscope

• Stethoscope is a medical device used to hear the internal sounds of the human body such as heart beat, sounds due to inhalation and exhalation of air in the lungs, stomach, intestinal movements and also foetal movements.

• It helps to diagnose lung diseases such as pneumonia, pulmonary edema, bronchitis and pleuritis.

• Stethoscopes along with sphygmomanometer are used to read the blood pressure.

• It outlines the status of cardiac, respiratory and intestinal disorders.

12. Explain the working of MRI

• MRI does not utilize ionizing radiation.

• The radio frequency pulses re-align hydrogen atoms that naturally exist within the body while the patient is in the scanner without causing any chemical changes in the tissues.

• As the hydrogen atoms return to their usual alignment, they emit different amounts of energy that vary according to the type of body tissue from which they come.

• The MR scanner captures this energy and creates a picture of the tissues scanned based on this information.

• The magnetic field is produced by passing an electric current through wire coils in most MRI units.

• Other coils, located in the machine and in some cases, are placed around the part of the body being imaged, send and receive radio waves, producing signals that are detected by the coils.

• The electric current does not come in contact with the patient.

• A computer then processes the signals and generates a series of images, each of which shows a thin slice of the body.

• The images can then be studied from different angles and interpreted by a radiologist.

• EEG is a test to evaluate the electrical activities of the brain.

• Brain cells communicate with each other through electrical impulses.

• It is a graphical recording of the electrical activities of the cortical and sub cortical regions of the brain.

• It is recorded by placing the surface electrodes on the scalp region.

• The electrodes analyse the electrical impulses in the brain and send signals to a computer which records the results.

• In 1929 Germen scientist Hans Berger was the first to analyse the EEG. 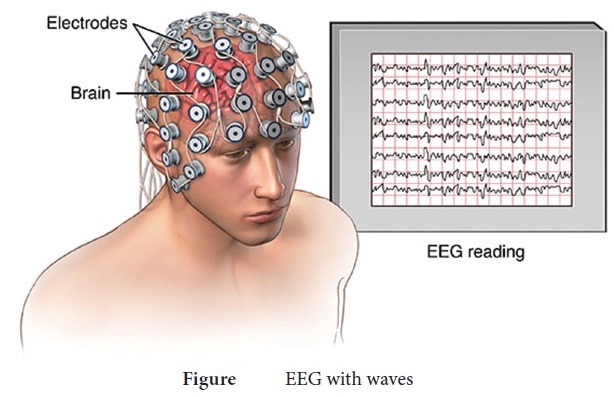 • Ultrasound waves are used to image the foetus at different stages of pregnancy to study the progress of the developing foetus.

• Used in echocardiography to diagnose the damages in heart.

• These radiotracers allow biologic processes to be measured and whole body images to be obtained which demonstrates sites of radiotracer accumulation.

• The most common radiotracer in use today is 18F-fluorodeoxyglucose (18F-FDG) which is a radio labelled sugar (glucose) molecule.

• These atoms are then incorporated by chemical methods into biological molecules like glucose, amino acids and ammonia.

• These positron emitting compounds are then injected in very small amounts into or inhaled by experimental animals or human subjects.

• The three dimensional distribution of the labeled trace is then probed by powerful PET cameras and the images are reconstructed by a computer.

• The quantitative interpretation of the image is done by varying mathematical models.

• They deal with the process of uptake and metabolism of the radioisotope.