At the beginning of the fourteenth century, when the Delhi Sultanate was preparing to extend southwards, the Deccan and south India were divided into four kingdom.

At the beginning of the fourteenth century, when the Delhi Sultanate was preparing to extend southwards, the Deccan and south India were divided into four kingdoms: the Yadavas of Devagiri (Western Deccan or present Maharashtra), the Hoysalas of Dvarasamudra (Karnataka), the Kakatiyas of Warangal (eastern part of present Telengana) and the Pandyas of Madurai (southern Tamil Nadu). During the two expeditions of the general Malik Kafur, first in 1304 and then in 1310, these old states faced defeat one after another and lost most of their accumulated wealth to the plundering raids of the Sultanate army. The Tughluq dynasty continued its southern expeditions into southern India under the rule of his military officers. Muhammad Tughluq (1325–51) even tried to make Devagiri (renamed as Daulatabad) as the capital to command the vast conquered territory more effectively. But his experiments failed and brought misery to the people. When he shifted the capital back to Delhi, his subordinates in the south declared independence. Thus Madurai became an independent Sultanate in 1333. Zafar Khan who declared independence in 1345 at Devagiri shifted his capital to Gulbarga in northern Karnataka. He tookthe title, Bahman Shah and the dynasty he inaugurated became known as the Bahmani dynasty (1347– 1527). A few years earlier, in 1336, the Vijayanagar kingdom was inaugurated by the Sangama brothers Harihara and Bukka at Vijayanagara (presentday Hampi) on the south bank of Tungabhadra. During the next two centuries these two states fought continually and bitterly, to control the rich Raichur doab, and also the sea ports of Goa, Honavar, etc. on the west coast, which were the supply points of the horses needed for their army.

There are several kinds of sources– literary, epigraphical, and archaeological– available for the study of this period. Several Persian accounts written by the court historians of the Bahmani Sultanate, relating to Bahmani– Vijayanagar conflicts have survived. Though they contain some biased and exaggerated information they providerare eye -witness accounts relating to the battles, the palace intrigues, the life and sufferings of the people on either side, etc. which are lacking in inscriptions. The Kannada and Telugu literature, like Manucharitram, Saluvabhyudayam, etc., patronized in the Vijayanagar court, give genealogical, political and social information. The Telugu work Rayavachakamu gives interesting details about the Nayak system under Krishnadevaraya. Several foreign visitors who came to South India during the fourteenth to sixteenth centuries wrote about their travels which throw useful light on the political, social, and cultural aspects. Of them, Ibn Battutah a Moroccan traveller (1333-45), Abdur Razzak from Persia (1443–45), Nikitin, a Russian (1470–74), the Portuguese visitors Domingo Paes and Nuniz (1520–35) provide remarkably rich information.

Thousands of inscriptions in Kannada, Tamil, and Telugu, besides a number of copper-plate charters in Sanskrit are available and the above sources add to the epigraphical information. There are a rich variety of archaeological sources in the form of temples, palaces, forts, mosques, etc. Numismatic evidence is also available in abundance.

The Vijayanagara kings issued a large number of gold coins called Varaha (also called Pon in Tamil and Honnu in Kannada). These gold coins have the images of various Hindu deities and animals like the bull, the elephant and the fabulous gandaberunda (a double eagle, sometimes holding an elephant in each beak and claw). The legend contains the king’s name either in Nagari or in Kannada script. 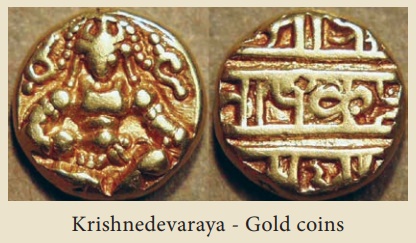