Rivalry with the Vijayanagar kingdom over the fertile Raichur doab, lying between the Krishna and Tungabhadra rivers, not only marked the early history of the Bahmani kingdom, but continued to be an enduring feature over two centuries.

Rivalry with the Vijayanagar kingdom over the fertile Raichur doab, lying between the Krishna and Tungabhadra rivers, not only marked the early history of the Bahmani kingdom, but continued to be an enduring feature over two centuries. Bahman Shah had also to contend in the east with the rulers of Warangal and Orissa. In order to facilitate smooth administration, as followed in the Delhi Sultanate, he divided the kingdom into four territorial divisions called tarafs, each under a governor. Each governor commanded the army of his province (Gulbarga, Daulatabad, Bidar, and Berar) and was solely responsible for both its administration and the collection of revenue. The system worked well under a powerful king, but its dangers became apparent under a weak ruler. For the greater part of his reign of eleven years Bahman was engaged in subduing the unruly in his kingdom and in establishing order. His attempt to exact an annual tribute from the state of Warangal, the Reddi kingdoms of Rajahmundry and Kondavidu, led to frequent wars. Bahman Shah emerged victorious in all these expeditions and assumed the title Second Alexander on his coins.

Mohammed I succeeded Bahman Shah. There was a decade-long war with Vijayanagar, most of which related to control over the Raichur doab. Neither side gained lasting control over the region, in spite of the huge fatalities in battles. Two bitter wars with Vijayanagar gained him nothing. But his attack on Warangal in 1363 brought him a large indemnity, including the important fortress of Golkonda and the treasured turquoise throne, which thereafter became the throne of the Bahmani kings.

Turquoise is a semi-precious stone sky blue in colour. Turquoise throne is one of the bejewelled royal seats of Persian kings described in Firdausi’s Shah Nama.

Mohammed I established a good system of government that was followed by all the successor sultanates as well as by the Marathas later. He appointed a council of eight ministers of state: 1. Vakil-us-saltana or lieutenant of the kingdom, the immediate subordinate of the sovereign. 2. Waziri-kull, who supervised the work of all other ministers; 3. Amir-i-jumla, minister of finance; 4. Wasir-i-ashraf, minister of foreign affairs and master of ceremonies; 5. Nazir, assistant minister for finance; 6. Peshwa who was associated with the lieutenant of the kingdom; 7. Kotwal or chief of police and city magistrate in the capital, and 8. Sadr-i-jahan or chief justice and minister of religious affairs and endowments. He took strong measures for the suppression of highway robbery. Institutional and geographic consolidation under Muhammad Shah laid a solid foundation for the kingdom. He built two mosques at Gulbarga. One, the great mosque, completed in 1367, remainsan impressive building.

The next hundred years saw a number of Sultans one after another, by succession or usurpation. All of them fought with their southern neighbour, but without gaining much territory. In 1425 Warangal was subdued and their progress further eastwards was challenged by the Orissan rulers. The capital was shifted from Gulbarga to Bidar in 1429. The rule of Mohammad III (1463–1482) is worthy of mention because of his lieutenant Mohammed Gawan, a great statesman.

A Persian by birth, Mohammed Gawan was well-versed in Islamic theology, Persian, and Mathematics. He was also a poet and a prose-writer. The Mohammed Gawan Madrasa in Bidar, with a large library, containing 3000 manuscripts, is illustrative of his scholarship. Gawan served with great distinction as prime minister under Mohammad III and contributed extensively to the dynamic development of the Bahmani Kingdom.

Gawan fought successful wars against the rulers of Konkan, Orissa and Vijayanagar. He was known for his administrative reforms. He used Persian chemists to teach the preparation and the use of gunpowder. In his war against the Vijayanagar Kings in Belgaum, he used gunpowder. In order to tighten the administration and to curb the power of provincial governors, who functioned virtually as kings, Gawan divided the existing four provinces of the Bahmani Sultanate into eight. This not only limited the area under the rule of each governor but also made the provincial administration more manageable. He placed some districts in the provinces directly under central administration. Gawan sought to curtail the military powers of the governors by allowing them to occupy only one fort in their territory. The other forts remained under the Sultan’s direct control. The royal officers who were given land assignments as pay were made accountable to the Sultan for their income and expenditure.

The Raja Krishna Dev of the Kakatiya dynasty with Warangal as capital constructed the Golkonda Fort on a granite hill. During 1495–1496 the fort was handed over to Sultan Kali Kutub Khan as a Jagir (land grant). He reconstructed and rechristened the mud fort into a granite fort and called the place Muhammed Nagar. Later, the Golkonda fort came into the possession of the Bahmani dynasty. Still later, the Qutub Shahi dynasty took over and made Golkonda its capital. Golkonda fort owes much of its present grandeur to Mohammad Quli Qutub Shah, the fifth sultan of Qutb Shahi dynasty. The subsequent generations saw Golkonda being fortified further with several additions and the formation of a beautiful city within. By the 17th century, Golkonda was famous as a diamond market. It gave the world some of the best-known diamonds, including the ‘Kohinoor’.

The Golkonda Fort is located about 11 kms from Hyderabad on a hill 120 meters hight. The Golkonda Fort is popular for its acoustic architecture. The highest point of the fort is Bala Hissar. There is said to be a secret underground tunnel which leads from the Durbar Hall to one of the palaces at the foot of the hills.

The Golkonda Fort also houses the tombs of the Qutub Shahis. There are two individual pavilions on the outer side of Golkonda which serve as major architectural attractions. The Fort comprises four other small forts within itself. It has cannons, draw bridges, royal chambers, halls, temples, mosques, stables, etc. The Fateh Darwaza or the Victory Gate is the entrance to the fort. Aurangzeb laid siege to this Golkonda fort in 1687 for about eight months but in vain. It was due to the treachery of an Afghan gate keeper, the fort finally fell.

The administrative reforms introduced by Gawan improved the efficiency of the government, but curtailed the powers of the provincial chiefs, who were mostly Deccanis. So the already existing rivalry among the two groups of nobles, Deccani Muslims and Pardesi (foreigner) Muslims, further intensified and conflicts broke out. Gawan became a victim of this tussle for power, although he remained fair and neutral in this conflict. Jealous of his success they forged a letter to implicate Gawan in a conspiracy against the Sultan. Sultan, who himself was not happy with Gawan’s dominance, ordered his execution.

Gawan’s execution augured ill for the Sultanate. Several of the foreign nobles who were considered the strongest pillars of the state began to leave for their provinces, leading to the disintegration of the Sultanate. After the Sultan’s death five of his descendants succeeded him on the throne but they were kings only in name. During this period the Sultanate gradually broke up into four independent kingdoms: Bijapur, Ahmadnagar, Berar and Golkonda. Bidar where the Bahmani Sultan ruled as a puppet became the fifth one. Among these Bijapur became powerful by annexing Bidar and Berar in course of time. Though Ahmadnagar and Golkonda acted independently they finally joined with Bijapur to fight with their common enemy, Vijayanagar. Vijayanagar was utterly routed in the battle of Talikota or Rakshashi-Tangadi in 1565. Thereafter, within a century, the Sultanates were vanquished one after another and taken over by the Mughal state. 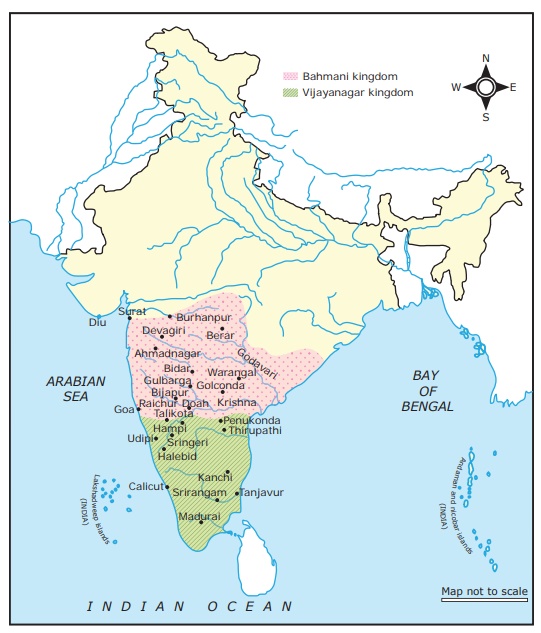