The preceding discussion leads us to conclude that automation is not always the right answer for a given production situation. A certain caution and respect must be observed in applying automation technologies.

The preceding discussion leads us to conclude that automation is not always the right answer for a given production situation. A certain caution and respect must be observed in applying automation technologies. In this section, we offer three approaches for dealing with automation projects:2 (1) the USA Principle, (2) the Ten Strategies for Automation and Production Systems, and (3) an Automation Migration Strategy.

The USA Principle is a common sense approach to automation projects. Similar procedures have been suggested in the manufacturing and automation trade literature, but none has a more captivating title than this one. USA stands for:

A statement of the USA principle appeared in an APICS3 article [4]. The article was concerned with implementation of enterprise resource planning (ERP, Section 26.6), but the USA approach is so general that it is applicable to nearly any automation project. Going through each step of the procedure for an automation project may in fact reveal that simplifying the process is sufficient and automation is not necessary.

Understand the Existing Process.   The obvious purpose of the first step in the

USA approach is to comprehend the current process in all of its details. What are the inputs? What are the outputs? What exactly happens to the work unit between input and output? What is the function of the process? How does it add value to the product? What are the upstream and downstream operations in the production sequence, and can they be combined with the process under consideration?

Some of the basic charting tools used in methods analysis are useful in this regard,such as the operation process chart and the flow process chart [5]. Application of these tools to the existing process provides a model of the process that can be analyzed and searched for weaknesses (and strengths). The number of steps in the process, the number and placement of inspections, the number of moves and delays experienced by the work unit, and the time spent in storage can be ascertained by these charting techniques.

Mathematical models of the process may also be useful to indicate relationships between input parameters and output variables. What are the important output variables? How are these output variables affected by inputs to the process, such as raw material properties, process settings, operating parameters, and environmental conditions? This information may be valuable in identifying what output variables need to be measured for feedback purposes and in formulating algorithms for automatic process control.

Automate the Process. Once the process has been reduced to its simplest form, then automation can be considered. The possible forms of automation include those listed in the ten strategies discussed in the following section. An automation migration strategy (Section 1.5.3) might be implemented for a new product that has not yet proven itself.

Following the USA Principle is a good first step in any automation project. As suggested previously, it may turn out that automation of the process is unnecessary or cannot be cost justified after it has been simplified.

If automation seems a feasible solution to improving productivity, quality, or other measure of performance, then the following ten strategies provide a road map to search for these improvements. These ten strategies were first published in my first book.4 They seem as relevant and appropriate today as they did in 1980. We refer to them as strategies for automation and production systems because some of them are applicable whether the process is a candidate for automation or just for simplification.

Specialization of operations. The first strategy involves the use of special—purpose equipment designed to perform one operation with the greatest possible efficiency. This is analogous to the concept of labor specialization, which is employed to improve labor productivity.

2. Combined operations. Production occurs as a sequence of operations. Complex parts may require dozens, or even hundreds, of processing steps. The strategy of combined operations involves reducing the number of distinct production machines or workstations through which the part must be routed. This is accomplished by performing more than one operation at a given machine, thereby reducing the number of separate machines needed. Since each machine typically involves a setup, setup time can usually be saved as a consequence of this strategy. Material handling effort and nonoperation time are also reduced. Manufacturing lead time is reduced for better customer service.

4. Integration of operations.Another strategy is to link several workstations together into a single integrated mechanism, using automated work handling devices to transfer parts between stations. In effect, this reduces the number of separate machines through which the product must be scheduled. With more than one workstation, several parts can be processed simultaneously, thereby increasing the overall output of the system.

5. Increased flexibility. This strategy attempts to achieve maximum utilization of equipment for job shop and medium volume situations by using the same equipment for a variety of parts or products. It involves the use of the flexible automation concepts (Section 1.3.1). Prime objectives are to reduce setup time and programming time for the production machine. This normally translates into lower manufacturing lead time and less workinprocess.

7. Online inspection. Inspection for quality of work is traditionally performed after the process is completed. This means that any poor quality product has already been produced by the time it is inspected. Incorporating inspection into the manufacturing process permits corrections to the process as the product is being made. This reduces scrap and brings the overall quality of product closer to the nominal specifications intended by the designer.

9. Plant operations control. Whereas the previous strategy was concerned with the control of the individual manufacturing process, this strategy is concerned with control at the plant level. It attempts to manage and coordinate the aggregate operations in the plant more efficiently. Its implementation usually involves a high level of computer networking within the factory.

10.                    Computerintegrated manufacturing (CIM). Taking the previous strategy one level higher, we have the integration of factory operations with engineering design and the business functions of the firm. CIM involves extensive use of computer applications, computer data bases, and computer networking throughout the enterprise.

The ten strategies constitute a checklist of the possibilities for improving the production system through automation or simplification. They should not be considered as mutually exclusive. For most situations, multiple strategies can be implemented in one improvement project.

Owing to competitive pressures in the marketplace, a company often needs to introduce a new product in the shortest possible time. As mentioned previously, the easiest and least expensive way to accomplish this objective is to design a manual production method, using a sequence of workstations operating independently. The tooling for a manual method can be fabricated quickly and at low cost. If more than a single set of workstations is required to make the product in sufficient quantities, as is often the case, then the manual cell is replicated as many times as needed to meet demand. If the product turns out to be successful, and high future demand is anticipated, then it makes sense for the company to automate production. The improvements are often carried out in phases. Many companies have an automation migration strategy, that is, a formalized plan for evolving the manufacturing systems used to produce new products as demand grows. A typical automation migration strategy is the following:

Phase 2: Automated production using single station automated cells operating independently. As demand for the product grows, and it becomes clear that automation can be justified, then the single stations are automated to reduce labor and increase production rate. Work units are still moved between workstations manually.

Phase 3: Automated integrated production using a multistation automated system with serial operations and automated transfer of work units between stations. When the company is certain that the product will be produced in mass quantities and for several years, then integration of the single station automated cells is warranted to further reduce labor and increase production rate.

•   It allows introduction of the new product in the shortest possible time, since production cells based on manual workstations are the easiest to design and implement.

•   It allows automation to be introduced gradually (in planned phases), as demand for the product grows, engineering changes in the product are made, and time is allowed to do a thorough design job on the automated manufacturing system.

It avoids the commitment to a high level of automation from the start, since there is always a risk that demand for the product will not justify it. 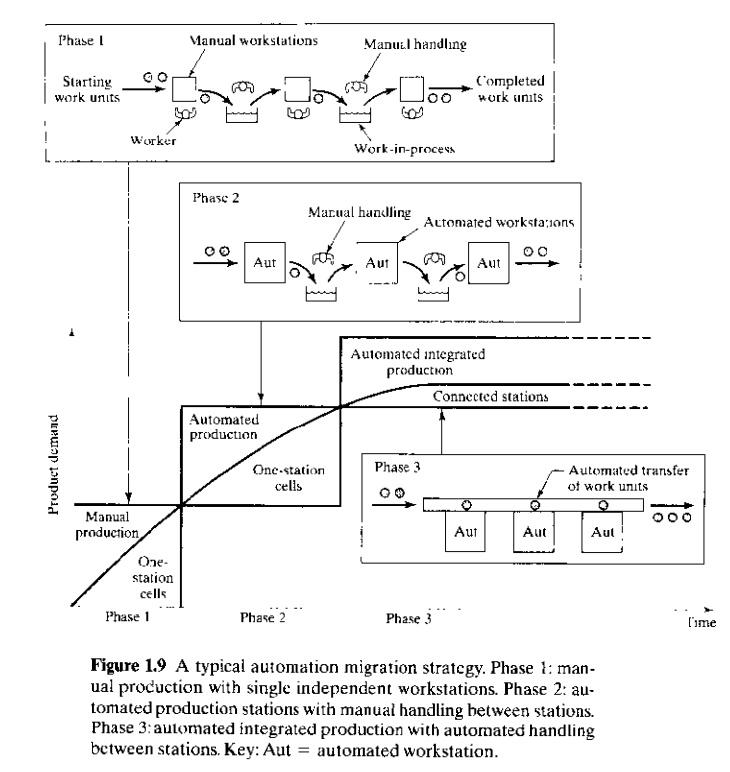