The facilities in the production system are the factory, production machines and tooling, material handling equipment, inspection equipment, and the computer systems that control the manufacturing operations. Facilities also include the plant layout, which is the way the equipment is physically arranged in the factory.

the production of discrete parts and products, compared with products that are in liquid or bulk form, such as chemicals (we examine the distinction in Section 2.1).

If we limit our discussion to discrete products, the quantity produced by a factory has a very significant influence on its facilities and the way manufacturing is organized. Production quantity refers to the number of units of a given part or product produced annually by the plant. The annual part or product quantities produced in a given factory can be classified into three ranges:

1. Low production: Quantities in the range of 1 to 100 units per year.

3. High production: Production quantities are 10,000 to millions of units.

The boundaries between the three ranges are somewhat arbitrary (author’s judgment). Depending on the types of products we are dealing with, these boundaries may shift by an order of magnitude or so. 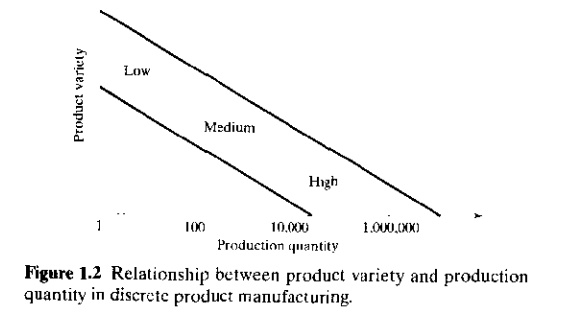 Although we have identified product variety as a quantitative parameter (the number of different product types made by the plant or company), this parameter is much less exact than production quantity is because details on how much the designs differ is not captured simply by the number of different designs. The differences between an automobile and an air conditioner are far greater than between an air conditioner and a heat pump. Products can be different, but the extent of the differences may be small or great. The automotive industry provides some examples to illustrate this point. Each of the U.S. automotive companies produces cars with two or three different nameplates in the same assembly plant, although the body styles and other design features are nearly the same. In different plants, the same auto company builds heavy trucks. Let us use the terms “hard” and “soft” to describe these differences in product variety. Hard product variety is when the products differ substantially. In an assembled product, hard variety is characterized by a low proportion of common parts among the products; in many cases, there are no common parts. The difference between a car and a truck is hard. Soft product variety is when there are only small differences between products, such as the differences between car models made on the same production line. There is a high proportion of common parts among assembled products whose variety is soft. The variety between different product categories tends to be hard; the variety between different models within the same product category tends to be soft.

We can use the three production quantity ranges to identify three basic categories of production plants. Although there are variations in the work organization within each category, usually depending on the amount of product variety, this is nevertheless a reasonable way to classify factories for the purpose of our discussion.

The type of production facility usually associated with the quantity range of 1 to 100 units/year is the job shop, which makes low quantities of specialized and customized products. The products are typically complex, such as space capsules, aircraft, and special machinery. Job shop production can also include fabricating the component parts for the products. Customer orders for these kinds of items are often special, and repeat orders may never occur. Equipment in a job shop is general purpose and the labor force is highly skilled.

A job shop must be designed for maximum flexibility to deal with the wide part and product variations encountered (hard product variety). If the product is large and heavy, and therefore difficult to move in the factory, it typically remains in a single location, at least during its final assembly. Workers and processing equipment are brought to the product, rather than moving the product to the equipment. This type of layout is referred to as a fixed–position layout, shown in Figure 1.3(a). In the pure situation, the product remains in a single location during its entire fabrication. Examples of such products include ships, aircraft, railway locomotives, and heavy machinery. In actual practice, these items are usually built in large modules at single locations, and then the completed modules are brought together for final assembly using largecapacity cranes.

The individual parts that comprise these large products are often made in factories that have a process layout, in which the equipment is arranged according to function or type. The lathes are in one department, the milling machines are in another department, and so on, as in Figure 1.3(b). Different parts, each requiring a different operation sequence, 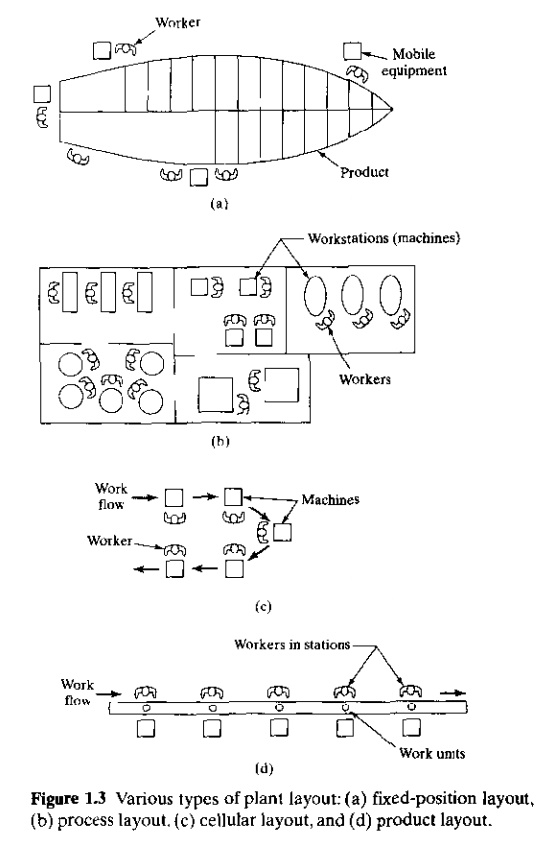 are routed through the departments in the particular order needed for their processing, usually in batches. The process layout is noted for its flexibility; it can accommodate a great variety of alternative operation sequences for different part configurations. Its disadvantage is that the machinery and methods to produce a part are not designed for high efficiency. Much material handling is required to move parts between departments, so inprocess inventory can be high.

In the medium quantity range (100–10,000 units annually), we distinguish between two different types of facility, depending on product variety. When product variety is hard, the traditional approach is batch production, in which a batch of one product is made, after which the facility is changed over to produce a batch of the next product, and so on. Orders for each product are frequently repeated. The production rate of the equipment is greater than the demand rate for any single product type, and so the same equipment can be shared among multiple products. The changeover between production runs takes time. Called the setup time or changeover time, it is the time to change tooling and to set up and reprogram the machinery. This is lost production time, which is a disadvantage of batch manufacturing. Batch production is commonly used in maketostock situations, in which items are manufactured to replenish inventory that has been gradually depleted by demand. The equipment is usually arranged in a process layout, Figure 1.3(b).

An alternative approach to medium range production is possible if product variety is soft. In this case, extensive changeovers between one product style and the next may not be required. It is often possible to configure the equipment so that groups of similar parts or products can be made on the same equipment without significant lost time for changeovers. The processing or assembly of different parts or products is accomplished in cells consisting of several workstations or machines. The term cellular manufacturing is often associated with this type of production. Each cell is designed to produce a limited variety of part configurations; that is, the cell specializes in the production of a given set of similar parts or products, according to the principles of group technology (Chapter 15). The layout is called a cellular layout, depicted in Figure 1.3(c).

Flow line production involves multiple workstations arranged in sequence, and the parts or assemblies are physically moved through the sequence to complete the product. The workstations consist of production machines and/or workers equipped with specialized tools. The collection of stations is designed specifically for the product to maximize efficiency. The layout is called a product layout, and the workstations are arranged into one long line, as in Figure 1.3(d), or into a series of connected line segments. The work is usually moved between stations by powered conveyor. At each station, a small amount of the total work is completed on each unit of product. 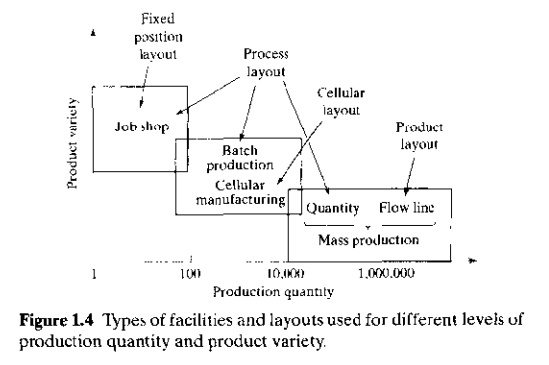 given product, it is often necessary to introduce model variations so that individual customers can choose the exact style and options that appeal to them. From a production viewpoint, the model differences represent a case of soft product variety. The term mixed–model production line applies to those situations where there is soft variety in the products made on the line. Modern automobile assembly is an example. Cars coming off the assembly line have variations in options and trim representing different models (and, in many cases, different nameplates) of the same basic car design.