Some elements of the firm’s production system are likely to be automated, whereas others will be operated manually or clerically. For our purposes here, automation can be defined as a technology concerned with the application of mechanical, electronic, and computerbased systems to operate and control production.

Some elements of the firm’s production system are likely to be automated, whereas others will be operated manually or clerically. For our purposes here, automation can be defined as a technology concerned with the application of mechanical, electronic, and computerbased systems to operate and control production.

Automated manufacturing systems operate in the factory on the physical product.They perform operations such as processing, assembly, inspection, or material handling, in some cases accomplishing more than one of these operations in the same system.They are called automated because they perform their operations with a reduced level of human participation compared with the corresponding manual process. In some highly automated systems, there is virtually no human participation. Examples of automated manufacturing systems include:

•   transfer lines that perform a series of machining operations

Automated manufacturing systems can be classified into three basic types (for our purposes in this introduction; we explore the topic of automation in greater depth in Chapter 3):

Fixed Automation. Fixed automation is a system in which the sequence of processing (or assembly) operations is fixed by the equipment configuration. Each of the operations in the sequence is usually simple, involving perhaps a plain linear or rotational motion or an uncomplicated combination of the two; for example, the feeding of a rotating spindle. It is the integration and coordination of many such operations into one piece of equipment that makes the system complex. Typical features of fixed automation are:

The economic justification for fixed automation is found in products that are produced in very large quantities and at high production rates. The high initial cost of the equipment can be spread over a very large number of units, thus making the unit cost attractive com pared with alternative methods of production. Examples of fixed automation include machining transfer lines and automated assembly machines.

Programmable Automation. In programmable automation, the production equipment is designed with the capability to change the sequence of operations to accommodate different product configurations. The operation sequence is controlled by a program, which is a set of instructions coded so that they can be read and interpreted by the system. New programs can be prepared and entered into the equipment to produce new products. Some of the features that characterize programmable automation include:

•   flexibility to deal with variations and changes in product configuration

•   most suitable for batch production

Programmable automated production systems are used in low and mediumvolume production. The parts or products are typically made in batches. To produce each new batch of a different product, the system must be reprogrammed with the set of machine instructions that correspond to the new product. The physical setup of the machine must also be changed: Tools must be loaded, fixtures must be attached to the machine table, and the required machine settings must be entered. This changeover procedure takes time. Consequently, the typical cycle for a given product includes a period during which the setup and reprogramming takes place, followed by a period in which the batch is produced. Examples of programmable automation include numerically controlled (NC) machine tools, industrial robots, and programmable logic controllers.

Flexible Automation. Flexible automation is an extension of programmable automation. A flexible automated system is capable of producing a variety of parts (or products) with virtually no time lost for changeovers from one part style to the next. There is no lost production time while reprogramming the system and altering the physical setup (tooling, fixtures, machine settings). Consequently, the system can produce various combinations and schedules of parts or products instead of requiring that they be made in batches. What makes flexible automation possible is that the differences between parts processed by the system are not significant. It is a case of soft variety, so that the amount of changeover required between styles is minimal. The features of flexible automation can be summarized as follows:

•   high investment for a customengineered system

Examples of flexible automation are the flexible manufacturing systems for performing machining operations that date back to the late 1960s.

The relative positions of the three types of automation for different production volumes and product varieties are depicted in Figure 1.7. For low production quantities and new product introductions, manual production is competitive with programmable automation, as we indicate in the figure and discuss in Section 1.4.1. 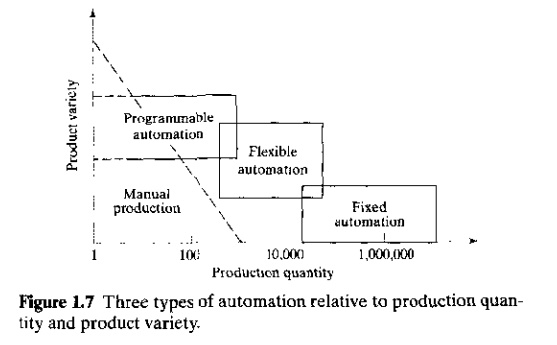 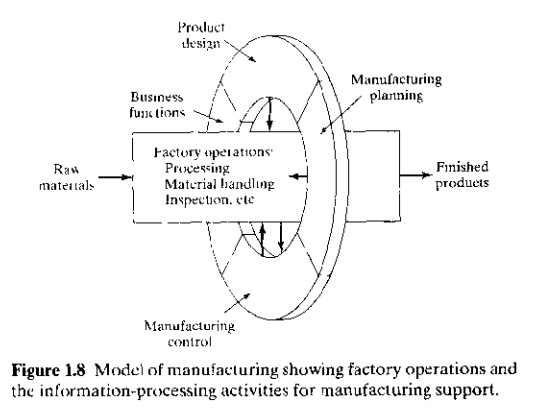 formation—processing activities are accomplished to implement the four basic manufacturing support functions identified earlier: (1) business functions, (2) product design, (3) manufacturing planning, and (4) manufacturing control. These four functions form a cycle of events that must accompany the physical production activities but do not directly touch the product.

2. To reduce labor cost. Everincreasing labor cost has been and continues to be the trend in the world’s industrialized societies. Consequently, higher investment in automation has become economically justifiable to replace manual operations. Machines are increasingly being substituted for human labor to reduce unit product cost.

3. To mitigate the effects of labor shortages. There is a general shortage of labor in many advanced nations, and this has stimulated the development of automated operations as a substitute for labor.

4. To reduce or eliminate routine manual and clerical tasks. An argument can be put forth that there is social value in automating operations that are routine, boring, fatiguing, and possibly irksome. Automating such tasks serves a purpose of improving the general level of working conditions.

To improve worker safety. By automating a given operation and transferring the worker from active participation in the process to a supervisory role, the work is made safer. The safety and physical wellbeing of the worker has become a national objective with the enactment of the Occupational Safety and Health Act (OSHA) in 1970. This has provided an impetus for automation.

6. To improve product quality. Automation not only results in higher production rates than manual operations; it also performs the manufacturing process with greater uniformity and conformity to quality specifications. Reduction of fraction defect rate is one of the chief benefits of automation.

8. To accomplish processes that cannot be done manually. Certain operations cannot be accomplished without the aid of a machine. These processes have requirements for precision, miniaturization, or complexity of geometry, that cannot be achieved manually. Examples include certain integrated circuit fabrication operations, rapid prototyping processes based on computer graphics (CAD) models, and the machining of complex, mathematically defined surfaces using computer numerical control. These processes can only be realized by computer controlled systems.

9. To avoid the high cost of not automating. There is a significant competitive advantage gained in automating a manufacturing plant. The advantage cannot easily be demonstrated on a company’s project authorization form. The benefits of automation often show up in unexpected and intangible ways, such as in improved quality, higher sales, better labor relations, and better company image. Companies that do not automate are likely to find themselves at a competitive disadvantage with their customers, their employees, and the general public.