Asia is the largest and the most populous continent in the world. It covers about 30 percent of the world’s land area and about 60 percent of the world’s population. Most of the land of Asia lies in the northern hemisphere. It has different types of physical and cultural features. Lofty mountains, plateaus, plains, islands and peninsulas are the major physiographic features of Asia. Many perennial rivers flow through different parts of Asia. These river valleys are the cradles of ancient civilizations (Indus valley, Mesopotamian and Chinese civilizations). Let us know more about our home continent. 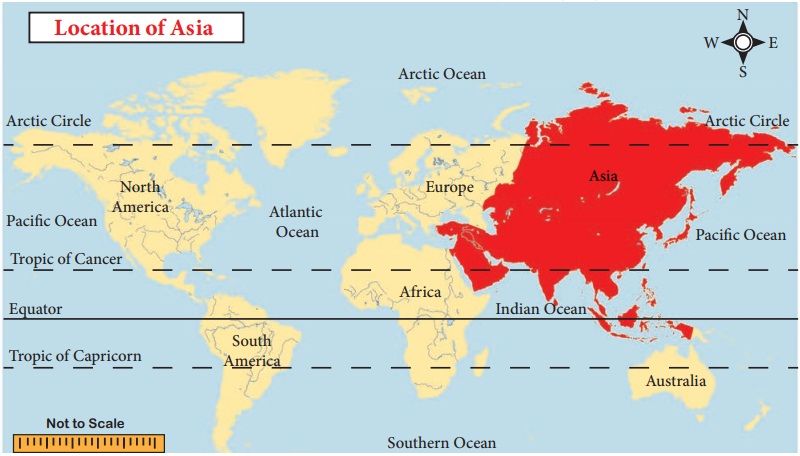 There are forty eight countries in Asia. The countries are grouped into several realms based on landscape and political status such as 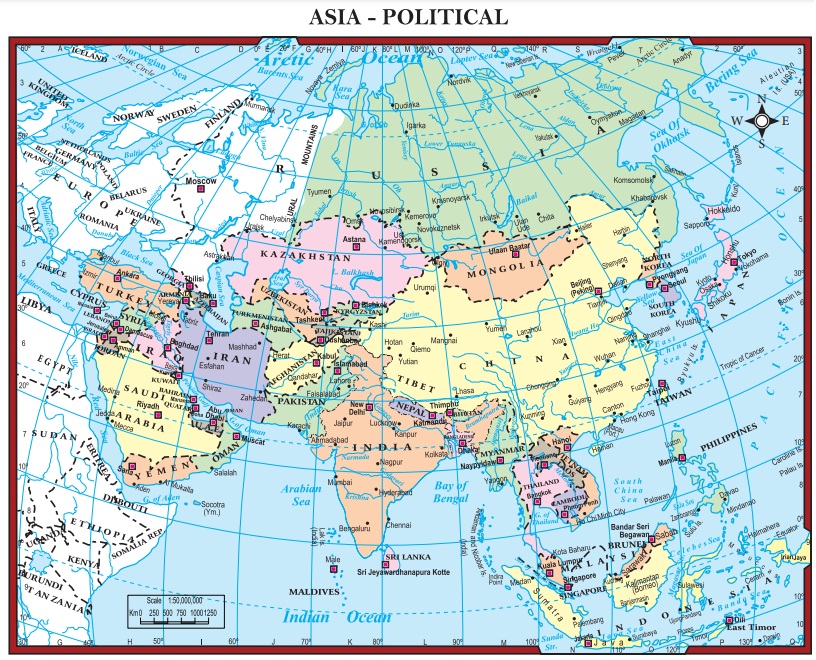 The physiography of Asia can be divided into five major groups. They are;

4. The Great Plains and

The most extensive lowland in Asia is the Siberian plain. It extends from the Ural Mountains in the west to the Verkhoyansk Range in the east.

The central highlands stretches from Turkey to the Bering Strait. There are two knots found in Asia. They are 1. The Pamir Knot 2.The Armenian Knot.

'Knot' refers to the on vergence of mountain ranges

The Hindukush range, the Sulaiman range, the Himalayan range and the Tian Shan range radiate from the Pamir Knot. 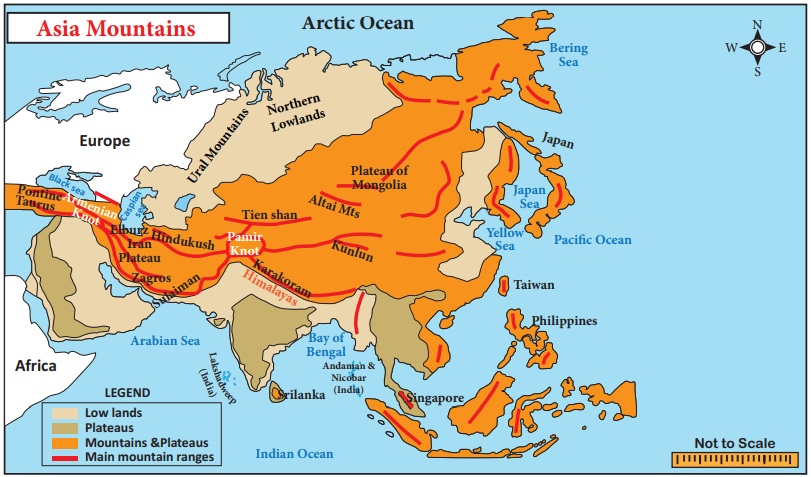 Mountain Ranges radiate from the Pamir and the Armenian Knot

The Hindukush range continues westward as the Elburz, whereas the Sulaiman range continues south west as the Zagros range. The Elburz and the Zagros converge at the Armenian knot. The Taurus and the Pontine ranges radiate from the Armenian knot. The other important mountain ranges are the great Khingan, the Altai, the Verkoyansk and the Arakan yoma. The Himalayan mountain range is the highest mountain range in the world Mt. Everest (8848 m) is the highest peak in Asia, as well as the world.

The lowest point in the world is located in Dead Sea in Asia. Intermontane plateaus are found in these mountain ranges. The important plateaus are

1. The plateau of Anatolia (Pontine to Taurus)

2. The plateau of Iran (Elburz to Zagros mt)

Tibet is called the ‘Roof of the world’ and it is also known as the third pole because of its cold weather, largest reserve of freshwater and inhospitable environment. 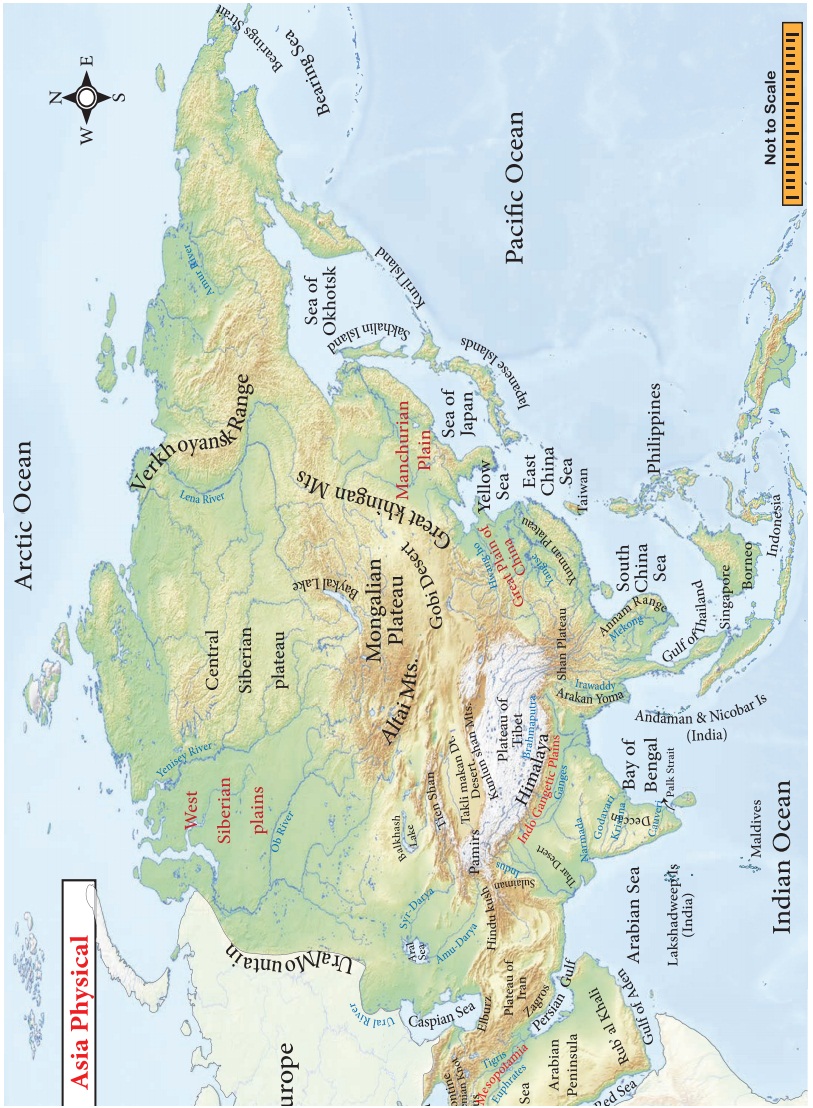 The great plains are formed by the major rivers of Asia. They are the West Siberian plain (Ob and Yenisey), Manchurian Plain (Amur), Great Plain of China (Yangtze and Sikiang), Indo- Gangetic Plain (Indus and Ganga), Mesopotamian plain (Tigris and Euphrates) and the Irrawaddy plain (Irrawaddy).

Numerous islands are found in the Pacific coast of Southeast Asia. Kuril, Taiwan, Singapore and Borneo are the important island groups.

The Philippines, Japan islands and Indonesia are the major archipelagos in Asia. Smaller archipelagos are also located in the Indian Ocean such as the islands  of Maldives and Lakshadweep in the Arabian Sea. Bahrain is in the Persian Gulf. Sri Lanka is an island, which is located in the Bay of Bengal.

A group of islands is called an archipelago. The  largest archipelago is Indonesia.

The rivers of Asia originate mostly from the central highlands. The Ob, Yenise and Lena are the major rivers that flow towards the north and drain into the Arctic Ocean. These rivers remain frozen during winter. On the other hand, South Asia has many perennial rivers (e.g.) Brahmaputra, Indus, Ganga and Irrawaddy which originate from the snow covered high mountains that do not freeze during winter. The Euphrates and Tigris flow in West Asia. The Amur, Huang He, Yangtze and Mekong rivers flow in the south and south eastern parts of Asia. Yangtze is the longest river in Asia.

The Three Gorges dam has been constructed across the river Yangtze. It is the largest power station dam in the world. It fulfills ten percent of power needs of China. 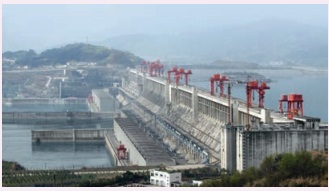 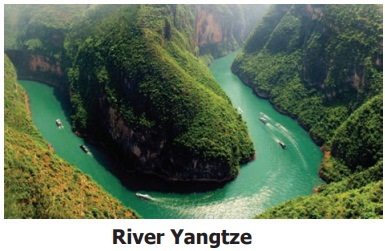 The south, south east and eastern parts of Asia are strongly influenced by monsoon winds. Summer is hot and humid while winter is cool and dry. The summer monsoon winds bring heavy rainfall to India, Bangladesh, Indo-China, Philippines and Southern China (1500 mm to 2500 mm). In India, Mawsynram (11871 receives the highest rainfall. So, this place is called the wettest place in the world.

The areas found in and around the equator have uniform climate throughout the year. There is no winter. The average temperature is 27°C and the mean rainfall is 1270 mm.

There is no winter in the equatorial region. Why?

The west and central parts of Asia have hot, dry climate. The temperature is very high during the day and very low during the night. Rainfall varies from 25 mm to 200 mm. The West coastal fringe of Asia (along the Mediterranean Sea) receives rainfall in winter and is warm in summer.

Deserts are found along the western part of Asia. The major hot deserts are the Arabian (Saudi Arabia) and Thar (India and Pakistan) deserts. The cold deserts of Asia are Gobi and Taklamakan. The largest desert in Asia is the Arabian Desert.

Natural vegetation depends upon rainfall, temperature and soil. As Asia stretches from the equator to poles, all types of vegetation are found here. Some rare species are found in Asia. (Orang-Utan, Komodo Dragon, Giant panda ).The Asian flora and fauna are listed below: 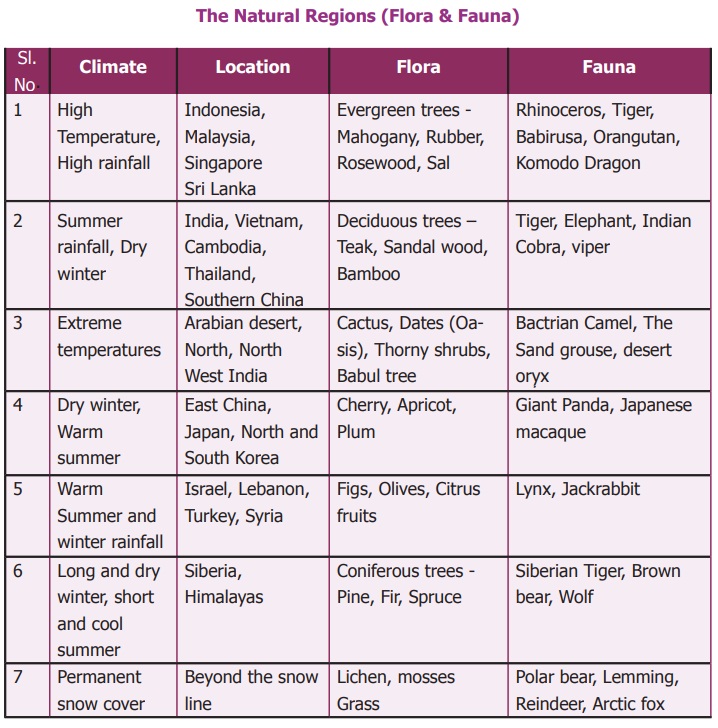 A Desert is a large area that gets very low rainfall and very few plants and animals. There are two types of deserts found in Asia, Hot and cold deserts. Rub’al Khali desert is thelargest, continuous sandy desert in the world.It is found in the southeastern part of Saudi Arabia.

Resource Base and Economic Activities of Asia

Asia has a variety of mineral deposits. It holds an important place in the production of Iron, Coal, Manganese, Bauxite, Zinc, Tungsten, Petroleum, Tin etc. Oil and Natural Gas found in the west Asian countries. One third of the world’s oil is produced in Asia. Among the west Asian countries, Iran has a considerable wealth of mineral resources. The important minerals found in Asia are:

Iron Ore: Asia has the largest deposits of iron ore in the world. China and India are the important iron ore deposit countries of Asia. Turkey, Philippines, Malaysia, Thailand, Myanmar etc., are a few other countries that have iron ore deposits. 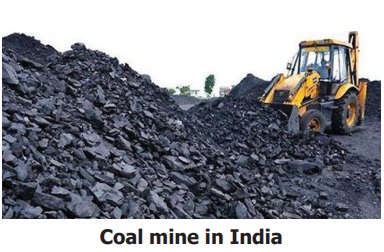 Only about 18 percent of the total area is cultivable in Asia. Agriculture is the chief occupation of the people here. The river valleys in the South, South East and East Asia have rich alluvial soil. Agriculture is intensively practised in the riverine plains of Asia. However, some areas are not suitable for agricultural practices. India has the largest area of arable lands in Asia. Most of the west Asian countries cultivate their crops where the ground water level is nearer to the surface. Iraq practices agricultural activities based on the availability of rainfall and supply of water from Euphrates and Tigris rivers.

Rice and Wheat are the staple food crops in Asia. China and India are the leading producers of rice in the world. Other important rice producing countries are Myanmar, Japan, Bangladesh and Thailand. Monsoon Asia is suitable for rice cultivation because of the abundant rainfall, fertile plains and availability of labour. Thailand is called the Rice bowl of South East Asia. 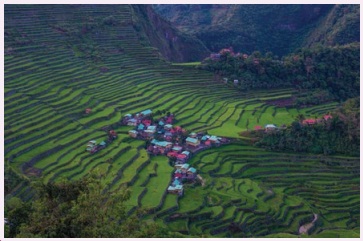 Jute and cotton are the important natural fibres cultivated in Asia. One third of the world’s cotton is produced by Asia.

The major cotton producing countries are India, China, Russia and Kazakhstan. India, Pakistan, China and Bangladesh are the leading producers of jute.

The tropical wet and dry climate is suitable for sugarcane cultivaiton in Asia. India, Indonesia and Philippines are the major producers of sugarcane. Coffee, Tea, Rubber, Palm trees and Cocoa are the important plantation crops.

Dates are produced in west Asia, among the countries Iran is the largest producer of dates in the world. 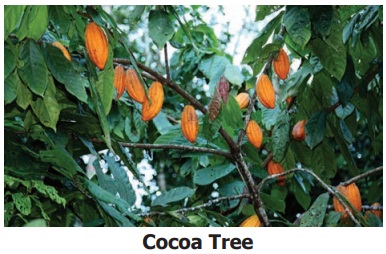 Fishing is an important economic activity in Asia. It is prevalent in open seas as well as inland water bodies. China and Japan are the leading fishing nations. In Cambodia, Tonle Sap lake is one of the world’s richest sources of fresh water fishing. Bay of Bengal is the major fishing ground for India, Sri Lanka, Myanmar and Bangladesh. Fishing is the mainstay of the national economy in Maldives. Pearl fishing (Bahrein) is popular in the eastern coast of Arabia.

Transport is the backbone of the economic development of a region. Many Asian countries are developing their transport network for their economic progress. Roadway is the most common mode of transport in Asia.

The Trans - Siberian Railways (9258 km) is the longest rail route in the world. It is a transcontinental railway line which connects Leningrad and Vladivostok. The Trans Asian Railway links Singapore and Istanbul in Turkey. The Shinkansen, bullet train is the world famous super express train that runs between Osaka and Tokyo in Japan at a speed of 352 km/h. The Indian railway network is the second largest railway network in Asia. 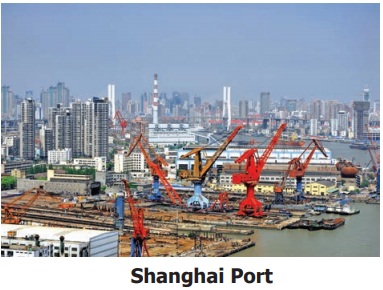 Asia is the most populated continent in the world. Approximately six-tenth of the world’s population lives in Asia. The population is unevenly distributed because of various physical features. China and India alone covers three fifth of Asia’s population. Apart from these two countries, Bangladesh, Indonesia, Japan, Pakistan and Philippines have more than 100 million populations. The population density in Asia is 143 persons per Km2. India, Japan, Bangladesh and Singapore have high population density. River plains and industrial regions have high density of population, whereas low density is found in the interior parts of Asia.

Few countries in Asia have high population. Give reasons

ANKORWAT: It is a world heritage site. It was built by king Suriya Varma II in 1100 AD (CE) at Cambodia. 'Ankorwat' means 'the city of temples' in Khmer language. It is the largest Hindu Temple in the world. 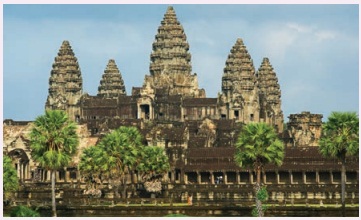 Hinduism, Islam, Buddhism Christianity and Sikhism are the major creeds in Asia. The minor creeds Zoroastrianism, Jainism, Shintoism, Confucianism and Taoism are also practised in Asia. Mandarin, English Indonesian, Japanese, Arabic, Korea, Vietnamese and Hindi are the most widely spoken languages in Asia.

Asia is the home land of three civilizations.(Mesopotamian, Indus valley and Chinese civilizations).These three contributed to the architectural works at an early stage.

Among the seven wonders of the world, two are located in Asia (The Tajmahal in India, The Great wall of China).The people of Yemen built a mud skyscraper thousands of years ago. Ankorwat in Cambodia, Buddhist Temple in East and Southeast Asia, Mosques in west Asia and the temples and forts in India are fine examples of Asian architecture.

Rice, Wheat, Maize and Barley are the staple food in Asia. Dairy products, fruits and nuts are also consumed. In East Asia, bread and noodles are the staple food where rice is not available. Tea, Coffee and green tea are the chief beverages. In West Asia, meat, herbs and olive oil are the prime ingredients in their food. 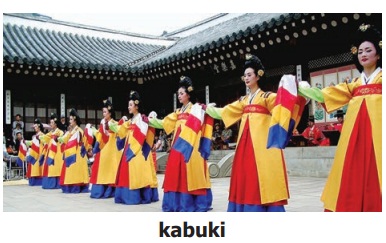 In Asia, Yangee, Dragon Dance, Kabaki are popular in East Asia Ram Thai in Thailand, Bhangra, Kathak and Bharathanatyam in India are also important dances in Asia. Sufi music and Arabic classical music are common in west Asia. Tinikling is the national dance of Philippines. 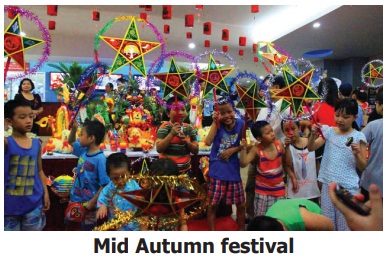 Asia is the biggest continent. It has different types of land features such as mountain, plateau, plain, valley, bay, island etc. It also has different climatic conditions from the equator to polar region. Apart from this, many races, languages, religions and cultures are followed by people who live in Asia. So, Asia is called 'the land of contrasts'.