Home | | Human Neuroanatomy(Fundamental and Clinical) | Arrangement of Neurons within the Central Nervous System
Posted On :  22.07.2017 11:29 pm

Arrangement of Neurons within the Central Nervous System

The bulk of the CNS is, however, made up of neurons that lie entirely within it. As explained earlier, the cell bodies of these neurons are invariably located in masses of grey matter.

Arrangement of Neurons within the Central Nervous System

So far we have considered the arrangement of neurons:

a.              having cell bodies that lie within the brain and spinal cord, and sending out efferent processes that leave the CNS to form the motor fibres of peripheral nerves; and

b.              having cell bodies located in ganglia outside the CNS, but sending processes into it.

The bulk of the CNS is, however, made up of neurons that lie entirely within it. As explained earlier, the cell bodies of these neurons are invariably located in masses of grey matter. The axons may be short, ending in close relation to the cell body (short axon neurons or Golgi type II neurons), or may be long (long axon neurons or Golgi type I neurons) and may travel to other masses of grey matter lying at considerable distances from the grey matter of origin. The neurons within the CNS are interconnected in an extremely intricate manner. The description that follows illustrates some of the basic arrangements encountered.

The simplest pathways are those concerned with reflex activities, such as the contraction of a muscle in response to an external stimulus. For example, if the skin of the sole of a sleeping person is scratched, the leg is reflexly drawn up. Let us see how this happens. The simplest possible arrangement is shown in Fig. 3.4. The stimulus applied to skin gives rise to a nerve impulse which is carried by the peripheral process of a unipolar neuron to the spinal ganglion. From here the impulse passes into the central process which terminates by directly synapsing with an anterior horn cell supplying the muscle which draws the leg up. The complete pathway constitutes a reflex arc and in the above example it consists of two neurons − one afferent and the other efferent. As only one synapse is involved the reflex is monosynaptic. In actual practice, however, the reflex arc is generally made up of three neurons as shown in Fig. 3.5. The central process of the dorsal nerve root ganglion cell ends by synapsing with a neuron lying in the posterior grey column. This neuron has a short axon that ends by synapsing with an anterior horn cell, thus completing the reflex arc. The third neuron interposed between the afferent and efferent neurons is called an internuncial neuron, or simply an interneuron. For obvious reasons such a reflex is said to be polysynaptic. It is important to know that various tendon reflexes are dependent on monosynaptic reflex arcs.

Some reflexes are protective e.g., withdrawal of the hand when a hot object is touched. In such a movement involving withdrawal joints of the extremity are flexed. Such reflexes are, therefore, also called flexor reflexes. When a person is standing a series of reflexes are active to prevent him from falling. As these keep the body straight (with the hip and knee joints extended) they are called extensor reflexes, or antigravity reflexes. Maintenance of posture, through such reflexes) isinfluenced by the membranous labyrinth, the cerebellum and other centres in the brain. Vision is also important in maintaining correct posture.

Every time a stimulus reaches a neuron it does not mean that it must become active and must produce an impulse. A neuron receives inputs from many neurons (in some cases from hundreds of them). Some of these inputs are facilitatory and others are inhibitory. Activity in the neuron (in the form of initiation of an impulse) depends on the sum total of these inputs. Thus, each neuron may be regarded as a decision-making centre. The greater the number of neurons involved in any pathway, the greater the possibility of such interactions. Viewed in this light it will become clear that interneurons interposed in a pathway increase the number of levels at which ‘decisions’ can be taken. It will also be appreciated that most of the neurons within the nervous system are, in this sense, interneurons which are involved in numerous highly complex interactions on which the working of the nervous system depends. 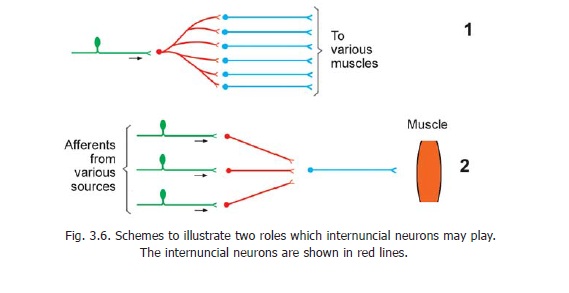 From what has been said above it will be seen that some activities occur due to reflex action, and may involve only neurons within the spinal cord. However, most activities of the spinal cord are subjected to influence from higher centres. In the more complicated types of activity several higher centres may be involved and the pathways may be extremely complicated. Afferent impulses reaching these higher centres (e.g., the cerebral cortex) would appear to be somehow stored and this stored information (of which we may or may not be conscious) is used to guide responses to similar stimuli received in future. This accounts for memory and for learning processes.

From the above it will be appreciated that in a study of the nervous system we must first of all have some knowledge of the various masses of grey matter in the CNS and of their interconnections. The functional significance of some of these connections is easily understood, but in many others it is only a matter of conjecture. Some of the connections can be demonstrated anatomically. Evidence of others can be obtained by physiological methods, while a large number of finer connections no doubt remain unknown.