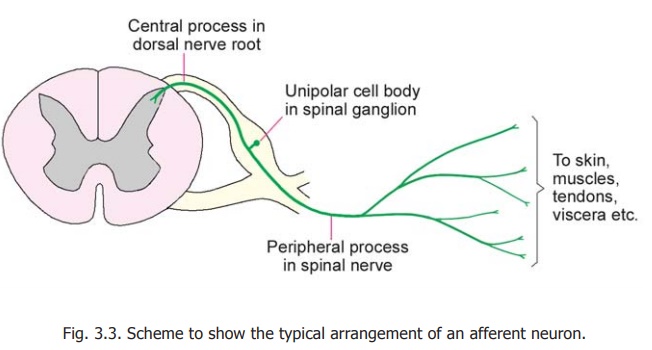 The cell bodies of neurons that give rise to efferent fibres of peripheral nerves are located within the brain and spinal cord. In contrast, the cell bodies of neurons that give rise to afferent fibres are located outside the CNS. In the case of spinal nerves the cell bodies lie in the spinal ganglia; and in the case of the cranial nerves they lie in sensory ganglia (e.g., the trigeminal ganglion) associated with these nerves. We may illustrate the arrangement with reference to a spinal nerve (Fig. 3.3). The cells of the dorsal nerve root ganglion are of the unipolar variety described. Each cell gives off a single process that divides into a peripheral process and a central process. The peripheral process extends into the spinal nerve and courses through its branches to reach the tissue or organ supplied. It may branch repeatedly during its course. We have already seen that these peripheral processes are functionally dendrites as they convey impulses towards the cell body, but they are indistinguishable in structure from axons. These processes constitute the sensory fibres of peripheral 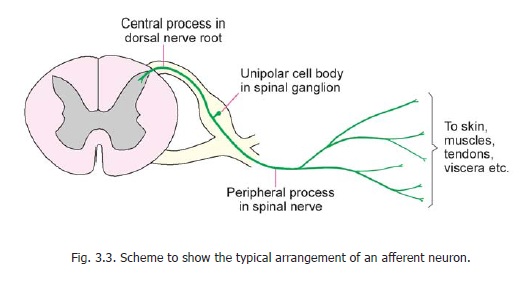 The sensory ganglia of the fifth, seventh, ninth and tenth cranial nerves are made up of cells similar to those of the spinal ganglia. Their central processes end by synapsing with cells in the sensory nuclei of these nerves. The sensory ganglia of the eighth nerve (i.e., the cochlear and vestibular ganglia) are peculiar in that their neurons are bipolar, the two processes corresponding to the central and peripheral processes of unipolar neurons.